Towards a Jupiter Weather Forecast

This article was originally posted on Leigh Fletcher's blog and is reposted here with permission.

Trying to keep track of the ever-changing face of Jupiter is a pretty big challenge, given that it is prone to unexpected outbursts of spots, plumes and weird meteorological activity, in addition to large-scale variations between the ever-present belts and zones. Far from having a static and unchanging appearance, Jupiter is a dynamic world that can fascinate and surprise every time we turn our telescopes towards it.

Researchers here on planet 3 have only just begun to investigate the enormous forces and energy shaping the colourful bands that we see, and for some of us (cough cough) it's a life-long process of trying to understand what's going on deep within planet number 5. For that ambitious goal, we'll need to throw our whole arsenal of atmospheric science at the problem - cloud microphysics and haze formation; thermochemistry, photochemistry and ion chemistry; meteorology, dynamics and circulation; and many other strands of natural science. These are all diverse pieces of a puzzle that, when assembled into a whole, will allow us to understand the changing face of Jupiter, with implications for how atmospheres 'work' throughout our solar system.

But the starting point is an account of the phenomenology, looking for patterns and trying to explain how what we observe (changing colours and discrete spots, waves and bands) is related to the shifting environmental conditions and deep atmospheric flows. Amateur observers, or citizen scientists, have amassed a truly incredible amount of data, an observational record that now spans many decades. As astronomy opens up further, and the use of WebCam technology to capture 'lucky images' through our turbulent atmosphere becomes more mature, we're faced with a mountain of observational data to parse through.

Thankfully, there are dedicated teams out there doing just that, and keeping we "professionals" updated with what's changing on Jupiter (I use the term "professionals" lightly, meaning the few of us getting paid to do our hobby). The problem is that the data is scattered far and wide, and it's not very easy to stay 'current' on what's going on. I'm going to try to keep track of Jupiter's changing weather on this blog, and I'm basically summarising the enormous efforts of the British Astronomical Association's Jupiter Section, headed by my friend and colleague Dr. John Rogers. John works closely with the JUPOS Project, a great team of software developers and astronomers who keep track of jovian features at regular intervals, measuring winds and identifying new phenomena within Jupiter's atmosphere.

The diagram above provides the necessary starting point for discussing Jupiter's ever changing weather. Jupiter's powerful jet streams whip east and west in the troposphere - prograding jets (i.e., going with the direction of planetary rotation) go from west to east (westerlies), retrograding jets (i.e., going against the planet's rotation) go from east to west (easterlies). These jets separate the coloured bands, and instabilities on the jets can excite waves, storms and vortices. The forces powering these jets is still a subject of debate, but they have been shown to be reasonably constant over time. Indeed, it's excursions from the norm that get people excited (amateurs and professionals alike).

Zones are typically brighter than belts, which have a red-brown appearance. The colour differences are possibly (but not definitely) related to upwelling in zones and subsidence in belts). The names of the most prominent features are shown in the diagram on the left, and moving from equator to pole they become more and more obscure. But they form the framework in which Jupiter's climate can be discussed. In future blog posts, I'll try to subdivide these as follows:

1. Tropical Domain: Comprises the equatorial zone (EZ) between two fast-moving prograde jets at 7N (NEBs jet) and 7S (SEBn jet); the North Equatorial Belt (NEB) from 7N to the retrograding jet at 18N (NEBn jet); and the South Equatorial Belt (SEB) from 7S to the fastest retrograding jet on the planet, the SEBs jet at 20S. Poleward of the SEB and the NEB are two further zones, the South Tropical Zone (STropZ) and North Tropical Zone (NTropZ) that go up to prograde jets at 25N and 27S. These mid-20s jets define the edges of the tropical domain. Jupiter's Great Red Spot (GRS) sits within this domain, impinging on both the SEB and the STrZ and disrupting the flow of the retrograding jet at 20S (the SEBs jet). Note that there are some more ephemeral features here too, like a reddish equatorial belt (EB) and a whitish SEB zone (SEBZ) that form every once in a while (right hand side of the left figure in the diagram).

2. Temperate Domain: Zones and belts become more closely packed as we move to higher and higher latitudes beyond the mid-20s. The darker belts are characterised by prograde jets at the equatorward edge and retrograding jets at their poleward edge. In the southern hemisphere we have the South Temperate Belt (STB), Southern Temperate Zone (STZ), then a series of further belts known as SSTB, SSTB, S3TB, etc. The north follows suit with the NTB, NTZ, NNTB, NNTZ, etc. Things get more and more complex, and in practise we find notable spots (e.g., newly forming red spots or white ovals) or outbreaks within these narrow bands. For example, Oval BA sits within the South Temperate Belt.

3. Polar Domain: The organised patterns of the belts and zones finally give way to turbulent structures in the northern and southern polar regions (NPR and SPR), where high hazes and small-scale chaotic structures appear to dominate, bounded by prograde jets that exhibit waves. The polar regions are the hardest to view from Earth so you won't hear much about their meteorology (until Juno provides us with a better view in 2016-17).

With this organisation in place, we can begin to discuss what's going on in each region, summarising the Herculean efforts of the amateur community to record these details. It's then up to the atmospheric scientists to try to explain what's being recorded - and we're by no means there yet. But in the next few years, with these expanding climatological databases, a Jupiter weather forecast might just be within our grasp. 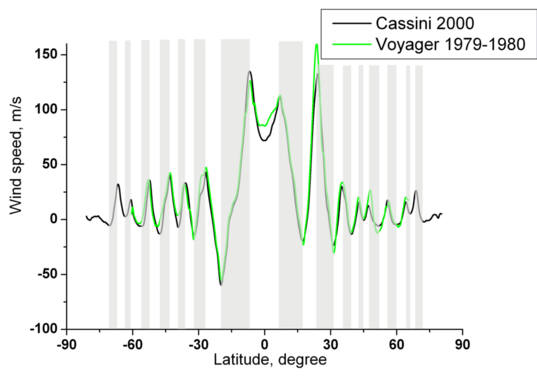 Zonal wind speeds measured by both Voyager and Cassini, showing the relationship between the banded structure and the prograde and retrograde jet streams. The shaded areas correspond to the locations of belts. From Vasavada and Showman (2005), Jovian atmospheric dynamics: an update after Galileo and Cassini, Reports on Progress in Physics 68: 1935–1996. 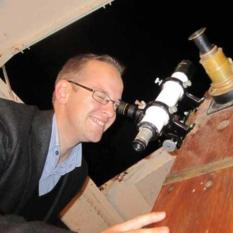