The Deep Space Climate Observatory (DSCOVR) has begun sending us fresh, whole-hemisphere images of our own fragile planet. The spacecraft is located near the Lagrange point in the Sun-Earth system known as L1, which is situated on the line between Earth and Sun, about 1.5 million kilometers from Earth. Some sources say that the spacecraft is "orbiting" the L1 point. I think this warrants some scrutiny! 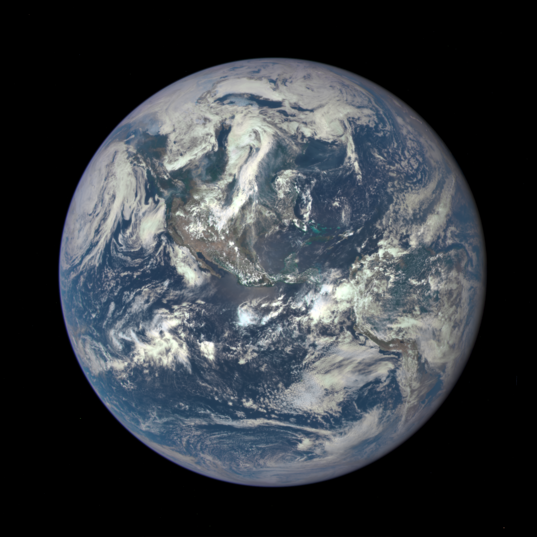 This is the Deep Space Climate Observatory (DSCOVR) mission's first view of the entire sunlit side of Earth from 1.6 million kilometers away. It was taken by the Earth Polychromatic Imaging Camera (EPIC), a four-megapixel CCD camera and telescope. The image was taken July 6, 2015, and shows North and Central America. The central turquoise areas are shallow seas around the Caribbean islands. This Earth image shows the effects of sunlight scattered by air molecules, giving the image a characteristic bluish tint. For more about how this image was taken, read this blog post.

The DSCOVR spacecraft is orbiting the Sun. So are you and I, as we ride our planet on its yearly circuit. Objects that orbit the Sun at a closer distance, such as Venus, normally go around faster; Venus's year is only 225 Earth-days long. This is not so, though, at the Sun-Earth L1 point! Here, the Earth's gravity balances out the Sun's gravity, and an object at L1 will have the very same solar orbit period as the Earth: one year.

The Lagrange points are fascinating places for many reasons. They are described in more detail on JPL's Basics of Space Flight tutorial, near the bottom of this page. Here is an illustration that shows the contours of orbital energy associated with Lagrange points: 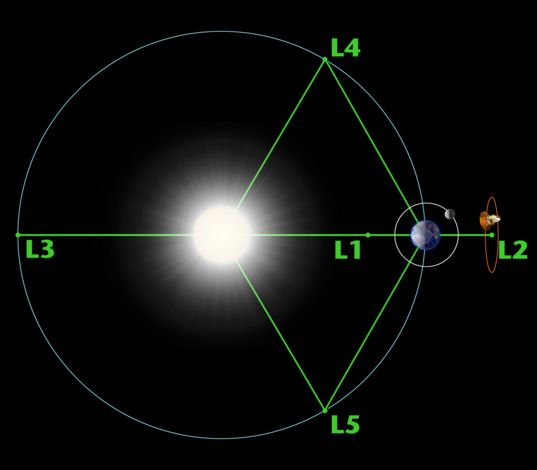 Lagrange Points 1-5 of the Sun-Earth system

Diagram of the Lagrange Points associated with the Sun-Earth system. Lagrange Points are positions in space where the gravitational forces of a two body system like the Sun and the Earth produce enhanced regions of attraction and repulsion. These can be used by spacecraft to reduce fuel consumption needed to remain in position. (Note: Image is not to scale.)

The Lagrange points can offer a measure of stability for an object, whether a spacecraft or a rock or an asteroid. The points do not exhibit any attractive force of their own, like gravitation, so an object located at L1 can easily "fall" away into a more common sort of solar orbit, an elliptical orbit of the Sun that drifts away from the vicinity of Earth. This would be the case for an object such as an asteroid, given that it always experiences at least some slight accelerations, such as the "light-sailing" pressure from solar photons, and the Yarkovsky effect from its own thermal radiation. For this reason, the L1 point is described as an unstable Lagrange point.

As an aside, the L4 and L5 points, which lead and follow the Earth (and other planets) around the Sun, at 60 degrees ahead and 60 degrees behind, seem to exhibit a measure of stability. At L4 and L5, when an object starts to "roll off" the "saddle" of its orbital-dynamics potential, the effect we know as Coriolis can act to return the object back toward the Lagrange point. Thanks to this stabilizing effect, there are natural objects known to inhabit the L4 and L5 points in the solar orbits of Mars, Jupiter, Saturn, Uranus, and Neptune. There are even objects in the L4 and L5 points of the Saturn-centered orbits of two of Saturn's moons! Thanks to the Coriolis effect, these L4 and L5 points can act, to some extent, as though they were little "gravity wells."

But let's join DSCOVR again, which is "orbiting" the Sun-Earth L1 point. The SOHO spacecraft, the ACE spacecraft, and the WIND spacecraft are also operating there; two others have operated there and since departed, ISEE-3 and Genesis. Like the others, DSCOVR had its own momentum left over from its cruise phase, plus it too experiences small amounts of natural acceleration from photon pressure and Yarkovsky. So DSCOVR doesn't just sit still there at L1. Were it left alone, it would "roll" away from the unstable L1 point and soon be orbiting the Sun at its own pace.

The solution is to control DSCOVR so that it drifts slowly back and forth, under active control, as if it were "orbiting" the L1 point with a period of about six months. This is called "station keeping." Of course it's not a true orbit like its orbit about the Sun, since L1 has no real attractive force. DSCOVR's path appears in the shape of a "halo" when viewed from Earth, and so it's called a halo orbit. Mission engineers allow the spacecraft to drift only so far away from L1 before the spacecraft fires its thrusters. At that point it begins another slow drift back to L1, and on past it again, until it's time for another small, propulsive U-turn, again and again. Typically, halo orbits extend a couple hundred thousand kilometers or so either side of L1, and they can also extend above and below the ecliptic somewhat as well.

One effect of DSCOVR's halo-orbit around the L1 point is that it will occasionally have a slight view of Earth's terminator; this can be compared to the way Jupiter's terminator creeps partly into view from telescopes on Earth twice a year, when our planet's solar orbit takes us off the centerline from Sun to Jupiter. 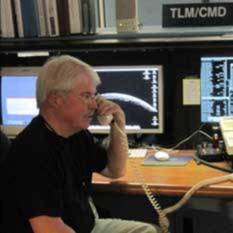 I was unable to find any details on the engine / thruster specifics of DSCOVR via the NASA pages. How much propellant is available for the thrusters to continue adjusting its course to keep it at L1 or what is the expected mission end date?