Of Jupiter's Galilean satellites, Europa has the best imaging coverage. Much of the surface has been imaged at a resolution of 1 to 4 kilometers per pixel. There is also significant coverage at about 200 meters per pixel, plus small areas at higher resolution, in some cases down to 10 to 20 meters per pixel. But there are also large areas that are poorly imaged. Several global maps have been made of Europa but I felt they could be improved so I decided to make a new one. An important factor is also that no spacecraft that can image Europa well enough to make a new map outdated is going to arrive at Jupiter until the late 2020s at the very earliest (but of course I would love to see my new map become completely outdated as soon as possible!).

To make a map of Europa it is necessary to reproject the spacecraft images to a common projection -- I use simple cylindrical projection -- and then seamlessly mosaic them into a big map. I started by making a global full-color map from the available global color coverage. The best resolution of this color data is approximately 1.5 kilometers per pixel, but the resolution is worse in large areas (typically about 7to 15 kilometers per pixel). I then added the higher resolution data (most of it about is 200 meters per pixel but in some cases the resolution is higher or lower) to the color map. Almost all of the high-resolution data is monochrome (grayscale). High-resolution grayscale data can be added to a color image in Photoshop by making an intensity layer, pasting the grayscale data into that layer and then adjusting brightness and contrast in that layer. The result is an image where the topographic details come from the high-resolution grayscale data, and the color is from lower-resolution color data. 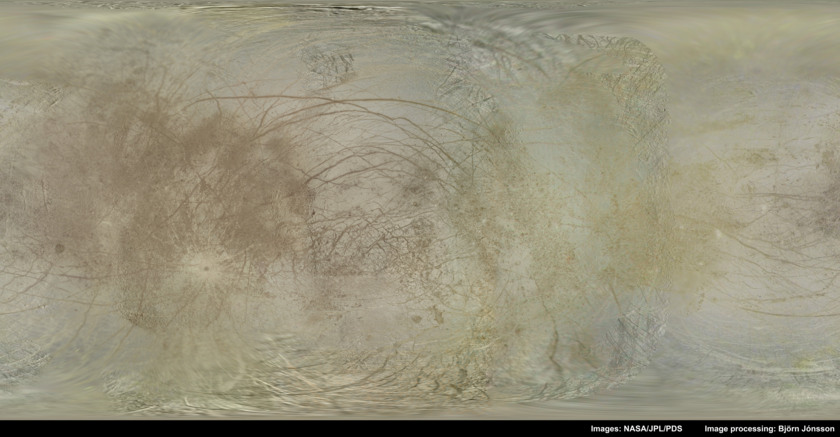 This map of Europa employs 190 images from NASA's Galileo spacecraft and 14 images from NASA's Voyager 2 spacecraft that have been color-matched to produce as seamless a global map as practicable with current data sets. Warning: the fully enlarged version is 20,000 by 10,000 pixels and about 30 Megabytes; some browsers may not display it.

A major complication when making a seamless map from the source images of Europa is that they were obtained at various viewing and illumination geometries. Europa's color and contrast is remarkably variable depending on viewing geometry, even when the illumination geometry doesn't change much. Here is a particularly interesting example:

These images are in simple cylindrical projection. The one with overall lower contrast is from images obtained by NASA's Galileo spacecraft during its G1 orbit while the more contrasty one is from images obtained during Galileo's E14 orbit. These two images were obtained when the illumination geometry was very similar but the viewing geometry was not. Notice the big changes in contrast. Some of the narrow lines appear darker than the surrounding terrain in one image, whereas in the other image they appear slightly brighter. The viewing geometry can be seen below: 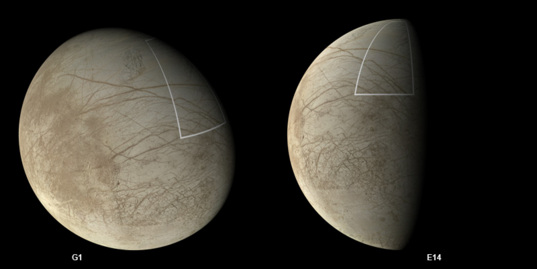 Viewing geometry of the G1 and E14 images

I wanted a roughly seamless map which meant that in lots of cases I had the tweak the brightness, contrast or even color when assembling the map. The result should actually be more realistic this way since, in effect, I'm making a crude simulation of what a Europa map might look like if all of the source data was obtained with uniform illumination geometry. For aesthetic purposes I also added fictional data near the south pole where no useful data is available. The image below shows where I added this fictional data. 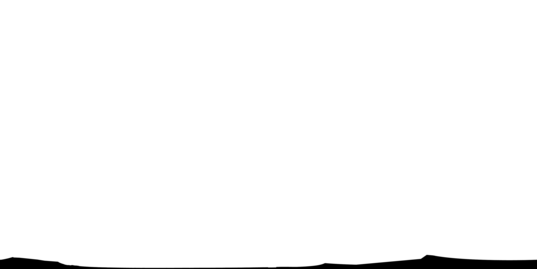 "Mask" showing extent of fictional data near the south pole

In a few cases I also filled narrow, horizontal gaps in the source images by cloning adjacent data, also for aesthetic reasons.

The result from all this work is a new 20000 x 10000 pixel global cylindrical map of Europa based on 190 images from NASA's Galileo spacecraft plus 14 images from NASA's Voyager 2 spacecraft. In addition, I used various images for checking the color of my map even though I didn't use the images directly in the map. The images I used for these color checks include images from NASA/JPL, Ted Stryk and Gordan Ugarkovic. The resolution of the map is about 490 meters per pixel where the source data allows (higher in the longitudinal direction away from the equator).

This new map should overall be better than older maps of Europa, because it employs more source images, it's in color and it's somewhat sharper overall. I used almost all available images down to a resolution of about 200 meters per pixel plus sevaral higher-resolution images. The overall color should be fairly good, with the possible exception of the terrain near longitude 140 degrees west. The color coverage is poor in that area and I had to use Voyager 2 color data (which is of much lower quality than the Galileo data) and tweak it a lot to get seamless color in this area. There is one thing about this map that I know to be inferior to other maps I have seen of Europa: the positional accuracy is a bit worse than in the 0.5-kilometer-per-pixel USGS map.

This map should remain valid and up to date until the European Space Agency's JUICE spacecraft and/or NASA's Europa Clipper spacecraft arrive at Europa. Once that happens I'm hoping it quickly becomes outdated.

This is fascinating! Was this all done in Photoshop, or were there other tools used? I'm always interested in the mechanics of an undertaking such as this. :)