Three weeks ago, we launched a social media campaign to engage the public in space exploration, one of our three organizational initiatives set out in our new Strategic Plan. We wanted to spur conversation highlighting the unique visions each of us has and how we all come together as one powerful voice—The Planetary Society. The reason we are so successful as an organization is because our decisions are informed by you. Together, we have achieved so much, and we are always looking to you to share insight that will help us shape what The Planetary Society does.

As part of the campaign, we asked you three questions: 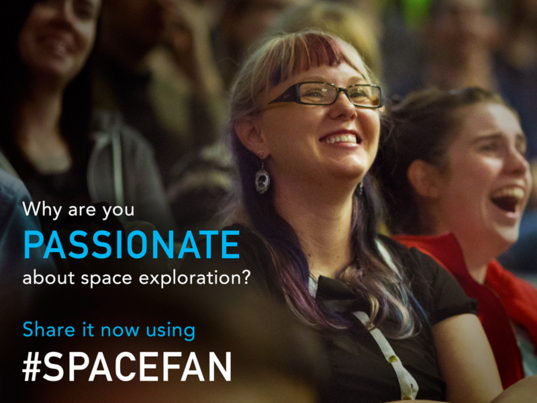 Infinite Visions: Why are you passionate about space exploration?

Your response was extraordinary!

We chose to do this as a social media campaign to reach a broader audience. We have run this campaign in the past with submissions on our website. Purely speaking numbers, in 2012, we had 505 submissions; In 2013, we had 227 submissions. This year, we had 1722 responses on Twitter alone. There were additional responses on Facebook, Google+, Vine, Instagram, and email.

What we achieved was more than we expected—our Infinite Visions campaign reached more than 2.5 million people in 47 countries. How amazing is that? The responses we received ranged from thought-provoking to downright silly, and I enjoyed sharing the responses with my colleagues. It's uplifting to read what people care about and why they are fascinated by space. So many of these responses exemplified our five core values: adventure, optimism, empowerment, action and science. 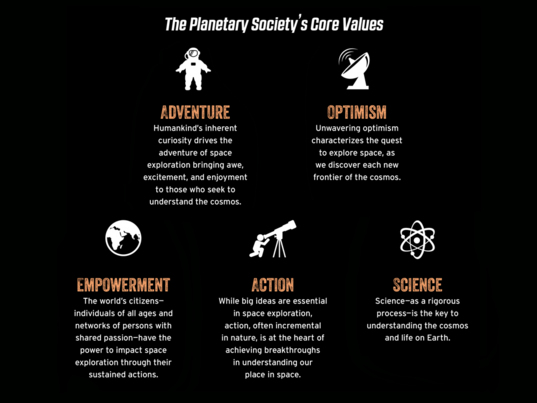 Core Values for The Planetary Society

Take a look at the responses and what’s important to our community. These are the voices of The Planetary Society—individual citizens around the world coming together to advance space science and exploration.

There are so many great responses that I couldn’t possibly include them all here. I encourage you to check the Infinite Visions page or Twitter for more. Let’s keep the conversation going. Feel free to share your vision in the comments below or on social media. We’re all space fans here…some more literally than others:

.@SEGrants @exploreplanets I'm a #SpaceFan because it brings out the best in humanity: curiosity, patience, teamwork, exploration, discovery

@exploreplanets Space exploration is the only thing that unites all humans. Across countries, races, cultures, and languages. #SpaceFan

Let's go to Europa! As much as I love asteroids we have OSIRIS-REx coming up in 2016, and Europa and its oceans are too neglected. #SpaceFan

@exploreplanets I'm passionate because it's our destiny as a part of the universe to explore and experience it all! #SpaceFan

@exploreplanets I'm a #SpaceFan because Dr. Sagan said it best: "Every star may be a sun to someone." How will we know if we don't explore?

I’m a #SpaceFan because I’m in space and have four big blades on top. Oh, wait, wrong kind of fan...

Ok, Karen, you won me over. I like the Infinite Visions campaign way more now than when I first realized it was underway. Although I'm no big fan of social media in general from the consumer perspective, I concede it has an awesome capacity to expand awareness with the public at-large, and I concede it was smart that y'all decided to integrate social media with this campaign to reach an entire younger audience that otherwise might never connect to The Planetary Society or discover all the amazing things happening out there in the areas space exploration. The numbers you cite are, frankly, stunnning. It's a phenomenal achievement and my hat is off to whoever hatched the plan. But I can see your personal efforts to execute the Infinite Visions campaign has probably made the all the difference. Note to Bill Nye: Give some long thought to letting Karen have that raise next year, eh? And maybe also that nice chic corner office with a view....surely she's not still relagated to a punky cubicle in the back of the IT lab...ha ha. Oh, yeah, and thanks for getting the blog post comments section back up !

@CosmosQuest: I'm glad I finally won you over! Although social media is not accepted by all, it is used by many. It's a platform we need to leverage if we are going to reach new audiences and bring broader awareness to space. It's important for us to grow and find that group that will carry us into the future. It takes all kinds, so just as our audience is diverse, our initiatives to reach those audiences will be diverse as well. Thanks for your continued support!

What I want to live to see is a mission sending a craft to Europa and drilling down into the subsurface sea there. If they do so and find any life - even just single-celled, the implications are ENORMOUS!!! If life has started in TWO places in this one miserable little solar system, then there must be life in MANY, MANY places. Surely there must even be a spacefaring alliance we can join, etc. Sorry it took me a while to express this response to her question!