This post originally appeared at Franck Marchis' Blog and is reposted here with his permission.

The International Astronomical Union has chosen the names Aegis and Gorgoneion for the two moons of the asteroid (93) Minerva. My team discovered the small moons in 2009 using the W. M. Keck Telescope and its adaptive optics system. We proposed the names after receiving input from the public. 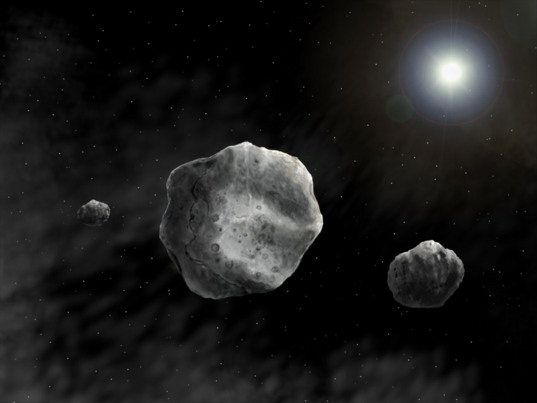 Astronomer J.C. Watson discovered (93) Minerva, a large 150 km diameter asteroid located in the main belt, on Aug. 24, 1867 and named the body after the Roman equivalent of Athena, the Greek goddess of wisdom. On Aug. 16, 2009, astronomers discovered two moons around the asteroids with the temporary names S/2009 (93) 1 and S/2009 (93) 2 from direct imaging with the 10 m Keck II Telescope on Mauna Kea, Hawaii. A follow-up study published this year in Icarus Journal revealed that the moons are small, with an estimated diameter of 2 to 5 km, and orbit at 375 and 625 km from the primary.

The convention for naming asteroidal moons is to pick a child or close relative of the historical figure after whom the asteroid is named. For example, the moons of the triple main-belt asteroid system (87) Sylvia are named Romulus and Remus, founders of Rome and twin sons of the Rhea Sylvia. Minerva was a virgin goddess who did not have descendants, however, which makes it impossible to follow this rule.

That’s why I asked the public for help naming the moons after announcing their discovery and presenting his analysis of the data at meeting of the European Planetary Science Congress and the Division of Planetary Science in Nantes, France in Oct. 2011.

The decision to crowd-source the names caught the attention of the public, so whenever I had the opportunity I repeated the request when giving presentations to groups of amateur astronomers and in interviews to astronomy magazines. Over the following year, I received a lot of emails with suggestions. Interestingly, several of them used mythological attributes of the goddess Minerva as potential names for the moons.

Several space aficionados proposed naming the moons after magical weapons used by goddess. Athena was the favorite daughter of Zeus, and that’s why he let her use his insignia, his terrible shield, the aegis, and his devastating weapon, the ray. Gorgoneion was a special apotropaic amulet showing the Gorgon head, and was used as a protective pendant. The Aegis was the shield worn by Athena, bore Medusa’s head, and could paralyze any enemy who looked at it.

We submitted a formal proposal with the names Aegis and Gorgoneion to the International Astronomical Union, which is in charge of naming comets, asteroids and their moons. In Dec. 2013, the names were officially accepted by the organization and published in the Minor Planet Center MPC batch. “S/(93) 1 Aegis” the outer, larger 4 km moonlet, was the first one spotted by the observers. “S/(93) 2 Gorgoneion” orbits closer to the primary and may be smaller (3 km). The pendant is normally smaller than the shield, and held closer—a tool for remembering which moon is Gorgoneion.

It is a great privilege for astronomers to name celestial bodies such as the moons of an asteroid. We wanted to share this privilege with members of the public, who as taxpayers fund our research and consequently play an essential role in it. Plus, it is reassuring to find out through emails sent by people around the world that astronomy gets a lot of attention.

Thanks for my colleagues and co-discoverers Pascal Descamps, Jerome Berthier and Frederic Vachier from IMCCE-Obs de Paris.

Additional references if you want to know more:

The encyclopedia of Goddess Athena: http://www.goddess-athena.org/Encyclopedia/Athena/