Bright and early this morning, we NASA Social folks met at the Kennedy Space Center Visitors Complex for a tour of the space shuttle Atlantis. This is the first shuttle I've seen in person, and it was a stunning sight to see. We were greeted at Atlantis by former astronaut Wendy Lawrence. 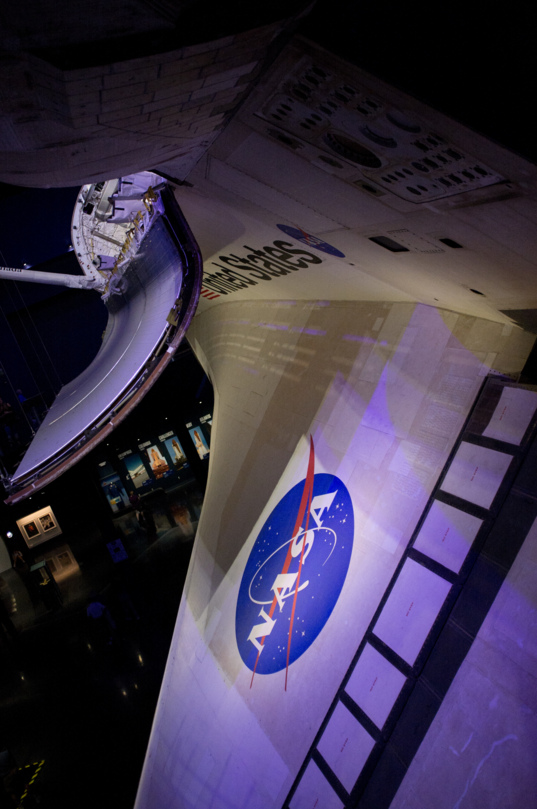 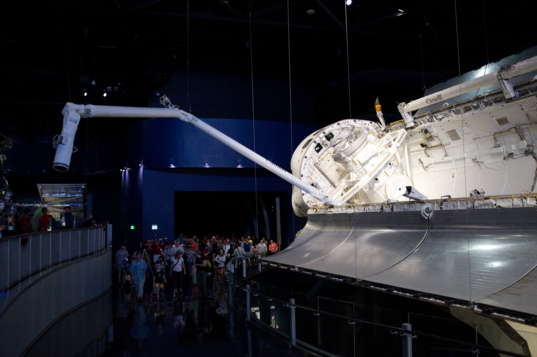 Space Shuttle Atlantis (and the Canadarm)

I then had to dash down to Cocoa Beach to grab my badge for The Planetary Society events later in the day, so I split from the NASA Social group for a bit. In the afternoon, we reconvened for Bill Nye's speech in the Kennedy Space Center Rocket Garden.

Bill's speech focused primarily on sundials. In World War II, his father was a prisoner in a Japanese prison camp for 4 years. During this ordeal he measured time by creating sundials. This experience spawned a fascination (or in Bill's terms, SOD—"Sundial Obsessive Disorder") with sundials in both Bill's father and in Bill himself. Many years later while Bill was touring his alma mater, Cornell University, he saw the photometric calibration target for Pathfinder. The goal of the target was to make sure that the colors in the images were properly calibrated to avoid the issue encountered with early Viking images. These images had been processed such that the skies were blue but, as you all probably know now, the skies on Mars are more pinkish. Bill suggested turning the calibration target into a sundial to make it dual-purpose: color calibration and keeping time. He coined a few terms for the color tones visible in shadows under different lighting conditions. If you look at the shadows on a white piece of paper outside on Earth, you'll see they have a bluish tinge to them. He called this "cerulescence." The lighting used in the Pathfinder calibration target tests to simulate Mars conditions had a yellowish tone, which Bill referred to as "xanthodescence." When the target was actually used on Mars though, the shadows had more of an orange tinge to them: "orangidescence." Pronounce the "orange" part like it's French. He used this opportunity to promote The Planetary Society's EarthDial project. 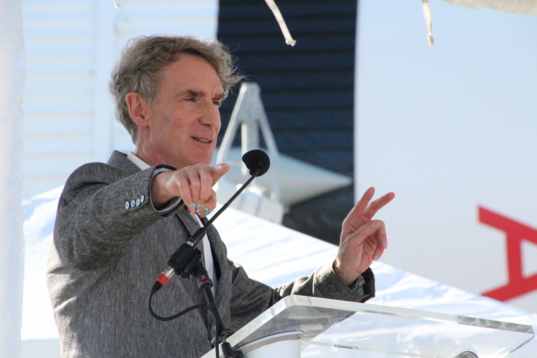 Bill talked about the threat of asteroid impacts and attempts to combat them, such as the Laser Bees project (he also touched on the LightSail project, which even my planetary scientist friends were not aware of and thought was cool). He noted that single planet species don't survive, and that exploration is vital. Species that didn't evolve, expand, and explore became food for other species. The fact that humans did this led to our survival.

Immediately after his talk a group of us rushed over to buses to go on a tour of the Vehicle Assembly Building (VAB) and the MAVEN launch pad with Bill. Allow me this moment to say how surreal that experience was: Standing closer to the spacecraft on the pad than most people (outside of the engineers) will ever get the chance, with Bill Nye! As we all gathered at the launch pad, I asked Bill if I could take his photo by MAVEN. 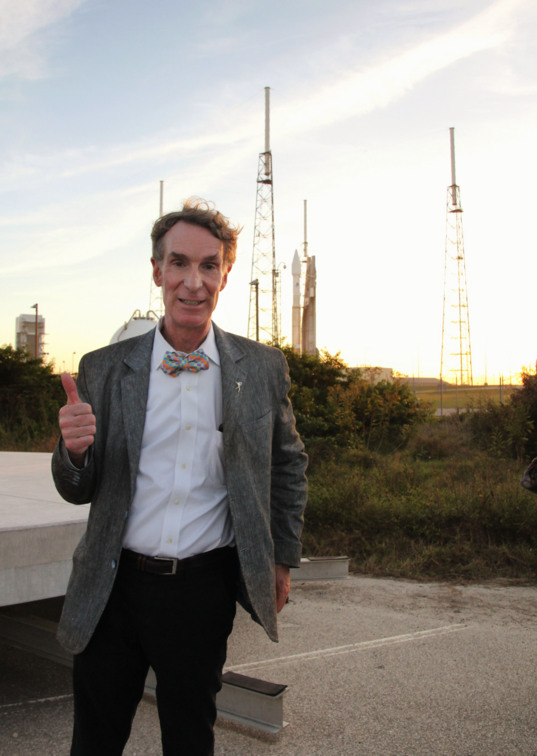 He asked if I wanted a photo with him for the blog too. Insert huge smiling face here. 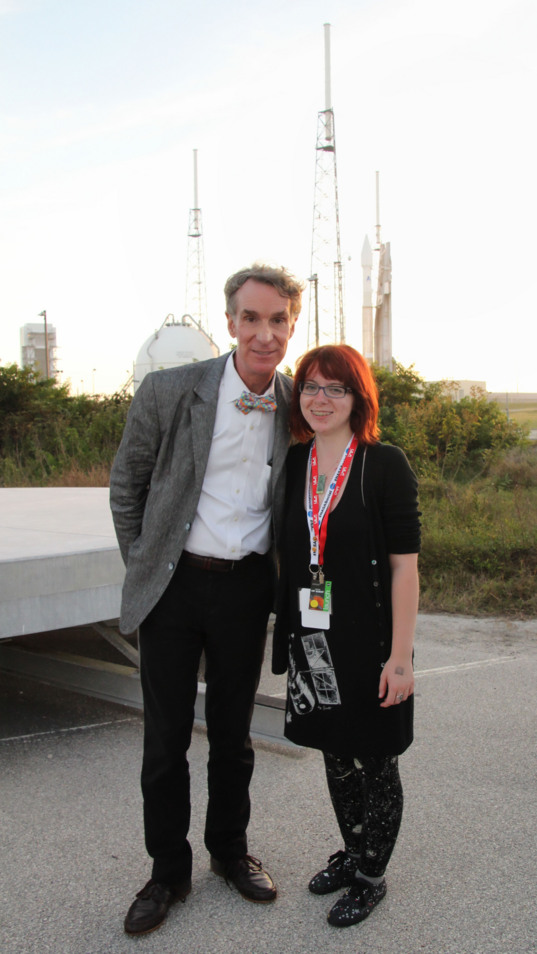 With Bill Nye at the MAVEN launch pad

My lab group from the Centre for Planetary Science and Exploration (CPSX) at the University of Western Ontario have a tradition of doing "jump shots" when we're in the field, so we decided to carry on this tradition at the launch pad. This was much to the entertainment of the folks around us. 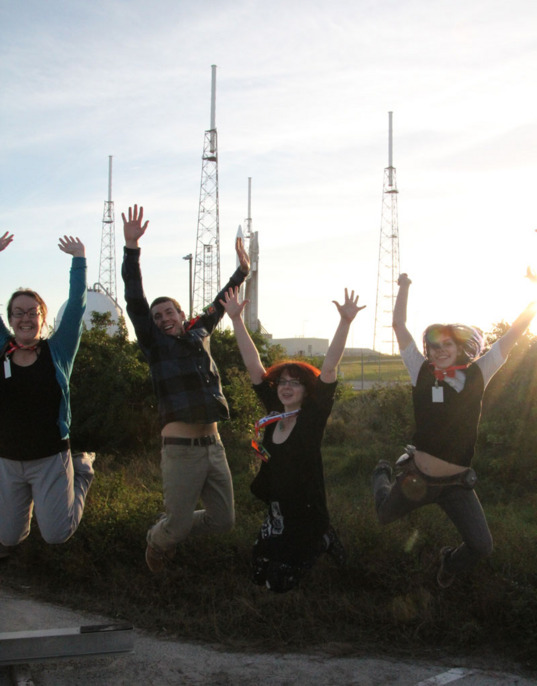 We watched the sun set over the pad before heading out for the day. Again, incredibly surreal. Conditions at the time of writing are 60% chance of a go for launch on the 18th. Keeping my fingers crossed! 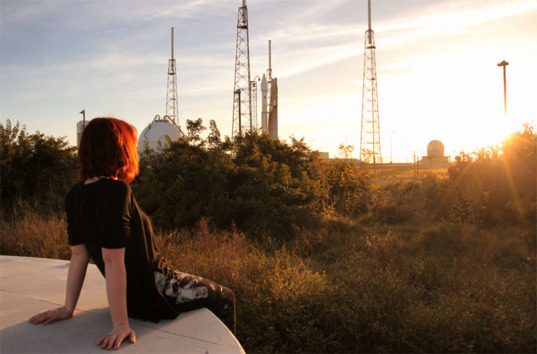 Sunset over the MAVEN launch pad

Great commentary from the visitors side. And thank you to CPSX and all our Canadian friends and volunteers.