The second site that we discussed yesterday was Holden Crater. Ross Irwin gave the first, overview presentation. Holden is a 155 kilometer crater that formed right in the middle of a huge drainage system that spans from the Argyre basin to the northern plains, and at Holden you would land on a bunch of coalescing alluvial fans on the western crater floor and then drive southeast to access some nice phyllosilicate-bearing light-toned layers. Irwin emphasized that even though the light-toned layers are a key target, Holden is all about visiting a bunch of diverse water-related settings. He also made the interesting argument that MSL is likely our only chance, at least within the next decade or two, of sending a plutonium-powered rover to Mars that is capable of landing at a site as far south as Holden and Eberswalde, whereas Gale or Mawrth could be accessed by a later, solar-powered rover. Irwin also gave extremely detailed lists of what science MSL could do at each stop along the traverse. These sorts of lists are exactly what we need to make for all the sites because they really get us thinking in detail about MSL's capabilities and what we would learn. 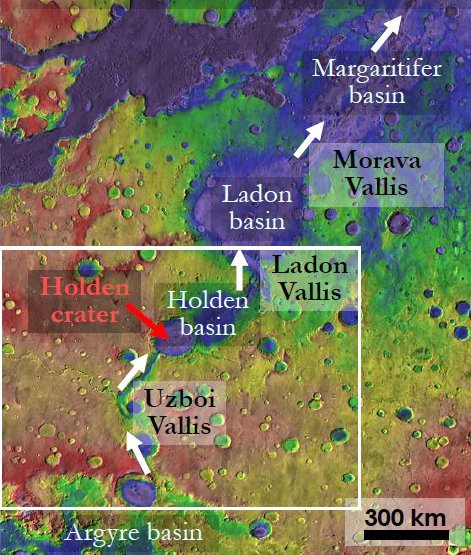 Next up was Kelin Whipple, who is an expert on alluvial fans here on Earth. Kelin described in more detail what fans can tell you about the climate when they were deposited (a lot!) and showed that the fans at Holden could be made by mud flows or water flows and that either way they would be really interesting.

After that, James Wray, a fellow Cornell grad student and Goddard '06 NASA Academy alum, gave a presentation about the mineralogy at Holden. He particularly looked at some of the rocks in the walls of the crater, which would be present in the materials of the fans in the landing site. James found a pretty diverse set of minerals, including two types of olivine, two types of pyroxene, some phyllosilicates and some possible salts or high-silica minerals. James also pointed out that there are some mounds of material in the eastern ellipse which may be outcrops of pre-impact material. 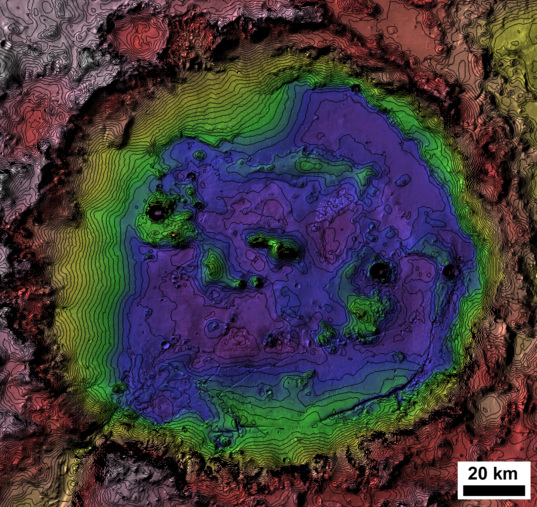 A topo map of Holden crater

MSL would land on the gently sloping alluvial fans in the western portion of the crater and the drive southeast to study light-toned layers, deposits from the flood that breached the crater rim, and ancient bedrock.

Following James' presentation, Debra Buczkowski discussed the results of work with Kim Seelos studying what looks like a really extensive layer of phyllosilicate-bearing rock just below the surface in the region to the northwest of Holden and Eberswalde. They found that the clays in Holden that appeared to be in-place were different from those in this extensive layer, but that some of the Holden clays that looked like they had been transported might be the same stuff.

Finally Peter Buhler gave a presentation of his work on a small trough to the southeast of Holden which may also have been a system of lakes, and emphasized that Holden and Eberswalde could give us a "contextualized" hydrology of the broader region.

The discussion started off with a question from Dawn Sumner about whether the alluvial fans on the wall are interbedded with the light-toned layers, or whether the fans are just on top of the light toned stuff. This is a tough question to answer because as alluvial fans form, they advance outward into the basin, hiding everything underneath. Next my adviser, Jim Bell, asked whether all the great science described for the Holden fans could also be done on the fan at Gale Crater, to which Kelin Whipple said "Yes!" although he pointed out that it's hard to tie the fans to the stratigraphy of the mound at Gale. Another question about Holden was what the compositional variation of the fan material would be: in other words, how far would we have to drive to get samples of different stuff? The short answer was: we don't know until we get there. But James showed that there was a variety of rock types up in the crater wall. Whipple explained that if the fan was made by mud flows, which tend to come from a very localized source, they each layer in the fan would be different, whereas if it was formed by a more watery runoff flow then it would have a more blended composition.

After hearing the presentations for Holden I felt a lot better about it as a site than I had before, but I still have the nagging thought that it's very similar to Gale: you land on alluvial fans, then traverse to visit nice layered stratigraphy, except at Gale the stratigraphy is much more diverse and much thicker than at Holden. If I had to guess, based on the vibe in the room, I would guess that Holden and Gale are the bottom two sites in the ranking. Part of that may have been the timing of the presentations for Holden (after lunch lull) so I'll see how it looks after the more detailed discussion today. As for my own personal ranking of the sites, it has been jumping all over the place as I hear the presentations from each group. I'm very interested to hear what the engineers tell us today, and to see how the giant discussion this afternoon plays out.