Hello everyone, I’m back from the MarsSed 2010 meeting in El Paso! The meeting was great: it was small and focused on sedimentology and stratigraphy on Mars, with lots of room for discussion. Even better, there were plenty of terrestrial geologists attending, and their comments were extremely helpful for me, and probably many other Martians who lack a geology background.

After two and a half days of presentations and discussion (and a lot of learning on my part), we headed off on our field trip to the Guadalupe Mountains!

We started off in a salt flat graben with a lovely view of the Guadalupe mountains. What’s a graben, you say? It is a low-lying block of land, bordered by parallel faults. If you have heard of the “basin and range” region of the southwestern US, then the basins are graben. The mountain ranges are also called “horsts”.

A nice diagram of horsts and graben

This is how the "basin and range" area of the southwest formed.

The graben that we stopped in was a salt flat, where gypsum and halite are left behind when water collects in the lowlands and then dries out. 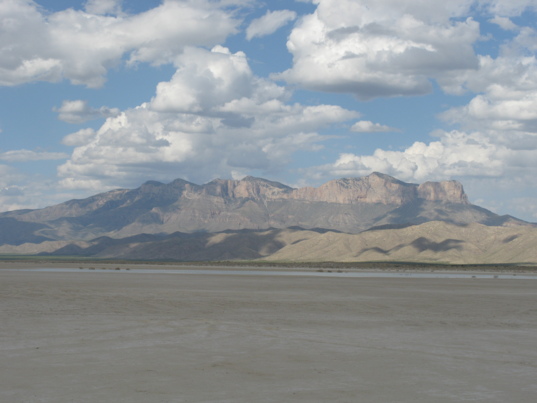 A view of the Guadalupe Mountains from the salt flat

From our vantage point, we studied the nicely exposed mountains and compared them to a detailed cross-section of the area. The rocks of the mountains were once a large carbonate reef on a continental shelf. When sea level was high, thick carbonate beds were deposited on the slope of the continental shelf, and when sea level fell, sand and silt from the continent  were transported across the reef and deposited in the floor of the ocean basin. Here is a nice illustration that we found at one of the national park exhibits on the last day that really helped clear things up for me. 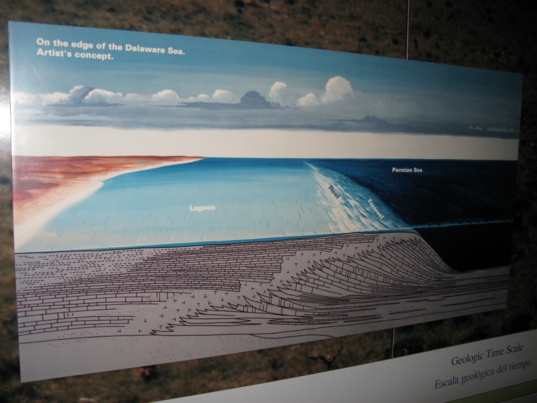 A diagram showing the relationship between the geographic setting and the underlying stratigraphy of the shelf and reef. 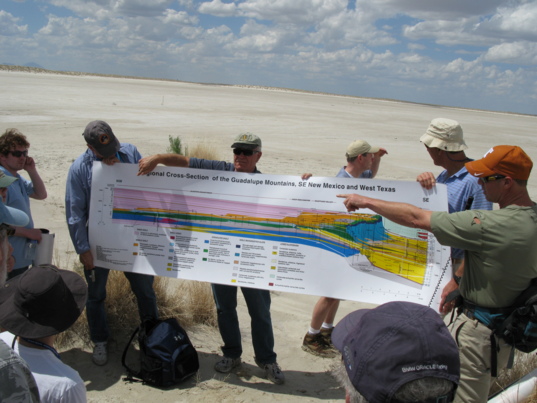 Looking at the Guadalupe mountains

Here we are on the salt flat taking our first look at the stratigraphic cross section of the Guadalupe mountains. The mountains are off to the right, outside the field of view of this picture.

You may wonder what the relevance of ancient ocean reefs are for a bunch of Mars scientists. Fair enough. Nobody claims that we would find a big carbonate reef on Mars. Believe me, scientists have been searching for carbonates on Mars for decades. Recently, some small amounts have been detected, but nothing comparable to a huge reef. We were instead studying the reef as an example of a well-understood stratigraphy on Earth, and trying to learn how that stratigraphy was deduced. One of the main lessons was that not everything starts as a flat-lying layer! In fact, the edge of the reef appears to form a nearly horizontal layer, but it is actually made up of multiple sequences building outward into the basin. It just seems to form a layer because the reef always forms at the edge of the continental shelf. You can sort of see this “fake” layer in the pictures above. It is dark blue in the colorful cross section and is the light-toned band in cross section in the artist’s impression.

After discussing the cross section in some detail, and particularly admiring the large, inclined beds of the reef that were exposed in the mountains, we moved on to take a look at the deposits that filled the ancient Delaware basin when the sea began to dry out. The deposits have a very striking light and dark banding: 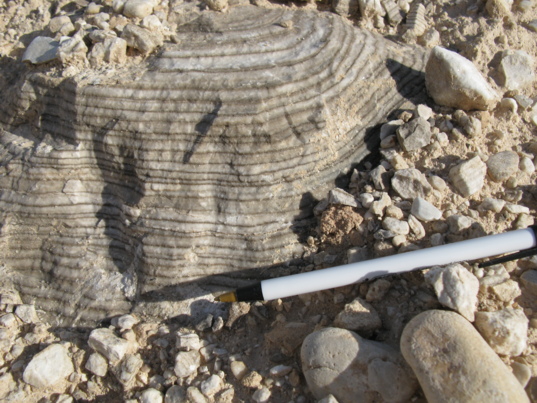 The light layers are gypsum and the dark layers are carbonate. The current theory is that each couplet represents one annual cycle: gypsum was deposited in the summer when evaporation was rapid, and carbonates were deposited in the winter. Apparently some poor graduate student counted all 260,000 couplets, which implies that it took about that many years to fill the basin with evaporites.

The relevance to Mars in this case is a lot more clear. There is evidence that many large craters were once filled with water. Now they are bone-dry, so presumably big evaporite deposits should be common on Mars! There are nice big stacks of hydrated sulfates at the bottom of Valles Marineris which might be remnants of such a deposit that precipitated out of a body of water in the canyon.

Stay tuned for Days 2 and 3 of the field trip! If you’re really interested, I suggest that you check out the awesome field guide that was made especially for our trip.