The Mawrth Vallis landing site is actually a set of four possible landing ellipses in an area with huge clay mineral signatures that is cut by a meandering outflow channel. There was some grumbling in the past about the fact that Mawrth advocates proposed four ellipses when everyone else followed the rules and only submitted one, but in the end I think it hurt them. They ran way over time today and had to speed through several very good presentations. 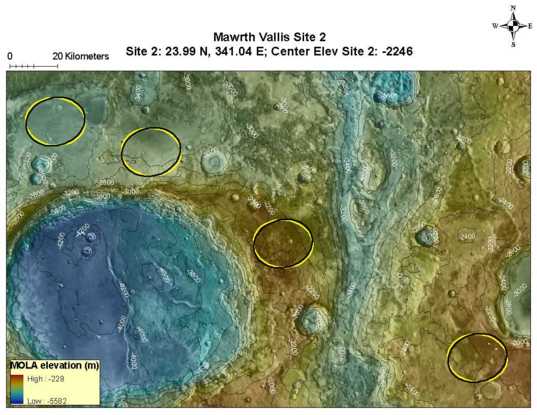 Part of the reason they went over time is because their first presentation spent a long time trying to convince people that the mission must go to a location from early in Mars history. We already knew that! They also had a lot of overlap between the individual presentations. But anyway, on with the science.

Mawrth is a bonanza of clay minerals. We saw modeling evidence which indicates that in some places >60% of the minerals in the rocks have water in them. I don't know how much I trust the models, and I am suspicious of such large numbers, but at any rate, if there are thick beds of clays anywhere on Mars, Mawrth is a great candidate for that. The great thing about Mawrth is that not only is there a very strong phyllosilicate detection, but there are both Aluminum and Iron/Magnesium bearing clays, and they have a definite stratigraphic relationship. Throughout the area, and even in locations hundreds of kilometers away, the same layers are seen: a bottom layer of iron/magnesium clays, a top layer of aluminum clays and hydrated silicates, and a capping layer of something else. In between the two clay layers there may be another layer that represents a chemical reaction between them.

There is also a lot of interesting morphology in the area, including polygons that seem to correlate with clays, fractures in the bedrock that have light or dark "halos" around them that may indicate fluid flow, deformed layers of sediment, and filled craters. Also, some of the layers appear to follow the topography so that maybe they were draped over it. This would be possible if they were some sort of ash fall from a huge eruption, or some other sedimentary unit that was draped over and then altered in place.

As I mentioned briefly above, the same layering sequence is seen in areas many hundreds of kilometers away from Mawrth Vallis, meaning that if we figured out Mawrth, we could figure out a big area of Mars. One of the confusing things about Mawrth is that there is no clear basin that would collect sediment, so the question arises: how do we know that these are huge stacks of ash or dust or sand or something blown by the wind? This was discussed at great length, but the bottom line that I took away was that, yes, it could all be air-blown. John Grotzinger, the project scientist, pointed out that on Earth, we learn a lot from stuff that has been transported and that to him it's still an interesting site whether the clays were transported or formed in place.

Some people expressed the thought that, after being bombarded by a series of presentations about the site, they couldn't see how a story would come out of it. The response to this was that, yes it is complicated, but it is not a complete mess with no coherent relationship. There are a lot of observables at the site with MSL, and I found this complaint kind of odd for this site. The group presenting showed us lots of hypotheses even if they didn't call them that, and I don't think it would be incomprehensible from the ground with the rover.

One of the final points raised was that, if the layers appear to drape current topography, how do we know they aren't much younger than they seem. The answer given to this was extremely unsatisfying to me. Basically they said that one current theory (which happens to be the favorite one of the proposers of this site, since they came up with it) says that phyllosilicates formed early in Mars history, and therefor this site with phyllosilicates must be from that period. That wasn't how they said it, but that's what it amounted to, and that's dangerous thinking.

Mawrth is definitely a fascinating site that could tell us a lot about Mars, and it has the best evidence for clay minerals seen on the planet. But life can be well preserved without clays and clays don't always preserve life. A lot of people at this workshop are equating clays with biomarker preservation but it is not that simple. I think the presenters shot themselves in their collective feet by not being organized, not following the same pattern that the other presentations did and running way over time. I like Mawrth, but I came away feeling like there is a lot that we don't know regarding its habitability and potential to preserve organics, so I don't know if it will be carried.