This morning we hit the ground running and heard about a very interesting site: the Nili Fossae Trough. This site would land in a big canyon formed when a block of crust dropped down. To the southeast of the site is the giant Isidis impact basin, and to the south is the Syrtis Major volcano and associated lava flows. Just east of the trough is a somewhat fresher crater whose ejecta fills the area of the landing site, and many of the crater and canyon walls have sapping channels or river channels in them that give evidence of some periods of wetness for a large portion of Mars' history. 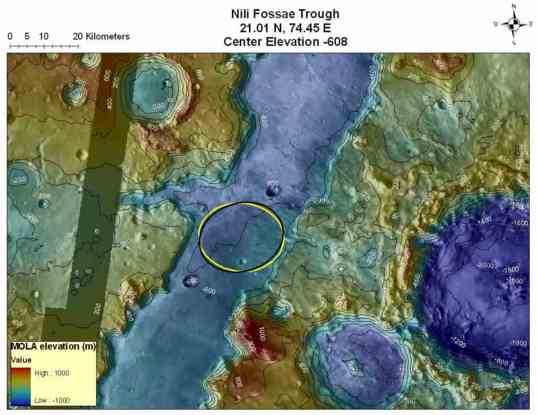 The mineralogy of the region is spectacular. Within a few hundred kilometers of the site there are volcanic minerals like olivine and pyroxene, many types of clay, and possibly even evidence of carbonates! (carbonates have been a sort of holy grail in Mars science because they could be where all of the carbon in the early thick atmosphere ended up, but nobody has ever seen them in any significant amount from orbit) Carbonates dissolve in acidic waters, so their presence indicates a neutral to high pH in the region, which is generally more friendly to life. MSL would be able to access huge blocks of rock blasted out of the nearby impacts, and also drive to interesting bedrock nearby.

It was argued that Nili Fossae is a good site for habitability because it has a lot of different possible locations and is not dependent upon the microbes being photosynthetic. The potential environments include hydrothermal fractures, sedimentary units, and other subsurface niches. Underground habitats are nice because they are shielded from radiation and are more likely to be wet due to groundwater.

The nominal mission would begin by landing on ejecta from the nearby crater, and then would drive across lavas from Syrtis Major, onto clay-bearing stuff filling the canyon, and then over to the eroding canyon walls which have a very strong clay signature.

The site is absolutely spectacular in terms of the geology and mineralogy, and if we landed we would get the added bonus of awesome scenery. Unfortunately, it has a tough time making the habitability and preservation case. In the discussion after all of the Nili Fossae talks, many people were critical of the idea that a) the area had hydrothermal activity and b) that MSL could detect evidence of organics in such environments. The argument about this point got very heated, but I think was valuable. One thing that was pointed out that I hadn't thought about before was that, in a planet with no photosynthesis but lakes on the surface, you would still have life in the lakes because there would be chemical gradients. On earth the only reason that non-photosynthetic life is not up near the surface is because the more efficient photosynthesizers can out-compete it.

There were also concerns about just how long water was present at the site. The presenters kept saying "sustained" wetness, but when pressed on it, they actually said that there were several episodes and I got the impression that they weren't really sure how long those periods lasted.

The discussion would have gone on a lot longer, but in the interest of staying on time, we moved on. I think Nili Fossae is a really cool site, with great geology but their habitability case is not as strong. It has the advantage that it looks like the clays are "in place" and have not been eroded and transported from elsewhere. It would also be a really dramatic site with cliffs and mesas unlike anything we've ever seen at other sites.

We'll see if it lasts through this process. If it does, we could be in for some very scenic views from mars, and some fascinating science to boot.

For more thoughts about the Nili Fossae site and the hard questions that were asked, check out Emily's post over at the Planetary Society blog!