I'm in the airport on my way to California to participate in the third Mars Science Laboratory Landing Site Workshop, so I thought I would take this chance to post my blog entry from day three of last year's workshop: 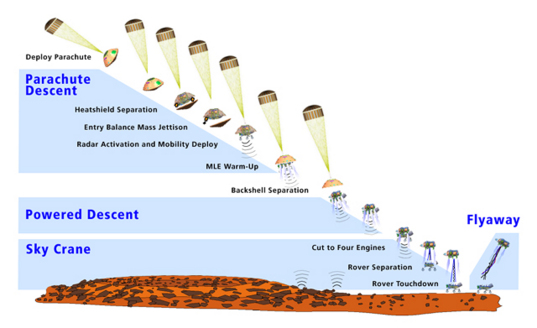 We began with a series of highly anticipated presentations about potential landing sites with evidence for salts, sulfates and clays—all types of minerals typically formed in water-rich environments that are favorable in terms of habitability.

The first presentation was on some new, unusual sites with strange, featureless spectra. Normally a featureless spectrum is nothing to base a landing site on, but some subtleties in the slope of the spectrum implied that it may be due to chlorides (such as sodium chloride—salt). When combined with the fact that many of these potential chloride sites appear at the bottom of basins, and that salt is excellent at preserving biological signatures within microscopic fluid inclusions in the crystals, and these new sites got quite a lot of attention.

Next came two presentations on a region called Mawrth Vallis. This region is carved by a huge channel, with lots of light-toned layers, and shows very strong evidence for clay minerals in those layers. Some of the potential landing sites were directly on the strongest clay signals, but looked like very rough and nasty places to land. Another potential site aimed for a much safer but less-interesting location—it would require some driving to get to the high-clay areas, but not too much.

Finally we heard a very compelling case for landing in a trough in Nili Fossae. This is another location with extremely strong evidence for clays, and they appear to be eroding from the walls of the canyon, implying that the rover would be able to investigate the clays where they formed and not just clay sediment that has been washed to the site from somewhere else. If that's not enough, there is also ejecta from a nearby crater that contains clay minerals. Also, right in the landing ellipse there is a contact between the two earliest eras of martian history, so the rover could study what happened to cause the change. And wait, it gets better! The landscape just outside the landing ellipse is steep canyon ways and eroded mesas _ they were compared to Monument Valley. Translation: if we landed here, we would finally see something other than barren, rock-strewn plains with occasional craters!

With that, the presentations of potential sites were finished, and we began the painful process of trimming down the list. Throughout the three days of presentations, we assigned the sites values of red, yellow, and green in four scientific categories. Compiling those results, about 11 sites seemed to stand out above the rest. These included a wide variety: ancient river deltas, craters with layered rocks, potential hot springs, the safe (but interesting) Meridiani plains, and of course, the sites with strong mineral evidence for past habitability.

Once the discussion period began, the meeting became (if possible) even more interesting, but also very chaotic. Sites with high "scientific risk" were gradually removed from the list: we don't want to land somewhere without several lines of evidence that the site would answer our questions about the past habitability of mars. This placed the chloride sites and the potential hot springs sites in "purgatory". They may be investigated in case the highest choices are all eliminated, but they are not finalists. Northern Meridiani, a site very similar to where the Opportunity rover is right now was eliminated entirely. It was a good site for geology and was "flat as a parking lot" (and therefore safe), but it would be a lot more of the same science that we are seeing from Opportunity, and would not address the past habitability of mars.

Melas Chasma, a site that was universally agreed to be fascinating, was eliminated because there was no way it could satisfy the engineering constraints. It required placing the ellipse in a small flat area on the edge of Valles Marineris, and with the new ellipse size (25 or 30 km diameter, rather than the original 20 km) there was no way to land safely.

We also heard some bad news from the engineers who model the winds on Mars. It turns out that the Nili Fossae trough, and two other high-ranked sites nearby, are in places with very high wind shear, which makes landing safely difficult. After some discussion, we put it to a vote, and decided that the science in Nili Fossae was just too compelling: "Damn the winds, full speed ahead!"

The final, longest discussion involved the interplay of a number of engineering and science factors. I will try to sum them up here: First, in choosing a landing site, we are restricted to latitude bands: if we choose a site in the south as the primary site, we have to choose a backup "safe" site that is also roughly in the south. Unfortunately, although the sites in the southern hemisphere are at low elevation (which helps when landing), most of them were not good "safe haven" candidates. Another problem was that they are all in the south, and it would be winter when the rover landed. Due to some trouble with the actuators, it is likely that the robotic arm and maybe even the wheels and camera mast, would be unable to move until spring or summer—so to land in the south might mean sitting dormant on the surface until it warms up, and even then only operating for half the year and going dormant for the other half. This sounds pretty bad, but the southern sites also happen to be the ones that show preserved river deltas and other extremely good evidence of long-standing water. The question was, are we willing to sacrifice operational time for the possibility of studying a location where we have excellent mineralogical and morphological evidence for standing water?

After a very long and painful discussion, in which at one point we were one vote away from eliminating the southern sites, we got two new pieces of information. The engineers and mission managers actually suggested that we keep some southern sites—if we don't try, we don't know how well we can make the rover work at such cold temperatures. They also told us that it is possible (though difficult) to choose a primary site in the south, and a safe-haven in the north (or vice-versa). With this information, we voted overwhelmingly to keep the southern sites on the table, with the understanding that if they were totally impossible, we still have some northern sites, as well as some sites in purgatory if all else fails.

Finally, we had to decide which northern sites to cull. After hearing the pros and cons of each site, we voted and decided to eliminate the Eastern Meridiani landing site—the only "safe" site that was left on the list. We ended up with the following list, for which I will try to give brief pros and cons:

Nili Fossae—Pro: loads of clays eroding from the walls, monument valley, geologic contact between two eras; Con: Dangerous winds, most of the interesting stuff outside of the landing ellipse

Mawrth Vallis—Pro: Loads of clays, layered deposits, huge water-carved channel; Con: rugged terrain, or would land and have to drive to clays

"Runcorn" Crater (SW of Meridiani)—Pro: clays, possible chlorides, ancient riverbeds in the ellipse; Con: rock abundance and slopes may be unsafe, is the "ancient riverbed" actually and ancient lava tube?

Edit: I originally had said that NE Syrtis Major made the cut, but that's not true...the debate toward the end was interesting enough that my notes got sketchy. Oops!