New Horizons science team member John Spencer just sent me another entry on the preparations for the approaching launch of New Horizons to Pluto. --ESL

We're at the Cape! More properly, we're at Cocoa Beach just down the coast, having flown in from Denver today. We all have return tickets to wherever we came from, but for some part of us, this is not a final destination, merely a transfer stop. Our hopes and spirits continue on from here, to Pluto and beyond. The spacecraft has passed its launch readiness review, the weather forecast looks favorable for Tuesday, and no obvious barrier stands between us and the Kuiper Belt. 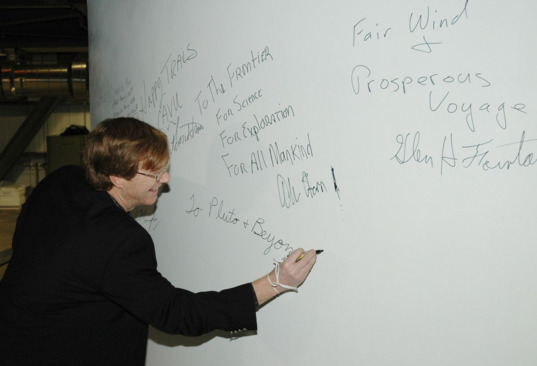 Hal Weaver signs the fairing on the New Horizons rocket

Hal Weaver, project scientist for New Horizons, looks pretty happy as he signs the outside of the protective fairing enclosing the New Horizons spacecraft on January 11, 2006.

I can't actually believe any of this. All my life, Pluto has been inaccessible. Yes, we've been working on this mission for more than a decade. But we work on so many mission proposals that come to naught. It's hard to grasp that this one, to the most outrageously faraway destination of all, has become something real, and is sitting at a launch pad a few miles from here. I guess it will all seem real enough very soon.

That's all for tonight, except for a quick update for the thousands of you who anxiously await news of 1998 SM165, that Kuiper belt object that I was watching at Lowell Observatory just after Christmas. I mentioned that I was having trouble making sense of the data, but the more I've worked on the images the more I believe what I'm seeing. What I seem to be seeing is that this KBO is rotating at a speed about 5% different than its published rotation rate. Maybe the gravitational influence of its moon could have temporarily altered its rotation period, but four out of four dynamicists that I've consulted think this is highly unlikely. More likely there's still something wrong with my analysis, or with the analysis that led to the original rotation period estimate. Once we complete our little bit of business here in Florida, I'll get back to the problem.