In Honor of JUICE, a New View of Europa

On May 2, 2012, the European Space Agency (ESA) approved the Jupiter Icy Moon Explorer (JUICE) mission, which will conduct flybys of Jupiter's moons Callisto, Ganymede, and Europa before settling into orbit around Ganymede. The mission is slated to arrive in 2030. It is not known yet whether NASA will choose to participate or (hopefully) send its own mission to conduct a detailed study of Europa. The exciting thing is that even if NASA does drop the ball on outer planets exploration, it appears that ESA will take up the mantle.

To celebrate the selection of ESA's new mission to Jupiter and its icy moons, I have reprocessed another Galileo view of Europa. The dataset I processed was obtained by the Galileo spacecraft on September 25, 1998, during its 17th orbit of Jupiter. I processed it by reducing compressing artifacts and noise and bringing out detail. I removed noise by hand instead of using an automated denoising algorithm. There was a lot of noise in the image, but no automated removal method did a good job of removing it without wreaking havoc on the little ridges. I borrowed color data from other data sets. This image shows areas of Europa not visible in the global views I have processed in the past, though there is some overlap along the terminator (day-night boundary) with other images. 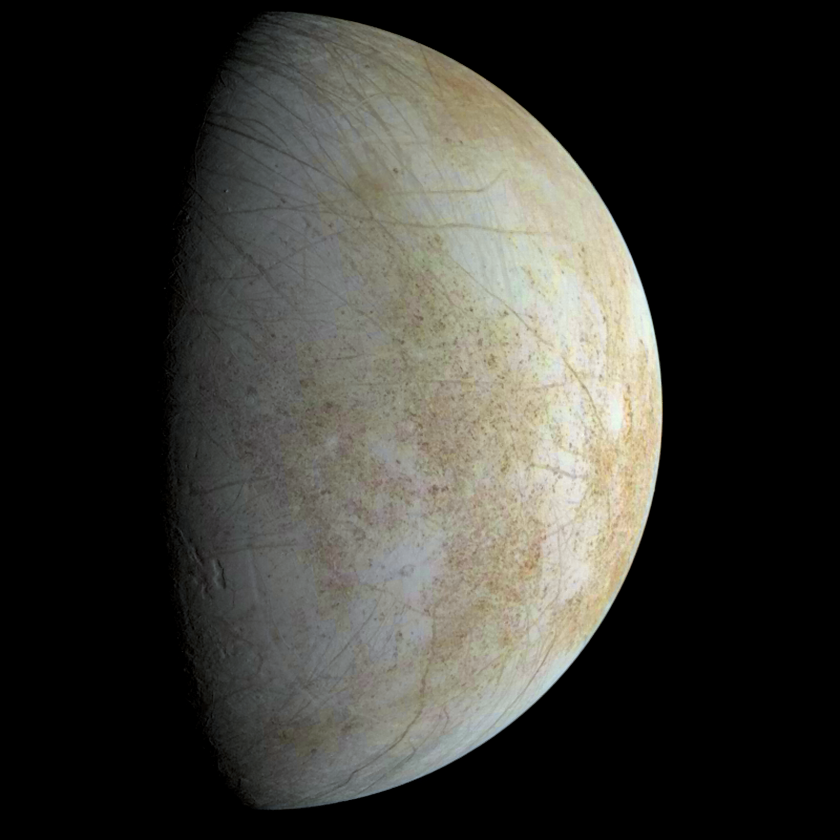 Color half-phase global view of Europa. The detail image was taken by Galileo on September 25, 1998. Color is from data taken on other orbits.

The lines that look like scratches? What accounts for these (do you think)

Magnificent image! It really brings out some of Europa's subtle elevation features.