The tiny world 2014 MU69 is far behind New Horizons now and no longer visible to its cameras. Now, New Horizons’ task is to return its precious data to Earth. The process will take 20 months, but the best images should all arrive between now and the end of February. Some early ones have come down from the spacecraft in the hours since the flyby. These are not the best we will get, but they already show us much about MU69: this is probably what comets look like, before they become comets.

Note: This post has now been updated to include images released on 3 January. No further images will come to Earth from New Horizons until January 10 because the spacecraft is behind the Sun, making radio communication error-prone. 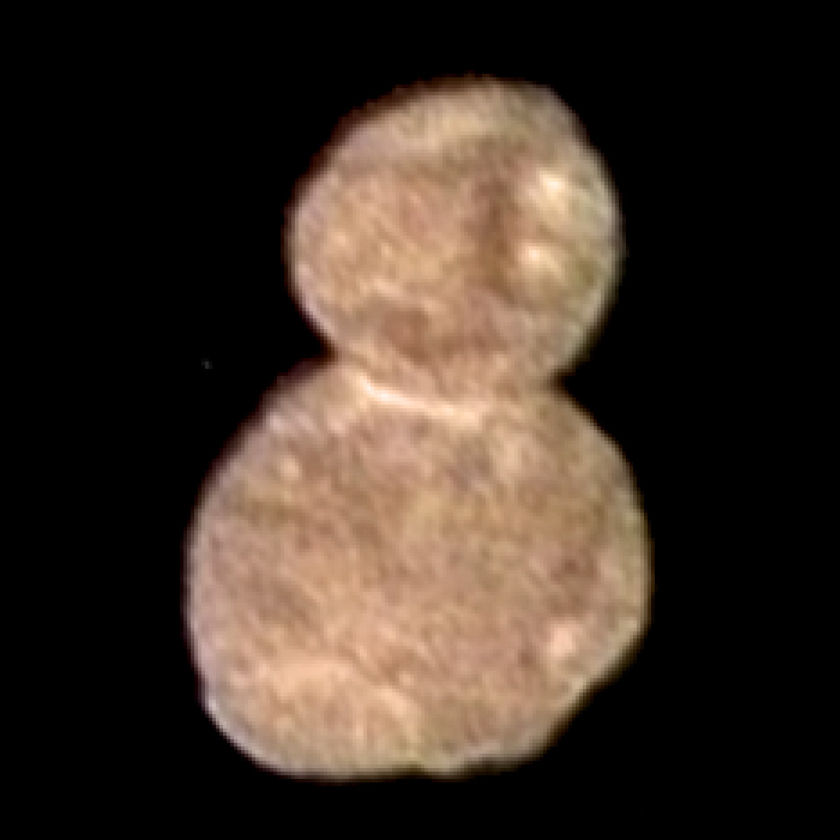 This photo combines a color image taken by New Horizons' Ralph MVIC instrument with a LORRI image taken near the same time. It is an enhanced color image, featuring infrared, red, and blue channels. It was taken at a distance of 137,000 kilometers on 1 January 2019 at 04:08 UT, slightly more than an hour before closest approach. Note the reduced red coloring at the neck of the object.

A few more views of MU69 were released on 3 January, including a second detailed photo taken about 40 minutes later than the first one. A very slight amount of parallax permits a stereo view. 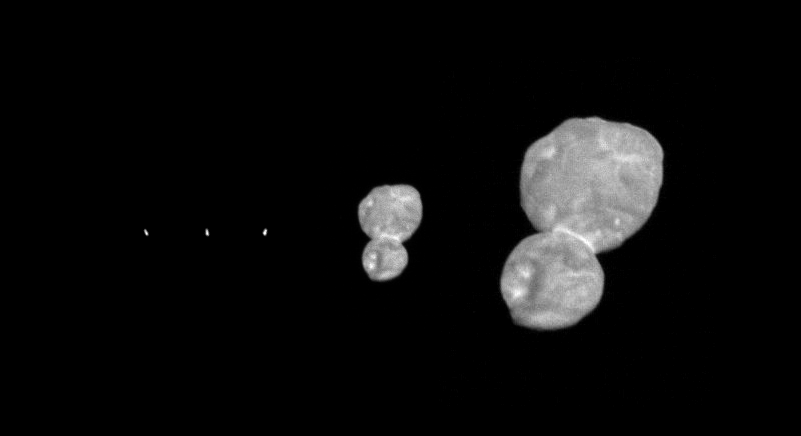 The New Horizons team is sharing its data from the MU69 encounter relatively quickly after acquisition on the APL website. This is a montage of representative raw images, and is up-to-date as of 3 January 2019. Over time, as New Horizons returns more data, the sequence will be filled in. 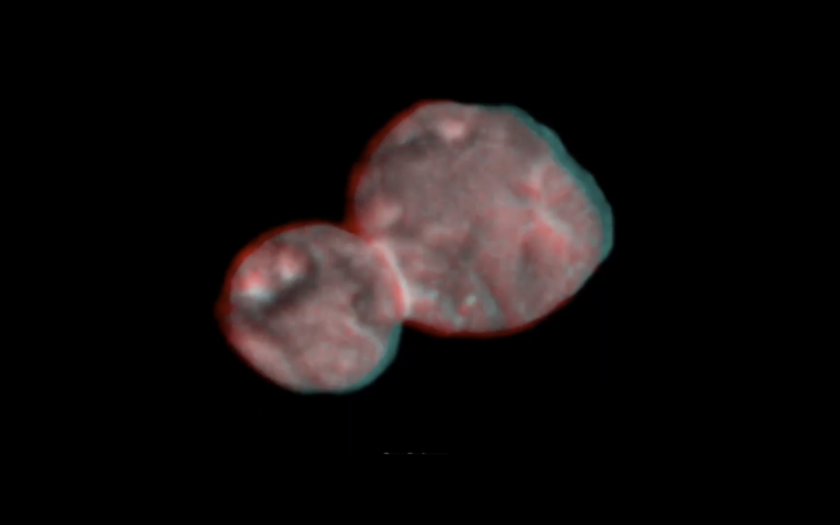 This is a textbook example of a contact binary. Binary means two objects, of course, and contact means that they’re in contact with each other. Separated binaries are very common in the solar system and especially common in the Kuiper belt. But how can a contact binary form? Is it even plausible for two mutually orbiting bodies to somehow come together so gently and just stick to each other while preserving their originally round shape over billions of years?

Solar system formation theorists have been considering this problem for a long time, because bi-lobed worlds are actually the commonest shape among cometary nuclei. The first comet we ever saw up close, 1P/Halley, has that shape. So do 19P/Borrelly, 103P/Hartley 2, and -- an extreme case -- 67P/Churyumov-Gerasimenko, the comet visited by Rosetta. Other comets imaged by radar seem to have that shape, too. Thanks to Daniel Macháček for this marvelous montage. Churyumov-Gerasimenko is in the upper left corner, in all its capybara-esque cuteness. 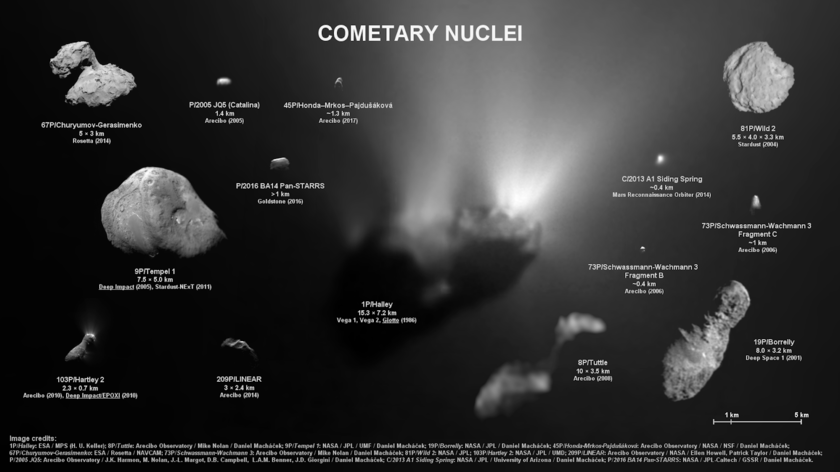 Daniel Macháček. Individual credits for source images are directly in the collage.

Collage of all cometary nuclei imaged by spacecraft and planetary radars. When fully enlarged, resolution is 25 meters per pixel.

We don’t know for sure how any of this stuff formed from the solar nebula in the first place. One currently favored hypothesis is pebble accretion. I won’t go into it here. Augusto Carbillado wrote an excellent blog about the process of planetary accretion for us a few years ago, if you want to learn more.

A recent paper by David Nesvorný, Joel Parker, and David Vokrouhlický that explains how 67P/Churyumov-Gerasimenko may have formed could also apply to MU69. Summarizing other peoples’ work, they wrote that the comet may initially have been a separated binary that formed when a clump of pebbles collapsed under its own gravity. Simulations show that this works physically, and moreover that it’s very common to end up with a binary pair where one object is about 75% the diameter (and therefore about half the mass) of the other. That ratio is common in the Kuiper belt, and is the ratio of the two lobes of 67P. Lo and behold, it doesn’t look far off of the value for MU69, either.

So how does a separated binary become a contact binary? One thing that needs to happen, obviously, is that the two components have to get closer together. In physics terms, their orbit needs to destabilize. Nesvorný and coauthors say the orbit could destabilize in several ways. Small impacts on either object could cancel out some of their orbital energy, allowing them to draw closer to each other over time. The same process might have the opposite effect on other binaries; random chance would separate some wider, while it would bring others closer. If the binary orbit was significantly tilted with respect to the plane of its orbit around the Sun, a kind of orbital dynamic called Kozai cycles could draw them closer together.

Binary systems formed when aggregates of pebbles accreted into separated binaries under the force of gravity. Eventually, the orbit destabilized and the two pieces came into contact at a very slow speed of 80 centimeters per second or so.

“For such low speeds,” Nesvorný et al. write, “impacts are expected to result in accretion of the binary components. This may happen instantly, during a single head-on collision, or after a series of grazing collisions. If the components have sufficient cohesion before impacts, the end result of this process should be the formation of a contact binary.”

How can they get closer together and then...just stick? If they start out as rubble piles, why don’t they just merge together into one, bigger, sort of spherical rubble pile? They probably would, if the whole process happened quickly. The paper posits that in order to keep this merger from happening, you need some time between the formation of the original, separated binary and the collapse of the binary, “a significant delay...possibly as long as ⪆10 Myr, during which the two components of a binary can gain the internal strength (e.g., by modest radioactive heating), and resist disintegration during their later assembly into a contact binary.”

All of this would be very consistent with the appearance of 67P/Churyumov-Gerasimenko. Its density is only half that of water, even though it’s mostly made of dust with only some ice -- its porosity has to be around 80%. Its two lobes have visible layers that don’t line up across the lobes, suggesting that they’re two bodies that formed by accretion and later stuck together. 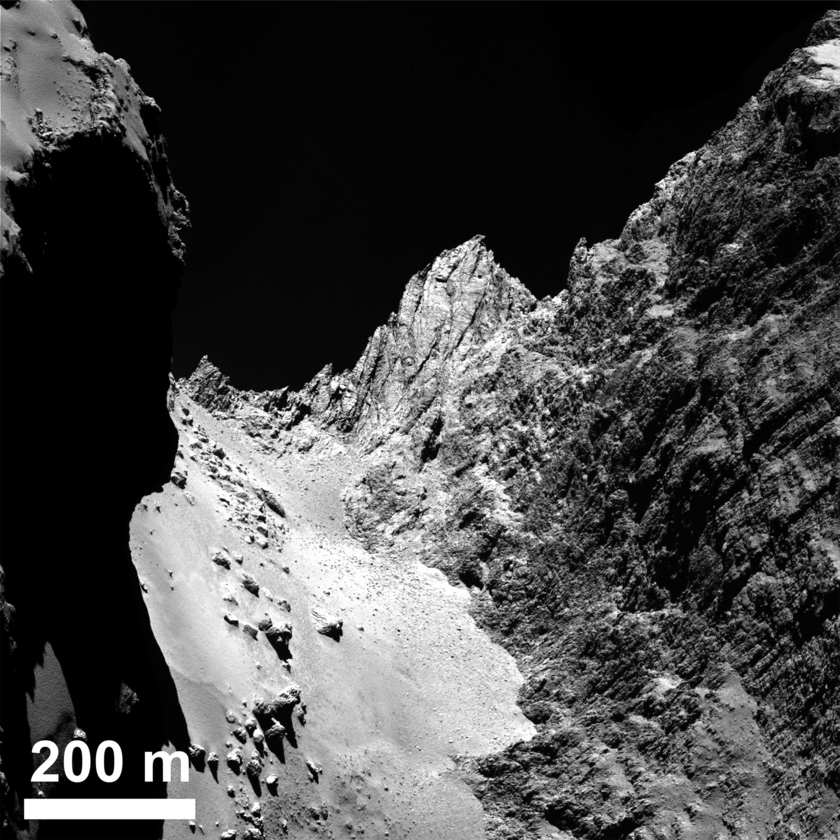 The Hathor region of comet Churyumov-Gerasimenko exposes layers and fractures in one of the two cometary lobes, which now rise as a great cliff over the smooth, rubbly region of the neck, called Hapi.

Very close up, Rosetta saw individual grains making up the structure of the comet. Were these the original meter-scale bodies that formed the initial rubble piles? 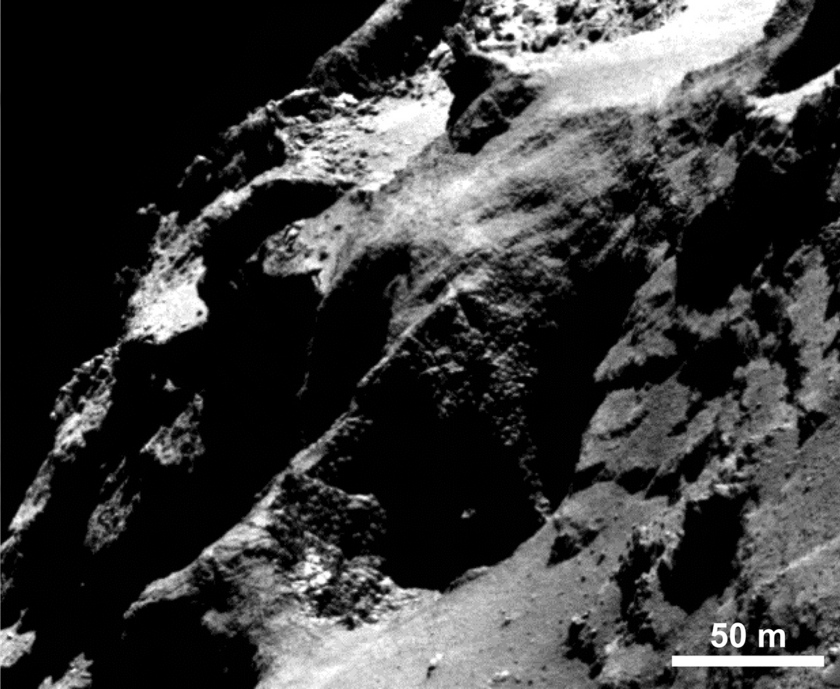 Dinosaur eggs or goosebumps in a comet cliff

As for MU69 -- we’ll never see it as close as Rosetta saw 67P. But you can bet they’ll be looking for signs of its primordial accretion, especially layers and visible sub-objects, and signs of what happened when the two components initially booped together. This may not be easy; 67P’s layers and “goosebumps” are only visible because the comet’s passage close to the Sun is causing it to disintegrate rapidly. MU69 looks very much like what you would expect a comet seed to look like. MU69 will probably never become a comet -- but countless of its siblings have, and will again. Now, we have a baby picture of a comet.

Incidentally, writing this blog post has been a great excuse to go explore my archive of Rosetta images. While we’re waiting for New Horizons downlinks, please go enjoy Churyumov-Gerasimenko’s beauty.

Awesome achievement from the appropriately named New Horizons team! If Ultima Thule has the makings of a comet, I wonder what would finally tip it to be like the other comets that dive towards the Sun? So far the combined gravity (and maybe loss of angular momentum relative to the sun) has not been sufficient to send it inwards. Maybe more collisions, tug from the outer planets, or a star drive-by might do it?

Great post Emily! The brightness of these dark objects is always exaggerated in publicly released images, and stretched to bring out topographic features, but doesn't it seem over done when the color is pushed to the extent in this first decent image?

I absolutely love 'bi-lobed baby comet'! :) I'm totally exhilarated by this astounding feat. It's very enriching to the lives of even us mortal, common laywo/men.

Interestingly enough, Reddit users are calling Ultima Thule the "Snowman", and it is appropriate.

More like a caterpillar or nymph than a baby, I'm thinking, as comets undergo metamorphosis, gaining a coma and tail, and get smaller as they get older. Chondrules, of course, are planet spawn.

Thanks for a very informative post Emily. I would like to know more about what can be inferred from the rotation rate and axis and direction, and whether we know if one face of Ultima Thule never faces the sun.

One twitter user likened the connected lobes to an amoeba undergoing fission. Another likened it to biological cell division. With contrived narratives required for suitable collisions, rather than observations of collisions, it is worth looking at the possibility that a single body is becoming two... somehow...