Today at 19:43 UTC, OSIRIS-REx entered orbit at asteroid Bennu. In so doing, it accomplished both the tightest orbit (at an altitude under 2 kilometers) and the orbit of the smallest object ever. Read more at the OSIRIS-REx website.

UPDATE: At a New Horizons panel discussion during the public event leading up to their flyby of Kuiper belt object 2014 MU69, OSIRIS-REx team member Olivier Barnouin shared a wealth of early OSIRIS-REx science results. I collected them all in a Twitter thread beginning here.

I do have some time, so here we go with OSIRIS-REx science screen caps. First up, some stuff on Bennu's phase curve. It shows "bluing" at lower phase angles. This is information only spectroscopists could love, but I know some spectroscopists, so here you go. 1/n pic.twitter.com/r7RFacBSG8

The arrival at orbit marks the end of the Preliminary Survey phase of the mission and the beginning of the "Orbital A" phase. As I explained in this blog entry about the OSIRIS-REx mission timeline, the first orbit will be in the same plane as the terminator (so, over the poles along the line separating day from night). The alignment with the terminator is to make it so there will be no net effect of solar radiation pressure on the spacecraft's orbit. During Orbital Phase A, the team will work on switching over from using stars as their navigational reference to using surface features as their navigational reference, which will be more precise. The next phase, Detailed Survey, begins in February.

No new images were released during today's announcement. The most recent images on the mission website are these showing the north pole of Bennu. 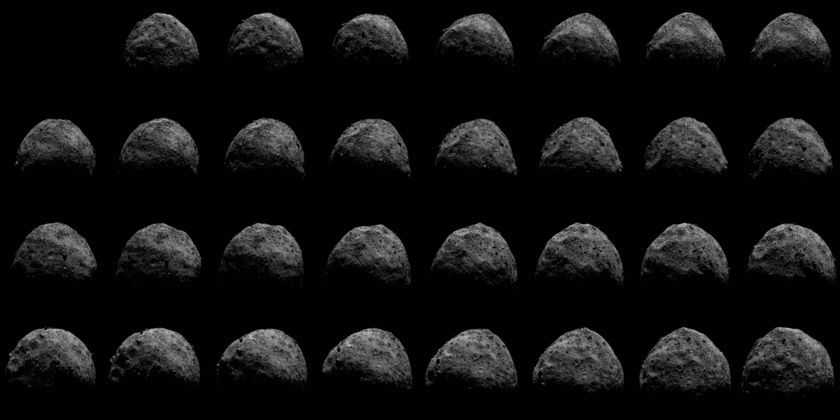 OSIRIS-REx took a series of MapCam images of Bennu over the course of about 4 hours and 19 minutes on 4 December 2018, from 11.4 kilometers away at the beginning of the sequence to 9.3 kilometers at the end. This first pass was one of 5 flyovers of Bennu’s poles and equator that OSIRIS-REx conducted during its Preliminary Survey of the asteroid.

An animation of a full rotation of Bennu from a perspective near its north pole, as seen by OSIRIS-REx on 4 December 2018. The series of 31 MapCam images was taken over the course of about 4 hours and 19 minutes, from 11.4 miles away at the beginning of the sequence to 9.3 kilometers at the end. This first pass was one of 5 flyovers of Bennu’s poles and equator that OSIRIS-REx conducted during its Preliminary Survey of the asteroid.

Congratulations to the team! More successes will be coming! We'll keep watching for them!