Ryugu has continued to grow in Hayabusa2's forward view, resolving into a diamond-shaped body with visible bumps and craters! 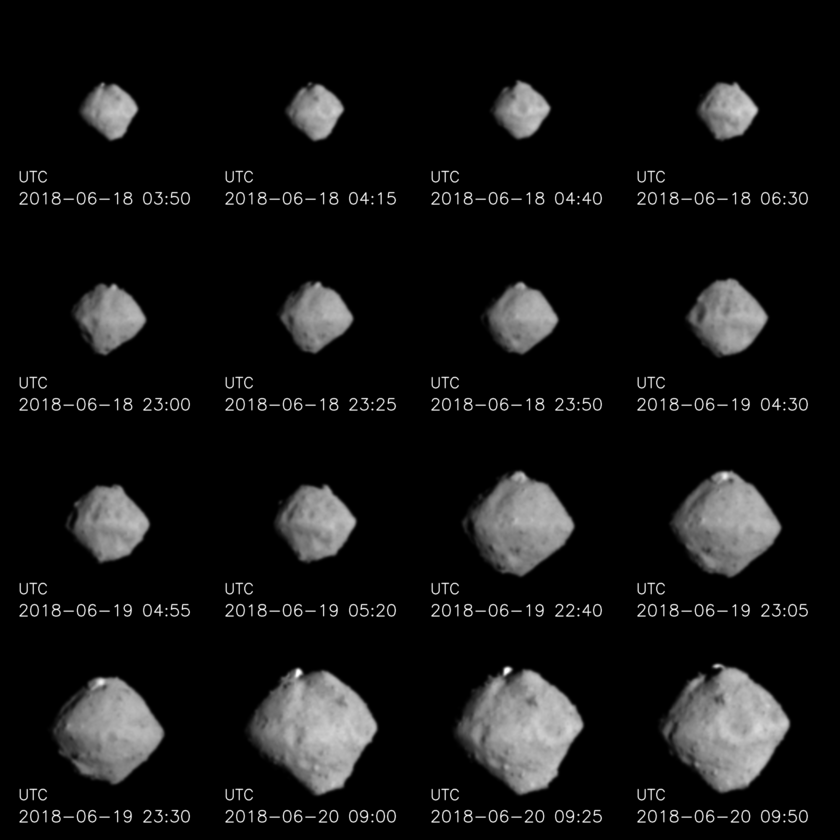 These 16 images of Ryugu were captured by Hayabusa2's ONC-T (Optical Navigation Camera - Telescopic) on June 18, 19 and 20. Image processing was used to interpolate between the pixels during enlargement and emphasize light and dark regions.

"The varied geography of Ryugu"

As we approached Ryugu and were able to distinguish individual features in the asteroid's topology, it became clear that Ryugu has a land of rich terrain. Numerous clusters of rock roll on the surface. Among these, a large rocky mass (about 150m across) stands out on the upper part of Ryugu due to its brighter color (higher reflectivity). The belt-shaped ring of peaks that surround the equator are also slightly brighter than their surroundings. This color difference may reflect a difference in material composition and the size of the particles that form the rock. We can also see many sunken regions that look like craters. These depressions may have been made in collisions with other celestial bodies. A structure that looks like a grove is also visible.

The existence of such varied topographies is an indication that Ryugu has undergone a complex evolutionary history. It is generally believed that small asteroids that are less than 1km, such as Ryugu, were created fairly recently in the Solar System's history (within several hundred million years) during the fragmentation of a larger parent body. Ryugu's terrain will tell us about the division from the parent body and the asteroid's subsequent evolution.

The spacecraft is now experiencing Ryugu's gravitational tug, accelerating it toward its destination. Hayabusa2 has adjusted its course six times to brake its motion with respect to the asteroid and to do optical navigation. In the final stages of the approach, navigators weaved the spacecraft's path back and forth slightly, to create parallax between Ryugu in the foreground and the stars in the background. The optical navigation images they took has dramatically increased the accuracy of their estimation of the range to Ryugu, necessary for planning the final approach.

While at a distance of 2100 kilometers, they conducted a thorough search for satellites in the space around Ryugu, both for science and for spacecraft safety. Ryugu's gravity is small, so its gravitational influence (its Hill sphere) extends only out to 90 kilometers' altitude. No satellites were found, ruling out the existence of satellites larger than 50 centimeters in diameter. As they approach the asteroid, they'll continue doing hazard searches to make sure the space around the asteroid is safe for space flight; they'll have to perform another search before getting closer than 50 kilometers, where hazards could've been hiding in Ryugu's glare during the previous search.

On June 7, Hayabusa2 pointed its thermal infrared imager at Ryugu for 8 hours (from 08:30 to 16:30), taking 37 images. The double-humped light curve they measured matched Earth-based estimates of Ryugu's rotation rate of about 7.6 hours. As Hayabusa2 approaches, they'll refine the rotation rate.

The current plan for Hayabusa2 activities is as follows, with all future dates being subject to change: 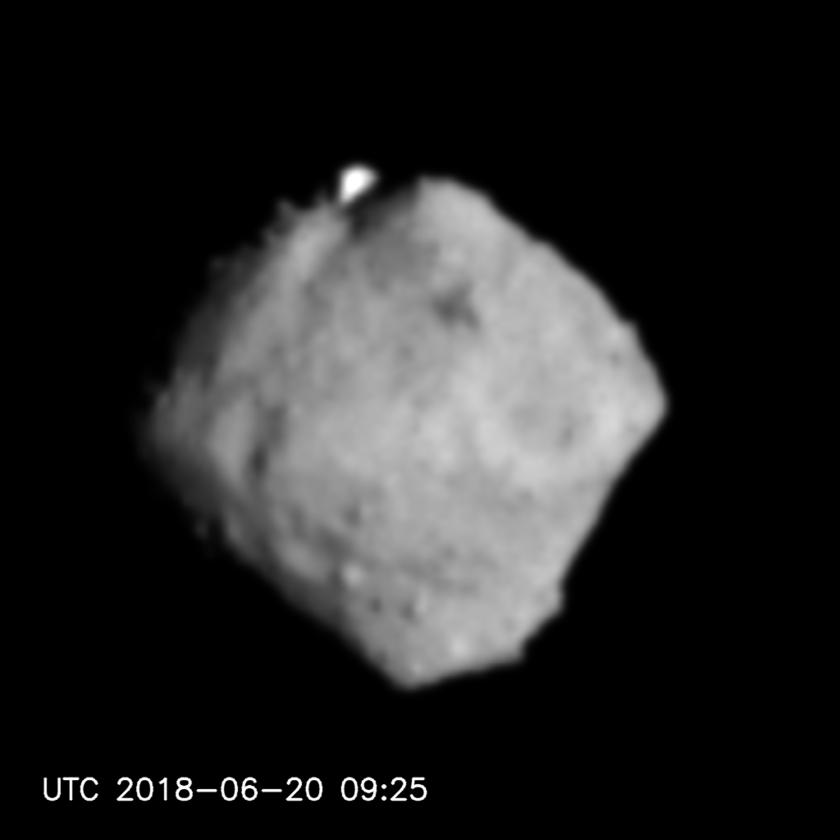 This image of Ryugu was as captured by Hayabusa2's ONC-T (Optical Navigation Camera - Telescopic) on June 20 from a distance of about 100 kilometers.

The boulder on the pole looks like there's a divot coming from the equator. A low-velocity impact then bounce and roll?

The shape is like a trapezohedron, or as I like to see it, a crude 10 sided dice. Cool!