An honor from The Open University

Last year, I received a delightful letter from Peter Horrocks, which read, in part:

It is with great pleasure that I am writing to you as the Vice-Chancellor of The Open University to offer you the honorary degree of Doctor of the University in recognition of your services to the Sciences. You were nominated for this award as a result of the exceptional contribution that you have made in communicating planetary and space science, and for your enthusiasm and achievements in public engagement with Science. Your work sits well with the ethos of The Open University here in the UK, where we are known for our innovation, flexibility, accessibility, and social justice mission.

Today my younger daughter and I attended a graduation ceremony at the Barbican Centre, in London, where I received the honorary degree. An honorary doctorate is not the same as an academic doctorate. But between this and finishing my dissertation-length book this year, I feel like I've accomplished enough to stop awkwardly correcting people who presume I'm supposed to be addressed as "doctor"! (I'm not.)

The Open University graduation ceremony was the most extraordinary I have ever witnessed. The university's flexibility and accessibility means it graduates a wider variety of students than most. There were many older students, many parents and carers, and a couple of mother and daughter pairs graduating! And I hadn't appreciated before witnessing today's ceremony how that flexibility enables people with disabilities to study at whatever pace and at whatever time their conditions permit. It's a tremendous university and I'm very proud to be connected to it. 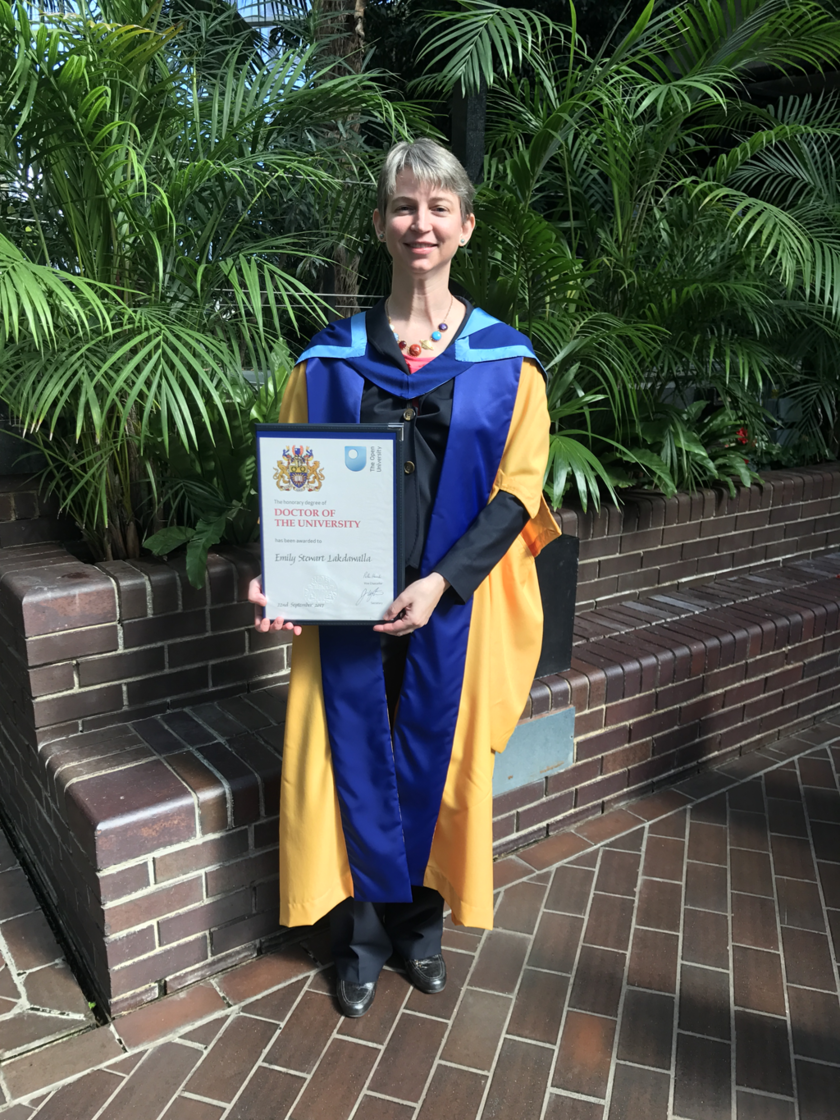 Following is the presentation speech delivered in my honor by Open University senior lecturer Victoria Pearson:

Emily originally studied geology at Amherst College, Massachusetts, and became interested in the geology of other planets while working as a classroom teacher. During her graduate studies at Brown University, she discovered the vast archive of NASA images: huge numbers of incredible photographs of the Solar System which had barely been seen. As a consequence, she became interested in public engagement and education.

In 2001, Emily joined the Planetary Society, the major non-profit research, outreach and advocacy body based in Los Angeles. Initially, she worked on the Red Rover Goes to Mars project, involving high school students on exercises associated with the Rover exploration projects.

Additionally, Emily was an occasional blogger for the Planetary Society and in 2005, she was asked to blog about the Cosmos 1 solar sail mission. Though the mission itself was a failure, the blog became a tremendous success. Emily subsequently tracked the spacecraft Cassini, studying Saturn and its rings, as well as ongoing rover exploration of Mars. Her lucid, accessible and engaging style won her a huge following and the blog continues to go from strength to strength, attracting specialist researchers as well as the general public.

Emily is now a Senior Editor at the Planetary Society, also known by the uniquely inspiring title ‘Planetary Evangelist.’ In this capacity, she shares the latest news from space, explains planetary science to general audiences, and shares awe-inspiring images. She is a contributing editor at Sky & Telescope Magazine and hosts a weekly radio show for the Planetary Society.

Emily is a regular commentator on national and international media, and hosts lively discussions on social media.  Her work is helping to build a community which connects experts and enthusiasts in an informed and productive debate. Since 2005, for example, she has been an administrator of the forum UnmannedSpaceFlight.com, where amateur enthusiasts turn the data from space missions into extraordinary images.

Emily sets an example in public engagement and communication for the whole scientific community to follow, and she is a particularly inspiring example for women looking to pursue careers in science, technology, engineering and maths. Asteroid 274860 is named Emilylakdawalla in recognition of her achievements.

The Open University’s planetary and space sciences research programme is one of its strongest assets.  Our contributions to the Rosetta, Exomars and other missions puts us at the forefront of the international planetary and space sciences community.   Our active research programme also translates into practical benefits on Earth, including the incorporation of important discoveries into our teaching materials, tuition and wider student engagement.

Significantly, our research students play a huge role in the Open University’s scientific community, both by furthering fundamental science and engaging in its communication.  It is our research students, specifically members of the School of Physical Sciences Hooke Society, who nominated Emily for this honour. It is a pleasure to recognise Emily’s work on their behalf.

By the authority of the Senate, I present to you for the degree of Doctor of the University, Emily Lakdawalla.

Good day everyone. It is a great privilege to stand before you and accept the degree of Doctor of the University. The Open University's philosophy to provide the opportunity of education to all comers complements my own commitment to making sure that the wonders of space science are available to everyone. The beautiful photos returned from space robots across the solar system are a treasure. It's a treasure that increases in value the more it is shared with diverse people who can be inspired by it.

Therefore I am especially happy that the idea to nominate me for this honor came from Open University students, and specifically, the Hooke Soc. We may explore the solar system through the eyes of robots, but we remain human. By fostering discussions of the barriers to entry experienced by under-represented minorities, and by feeding the social and emotional needs of young researchers, organizations like the Hooke Soc build social scaffolds. This work is every bit as important to the furthering of the human endeavor of science as the gathering and analysis of data.

I wish to thank Mr. Horrocks and the Senate of the Open University for this honor. My thanks also go Rhian Chapman of the Hooke Soc for nominating me. Thanks to the fifty thousand members of The Planetary Society for supporting me in my work for the last 16 years. And finally, thanks to my children, one of whom is sitting in the audience today, for inspiring me to see the world with fresh wonder and new questions every day. 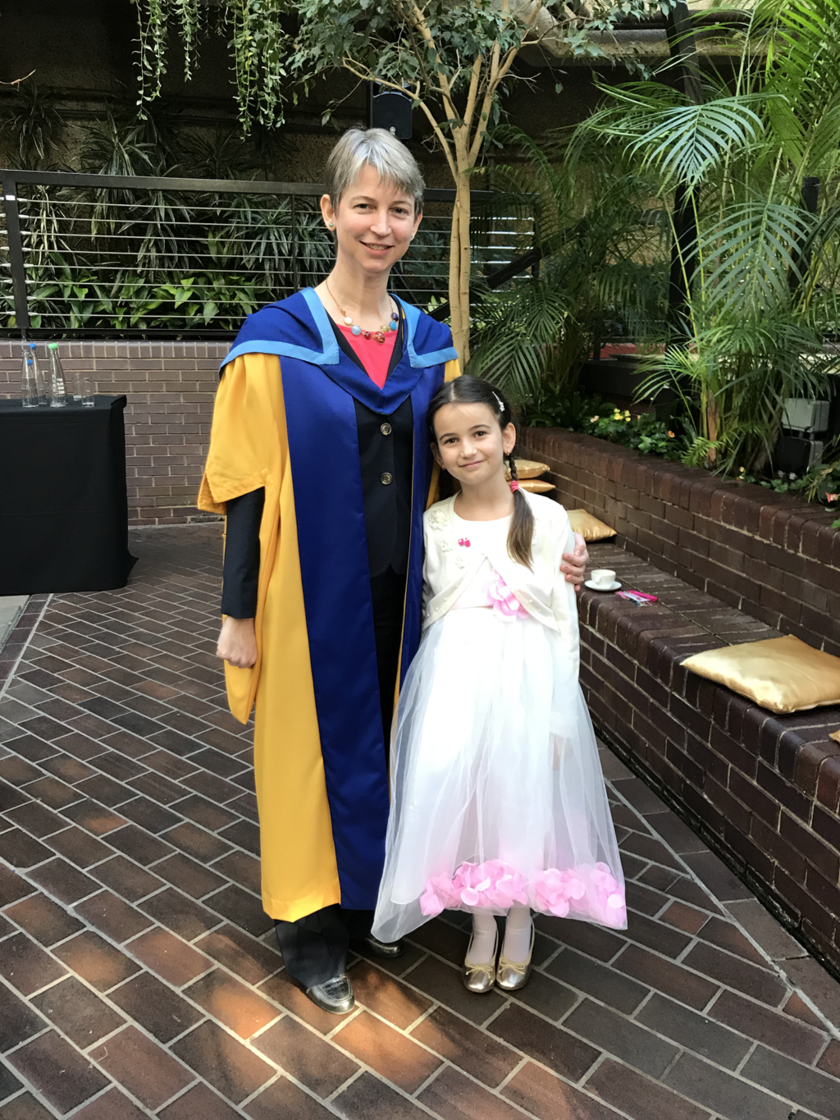 Emily, Thanks for providing good publicity for The Open University. I am currently working on my PhD in Planetary Astrophysics (remote from the USA) from the same university in the School of Physical Sciences (Astronomy) Department. My dissertation is on "Far-UV Spectroscopy of Saturn's Moon Rhea."

Congratulations Emily. I studied with the Open University in the 80's and know what a wonderful University it is. My interest in space continues and I value your contribution to our greater understanding. John Wheeldon

Heartfelt congratulations, Emily! I'm a science writer with a background in astrophysics, and I've looked up to your varied work and outreach efforts for a long time. Your support of, and participation with, the community of image-processors is inspiring. Your blogs are so informative. You help make the Planetary Society's web home an essential link for students. (I also admire The Open University. I haven't studied or taught there, but was a project supervisor with Swinburne Astrophysics Online in the past, and really enjoyed interacting with the students of all ages and occupations and in far-flung locations.) Hurray!