The Cassini Saturn orbiter first spotted lakes in Titan's northern polar region using its radar instrument very early in the mission. The lakes were initially invisible to Cassini's optical instruments, because when Cassini arrived it was winter at the north pole, so no sunlight ever reached them. Over its long, long mission Cassini has seen Saturn and Titan go through equinox, and now they are approaching northern summer solstice. That keeps the lake district in the sunlight for most of the Titan day, and also gives sunlight a shorter path through Titan's smoggy atmosphere to the north pole, making images clearer. Recently, image processing enthusiast Ian Regan has been working with Cassini photos, developing his own recipe for processing the fuzzy raw frames into crisp, colorful views. 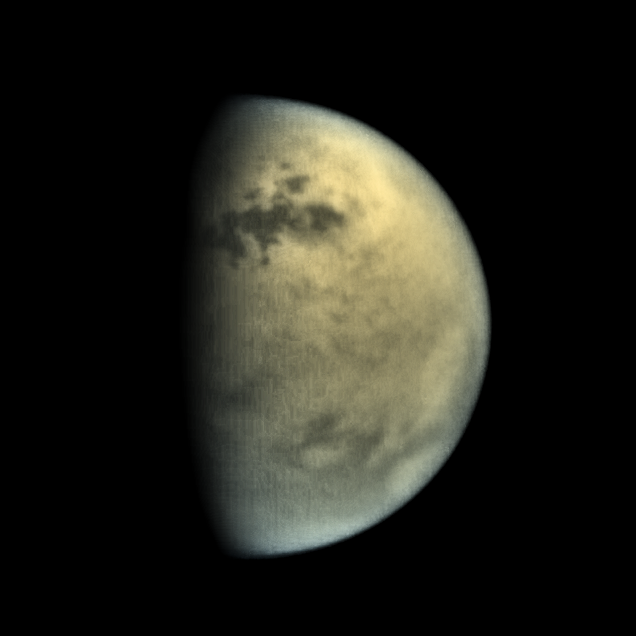 A portrait of Titan using images taken through several infrared filters processed into "pseudocolor" reveals its northern lakes region receiving summer sun. To the south of the lakes, near the bottom of the disk, is the Belet sand dune region. 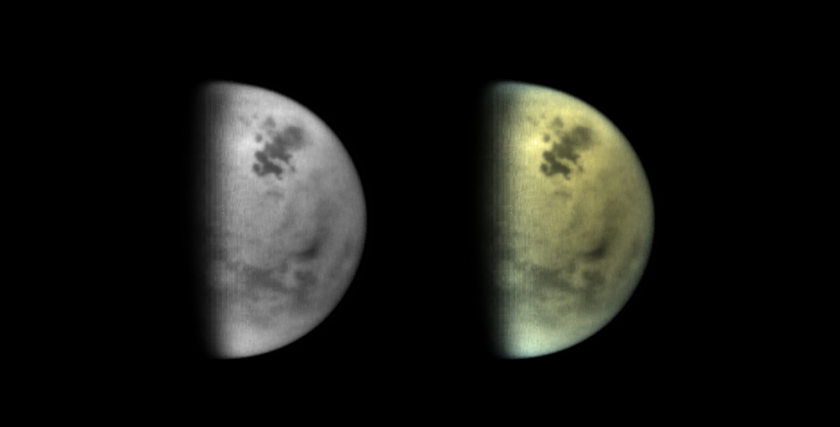 A portrait of Titan using images taken through several infrared filters (left) processed into "pseudocolor" (right) reveals its northern lakes region receiving summer sun. Kraken Mare, on the south, has crisper edges; Ligeia Mare, to the upper right, has fuzzier edges. To the south of the lakes, near the bottom of the disk, are the Senkyo and Belet sand dune regions.

A near-global view of Titan shows its surface from the north polar lakes to the equatorial dune fields of Fensal-Aztlan and Senkyo. The center image shows Titan approximately as it would appear to the human eye, its surface hidden by haze and its north pole experiencing a summer "hood". On the right, surface details are revealed by looking at Titan in an infrared wavelength ("CB3") at which methane is relatively transparent, and correcting for the affect of the methane in the atmosphere by dividing that image by one taken in a wavelength where methane absorbs light. On the left, the enhanced surface image has been colorized using data from methane filters in a way that mimics the natural color of Titan.

Ian kindly shared his recipe with me. He begins with raw Cassini images of Titan taken through infrared filters CB3, MT1, and MT3, common choices for Cassini Titan imaging. These filters block all but very narrow slices of the electromagnetic spectrum from reaching Cassini's camera detector. By rotating different filters in front of the camera, Cassini's scientists can study how Titan reflects sunlight at different wavelengths, see structures in the atmosphere and on the surface, and sometimes even detect compositional differences from place to place. MT1 and MT3 are in wavelengths where methane in Titan's atmosphere absorbs light (at about 620 and 850 nanometers). CB3 is at 950 nanometers, a wavelength in which methane is relatively transparent, so surface features become visible. Cassini usually takes several CB3 images in a single observation, which can be stacked to improve the signal. 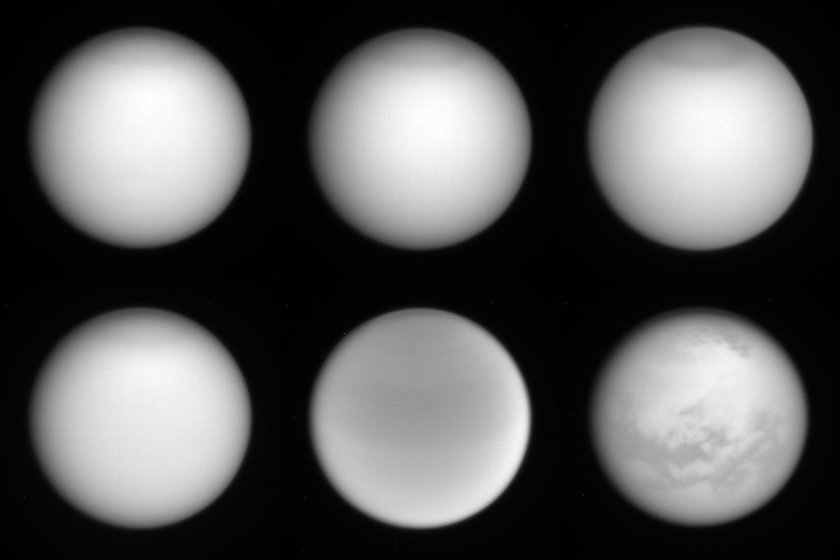 In most visible and near-infrared wavelengths of light, Titan appears nearly featureless, its smoggy atmosphere smoothly reflecting light like a billiard ball. The top three images show Titan as seen through medium-band red, green, and blue filters, the filters typically used to create color photos. In the bottom row, two images were taken through filters in which atmospheric methane is slightly (left) and strongly (center) absorbing, 620 and 890 nanometers, respectively. The rightmost image is taken at a near-infrared wavelength of 940 nanometers, where the atmosphere is somewhat transparent, so surface features are vaguely visible. Cassini took these images with its narrow-angle camera on 10 September 2016.

Ian uses the free and open-source ImageJ for image manipulation, aided by the StackReg and Bio-Formats plugins. Following is the recipe he uses; it sounds like these tools could be useful for other image processing projects.

I thank Ian for sharing his notes. Want to see more of his work? Check out Ian's page in The Planetary Society's amateur image library, and see much more on Ian Regan's Flickr page.