UPDATE: Samba has now imaged Earth! Scroll down to the bottom of this post to see the first Earth image sequence!

Behold: The first image ever taken by a camera that's been flying in space for nearly 16 years. There's nothing but black space in it, but with luck the same camera might catch more substantial views in the future. 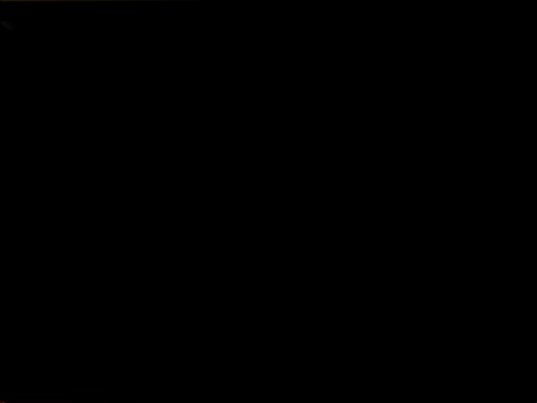 The camera is called the Visual Monitoring Camera (VMC), and it's on one of the four Cluster spacecraft, Samba. It's identical to a camera that the Mars Express spacecraft routinely uses to capture global images of Mars. The Cluster VMCs got to space before the one on Mars Express did. Like the VMC on Mars Express, they were intended for use in watching a critical spacecraft event, the separation of the two pairs of Cluster spacecraft. The VMC on Rumba caught a diminishing view of the departing Tango hours after launch, on July 16, 2000, and has never been used again. Because of a computer reset that happened at launch, the VMC on Samba, which was supposed to capture images of the departing Salsa, was actually never used at all -- until now.

The four Cluster spacecraft launched in connected pairs, Tango with Rumba and Samba with Salsa. One in each pair carried a small camera to document the separation of the pairs. This image, taken from Rumba, shows Tango floating free over the Mediterranean and the Nile delta. The small black dot at upper right is a blemish on the camera.

Inspired by the "Mars Webcam," the Cluster mission decided it was worth a try to turn on the VMCs, and has been posting frequent updates about the effort on its Twitter account, which I'll paraphrase here. Because of the spacecraft's depleted power condition, there is not ordinarily enough power to run these cameras -- all of the power is needed to continue science. But there are two periods each year when the spacecraft experience daily eclipses. Their batteries having long since died, the spacecraft have to shut down completely through every eclipse, and be reactivated after. Under these conditions, it's difficult to operate the science instruments, so most instruments are kept turned off through eclipse season. That leaves power available for VMC to be turned on during the part of the orbit when the spacecraft is not in eclipse. So far they have just attempted to turn one back on, Samba (because Samba has greater power margins than Rumba).

The Cluster spacecraft also have virtually no maneuvering fuel left, and what little they have won't be used for pointing photos. So the mission controllers have to make do with whatever happens to pass through the camera fields of view. What could the Cluster VMCs image? The bottom side of the spacecraft, and with it the VMC, perennially point north, perpendicular to the ecliptic. That means only one view of Earth can ever pass through the field of view -- a view of the southern hemisphere.

But don't get too excited about potential images of Antarctica like Mars Express VMC gets of Mars' south pole. The Cluster orbit is not a polar one; it's inclined 131 degrees. The camera field of view is 40 degrees wide. They'll image Earth from a distance of about 60000 kilometers. There's only a small part of the orbit in which they can hope to see Earth. So the best they can hope for is to catch part of Earth in one corner of the field of view.

At least that's what they thought. Yesterday, they got their first test images down, expecting them to be entirely black. Many were black, but a few were not quite entirely black; some bright pixels showed up in one corner of the images, changing position slightly from image to image. It turned out to be the spacecraft's low-gain antenna, poking up from the same deck on which the VMC is mounted. Seeing it gave the team confidence that the camera was working (beautifully, in fact), and incidentally helped them determine "exactly how the Field of View is oriented in the spacecraft and relative to the Sun."

What's next? The test was run right when Samba exited eclipse but before all its systems were activated, when the power margin was largest. Next they will test it later in the orbit, to make sure that it works when the spacecraft is fully activated, so has less power margin. If that test works, then on February 23 at 5:36 UT they will command Samba to shoot photos that have the right geometry to capture something of Earth. They will downlink the data at 15:30 and check to see what they get! Stay tuned to their Twitter feed.

Here are some stats on the camera:

And, just for fun, here is a zip file containing all 27 images captured by the Rumba spacecraft of the departing Tango after launch on July 16, 2000. They are in JPEG format and need to be debayered to produce color.

Samba, one of the four Cluster spacecraft, took this series of images of Earth using its recently reactivated Visual Monitoring Camera on February 18, 2016. The spacecraft spins at 15 rotations per minute, and the VMC is mounted in a position offset from the center of the spin axis, making Earth appear to whirl around in circles.

I've also now posted a page containing all of the Cluster images that I've gotten my hands on. Enjoy!

LOL. After of few seconds of looking at that image, I had to hold onto something to keep from toppling over.