Yesterday I was checking out the latest photos from Curiosity on Mars and came across one Mastcam image that was particularly rock-layer-rich:

Is this enough rock layers for you? Curiosity, sol 986 http://t.co/fcHlX3l9V3 pic.twitter.com/0zpqtyzEYu

It was part of a larger panorama exploring a finely layered hill in the foreground and the flanks of Mount Sharp in the background: 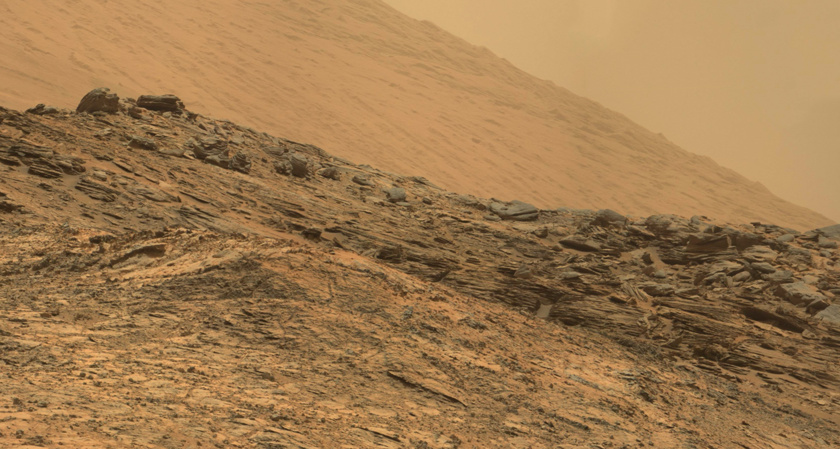 Later yesterday, I was working my way through some rover mission archives and came across another rock-layer-rich outcrop:

Except that isn't from Curiosity. It's from Spirit. It's a view of the western edge of Home Plate, taken on the very sol that Spirit became trapped in the sand at Troy. I was struck by the fact that, superficially, the thinly layered rocks are similar, but geologically, they're very different.

Curiosity's layered rocks are virtually all sedimentary, formed when either water or wind transported and deposited broken-up bits of other rocks into the Gale crater basin. Rocks around Home Plate are mostly related to volcanism: they are deposits of tuff (volcanic ash that fell out of the air) or accretionary lapilli (little beads of ash that formed in the sky before falling to ground, like volcanic hailstones). They are sort of like sedimentary rocks, but the "sediments" that they're made of did not start out as other rock deposits; they are brand new baby rock material, freshly formed from a melt. In rare places at Home Plate, there are windblown sandstones, but most of the story is volcanic. The rocks at Home Plate have been changed by the action of hot mineral-rich groundwater, so water was involved, but only after the fact, and even that was related to heating from underground volcanism.

It just goes to show that as much as we all love images from Mars, images are not usually enough to understand the geology of a place. There are lots of different kinds of ways to make layered rocks. Images provide crucial context for other kinds of observations, which are usually much coarser and sparser: spectral measurements from orbit, elemental compositions from robotic arm instruments, that sort of thing. But you can't understand Martian (or Earth!) geologic history from photographs alone.

It was fun to play with the archival Spirit data. In case you're interested in playing with it, too, here are some resources:

New 0x630 images from Lorri; time to get stacking!

omZarquod, thanks for the links!!! I won't be getting to the stuff I was planning for today, but that's ok... :) Excellent article as well.