Imagine if you flew a spaceship to another planet. Your spaceship is a rover. It moves, which changes its position and orientation. Like all spacecraft, your rover has gyroscopes to help it "dead reckon" how much it has moved, but their accuracy is limited, so over time, errors build up. In order to steer it accurately, you need a way to measure its orientation in space. There is no Global Positioning System on this other planet. You need a different method to measure your orientation and position. Fortunately, an ancient method works on other planets as well as it does on Earth: steering by the Sun. By comparing the actual position of the Sun in the photos to the positions we predict, we can update our  reckoning of the rover's orientation in space.

The photos of the Sun can serve other purposes. For example, their brightness or dimness tells you how opaque the sky is, and hence how much dust is in the atmosphere. Or, if you are careful to take the photos of the Sun at the same time of day, every day -- say, 11:02 a.m., Local Mean Solar Time -- you will discover a unique pattern to the Sun's motion in the sky, unlike its pattern in any other world's sky. Behold, the Martian analemma: 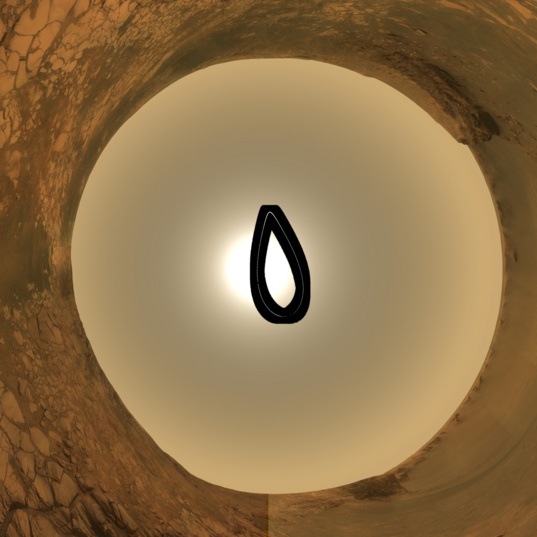 This Martian analemma shows the seasonal apparent motion of the Sun as seen by the Opportunity rover, as well as the nearly rover-killing faintness of the Sun during the 2007 global dust storm. The tear-drop shape is due to the axial tilt and elliptical orbit of Mars—Mars is farther from the Sun, and moving slowly, when the Sun is seen at the pointy top, and closer to the Sun and speedy when the Sun is seen at the rounded bottom.

What are we looking at here? It's composed of image data from the Mars Exploration Rover Opportunity. It's an unusual projection for a daytime photo, centered on the zenith of the Martian sky. It is framed by the panorama that Opportunity took between sols 1332 and 1379 (October 23 to December 11, 2007), while investigating rocks at Duck Bay inside Victoria Crater. (The panorama is mirror-reversed because of the point of view of the projection, which is looking up through the surface at the zenith, like a sky chart you'd use to find stars on Earth.) Above that panorama is the full dome of the sky, presented as the color it would appear if you were standing on Mars, based on color data taken through six different-color filters on sol 738 (February 10, 2006). And then there is the teardrop shape at the zenith.

The teardrop is the Martian analemma -- a visualization of how Mars' orbital properties influence the apparent position of the Sun in the sky over one Martian year. The analemma on Mars has a very different shape from the figure-eight pattern of the analemma on Earth. (For a thorough explainer on Earth's analemma, read this excellent blog by Ethan Siegel.)

The Opportunity analemma image was assembled by Mark Lemmon, who is master of all rover observations of things in the Martian sky; the image was released on the Texas A & M university website today, as part of a story on a new paper by Lemmon and coauthors on 5 Mars years of atmospheric study by Opportunity. It includes 219 images of the Sun taken through a neutral-density filter at about 11:02 a.m. local mean solar time, every third sol from sols 880 through 1549 (July 16, 2006 to June 2, 2008). The background to the solar images appears black, because the solar filter blocks most light. The teardrop shape arises because of the shape of Mars' orbit, and the tilt of its rotational axis. The pointy end of the teardrop, where the solar images are close together, is where Mars is near its aphelion: farthest from the Sun, and moving slowest. The broad end of the teardrop, where the solar images are farther apart, corresponds to Mars' passage through perihelion, where it is moving fastest. About half of the images were actually not taken close enough to the normal 11:02 time, so were reprojected to the Sun's calculated 11:02 position.

There are two breaks in the teardrop pattern. One, on the left side, is where one sol is missing, when operational demands prevented them from taking the image on that sol. The other break, at lower right, is where an enormous dust storm dimmed and even blocked out the Sun for many sols; some sols are missing because the rover had to be shut down to wait out the dangerous period of low power levels.

I knew Bill Nye would be thrilled to see this image, because understanding Earth's analemma is part and parcel of his fascination with sundails. I showed it to him when we were together in Washington, D.C. last week, and he was as psyched as I expected. "Most of us expect timekeeping to be nearly perfect, yet few of us know this pattern -- the analemma. Our ancestors reckoned the calendar we use today by learning the shape of the analemma over the year on Earth. Knowing the analemma's shape on Mars teaches us that much more about our solar system and our relationships to the stars. Who knows what insights will come next?"

Oh wow, now I know what Tom Hanks was doing in Castaway! http://www.solsticecalendar.com/wp-content/uploads/2009/06/analemm-in-cast-away.png

Is there a reason that the Earth / Sun analemma is roughly a figure 8, while the Mars / Sun one is a teardrop instead? Perhaps the Mars orbital eccentricity play into it?

Bill, according to APOD, you are correct. http://apod.nasa.gov/apod/ap140516.html