Philae update: First of four "go-no-go" decisions is a GO!

It's been a day of calm before the storm here at the European Space Operations Centre in Darmstadt, as we get ready for the big event tomorrow: Philae's hoped-for landing on a comet.

There have been two press briefings today. The second one is actually going on right now, but the most important piece of news was shared at the start: the first of four "go-no-go" decisions has been made, and it's a "go." Mission navigators have gotten data back from Rosetta that indicates that the spacecraft is on the correct trajectory to deliver Philae to the comet. At any of the later "go-no-go" points, they could abort the landing; if they did that, it would take two weeks to bring the spacecraft back to the right position with respect to the selected landing site. One down, three to go. The next three decisions happen at 0:00, 01:35, and no ater than 07:35 UT.

This morning's press briefing was just a preview, mostly benefiting people who haven't been paying close attention to the mission; but there were a few interesting tidbits.

Clearly, the risk of the landing and the uncertainty of success is weighing on everyone's minds now. To make an editorial comment, I think ESA missed an opportunity this week: there should have been a big press release on Monday, coordinated with the gorgeous results presented at the Division for Planetary Sciences meeting. The resulting "Rosetta is a great scientific success!" message would have been a matter of public record, no matter what happens with Philae. I say this knowing full well that there are political considerations (both within the mission's science teams and outside ESA) that prevented ESA from doing the big splash that I am sure they would have liked to do -- ESA is not the reason that there was no Rosetta science press release this week. But I think it's a shame. Hopefully Philae will be a fantastic success and there will be no repercussions. But if Philae fails, it will be hard to correct the public impression that the whole mission is a failure. ESA has seen that, with Mars Express: it's a fantastically successful mission, but the failure of Beagle 2 strongly influenced public perception of Mars Express success.

More from the morning press briefing:

The next media event is tomorrow at either 7 or 8 am, local time. I'm told that ESA expects 400 journalists here. It's clearly straining their capacity. I expect fistfights over electrical outlets. One way or another I'll find a spot to report from, and keep bringing you the latest news!

I've updated my timeline with one or two corrections, and I'll keep doing that as I follow events on the mission. Stay tuned...

Edited to add: at the end of the day, this happened. This is Klim Churyumov, one of the comet's co-discoverers, with a 3D model of Churyumov-Gerasimenko. 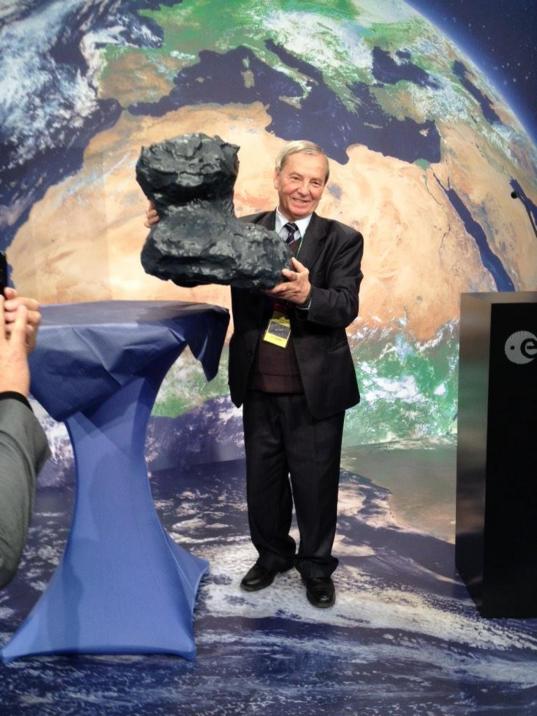 The Lander PIs in Cologne will have a very hard night. I hope they find a few hours worth of sleep to get into the first science sequence well. I wait here and will hopefully get the first COSAC data when available. Here in Göttingen the institute is deprived of all the people which had anything to do with Rosetta and so the third and fourth row people are re-named Rosetta experts and will be dragged into the lime-light. I hope to survive.

75% is a lot more than I was previously expecting. GO, ROBOTIC SPACE LARA CROFT, YOU CAN GRAB THAT LEDGE.