Getting to Mars is a major engineering accomplishment, but science can't happen until you have data. On Sepember 22 at 02:24 UTC, Earth received word that MAVEN had ended its orbit insertion burn on time, completing its journey to Mars. Today MAVEN has released some of its very first data, taken by the Imaging Ultraviolet Spectrograph just eight hours after arrival. Congratulations to the MAVEN science team -- now, get to work! 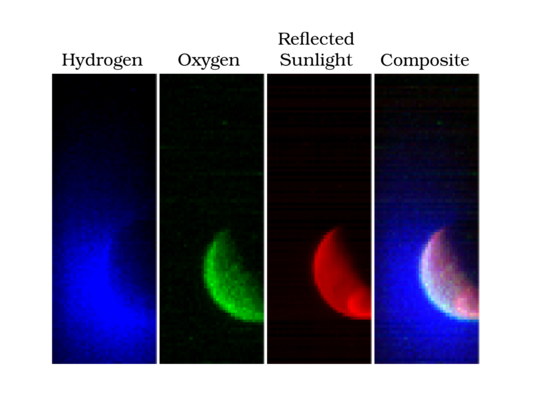 The Imaging Ultraviolet Spectrograph (IUVS) instrument obtained these false-color images eight hours after the successful completion of Mars orbit insertion by the spacecraft on September 22, 2014.

You may have heard that MAVEN doesn't have a camera, so how do we have images? Like all of MAVEN's instruments, IUVS is designed to allow us to study Mars' atmosphere. Its ultraviolet eyes can detect emission from molecules and ions that are common components of Mars air, mapping the distribution and abundances of things like carbon dioxide, nitrogen, carbon monoxide, hydrogen, and the species you get when you ionize any of these, like C+, CO+, and CO2+. It can measure the ratio of deuterium to hydrogen, and map any variations from place to place. Unlike a camera, its data aren't usually all that useful in snapshot form, or even as individual plots; the IUVS team will be taking data throughout the mission and using it to generate 3D models that describe how different materials exist and move throughout the atmosphere.

But there's one particular type of data that IUVS will be generating on a regular basis that's amenable to representation in 2D -- that is, picture -- form. Every orbit apoapsis, when it's relatively far from Mars so can't do its high-resolution scanning for atmospheric species, it does takes images, constructing a full-disk view of Mars from several horizontal strips. The images show airglow in the far-ultraviolet, and sunlight reflecting off of ozone, dust, and clouds in the mid-ultraviolet. The photos released today represent one such strip, and they show most of Mars' visible disk because MAVEN's initial orbit takes it much farther away from Mars than its final orbit will. These pictures were taken from 36,500 kilometers away; MAVEN's orbit will eventually be one that takes it only 6000 kilometers from the surface. Ordinarily that might mean you'd get images with six times better resolution, but MAVEN IUVS team leader Nick Schneider explained to me that that's not the case. "We don’t need [higher resolution], because there’s not that much fine detail in the atmosphere, and other imagers are better suited to surface images. Plus, we need the data for other modes and other instruments. Right now, we’re hogging most of the data stream as other instruments aren’t deployed at their high data rates."

Anyway, images like these don't really do imaging spectrometers justice. For each spot in the images above, there is a full ultraviolet spectrum from 110 to 340 nanometers, 256 data points on the ultraviolet "color" of each spot. Images only hint at the spectral richness of this data set.

Nick explained a little more to me about what we're looking at:

The MAVEN spacecraft has obtained its first observations of the extended upper atmosphere surrounding Mars. LASP's Imaging Ultraviolet Spectrograph (IUVS) instrument obtained these false-color images eight hours after the successful completion of Mars orbit insertion. The image shows the planet from an altitude of 36,500 km in three ultraviolet wavelength bands. Blue shows the ultraviolet light at 121.6nm from the sun scattered from atomic hydrogen gas in an extended cloud that goes to thousands of kilometers above the planet’s surface. Green shows a 130.4nm ultraviolet light that is primarily sunlight scattered by atomic oxygen, showing the smaller oxygen cloud. Red shows ultraviolet sunlight at 180-340nm reflected from the planet’s surface; the bright spot in the lower right is light reflected either from polar ice or clouds. This is the first UV image to simultaneously record emissions from multiple gases in Mars’ atmosphere.

The oxygen gas is held close to the planet by Mars’ gravity, while lighter hydrogen gas is present to higher altitudes and extends past the edges of the image. These gases derive from the breakdown of water and carbon dioxide in Mars’ atmosphere. Over the course of its one-Earth-year primary science mission, MAVEN observations like these will be used to determine the loss rate of hydrogen and oxygen from the Martian atmosphere. These observations will allow us to determine the amount of water that has escaped from the planet over time.

So, so cool that they're seeing what they came to see -- the broad fuzz of hydrogen, which Mars can barely hang on to, above the thicker air of oxygen and water ice. Yay for MAVEN science!

Whew. So glad to see first light from them, Mars is hard ! Kinda surprised to see more equatorial than polar emmisions tho, I know the magnetic field is barely there, but on Earth, we still spiral most of our aerosols to the poles. So, bottom right reflection might also be auroral, with the bit that is escaping there interacting in a energetic fashion ?