Today I received an email notification of new public releases of some image data sets. I always love seeing new public space image data, but this notification was bittersweet: it included the first public release of the very last image data returned to Earth by Deep Impact. Early last year, Deep Impact began a campaign to observe comet ISON. (Remember ISON?) In fact, Deep Impact was the first spacecraft to observe ISON, though the comet was more than 5 AU away from the spacecraft at the time. They took data throughout the first half of 2013, and were slowly returning it to Earth when a computer bug ended the mission.

The last images returned to Earth had been taken in March 2013. The photo below includes data from 96 of those images. It may not look very impressive, but the comet was still nearly 4 AU away at the time that these photos were taken. The long streaks in the background are stars; the small dots are from hot pixels on the camera detector. 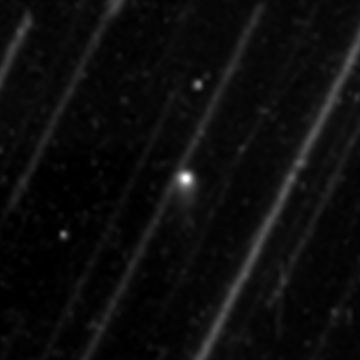 This image of comet ISON is a stack of 96 photos taken with Deep Impact's Medium Resolution Imager on March 9 and 10, 2013. The image is enlarged from the original resolution by a factor of 4. The comet was about 3.9 AU from Deep Impact at the time. These are the last images that Deep Impact returned to Earth before failing in August 2013.

So long and thanks for all the data, Deep Impact!