Rosetta is in the final stage of its approach to comet 67P Churyumov-Gerasimenko. Yesterday, the spacecraft successfully performed the first of ten burns it needs to match velocity with the comet. The first eight burns are scheduled for Wednesdays -- every other week for two months, then every week thereafter -- and will accomplish a total velocity change of 767 meters per second. The first, completed yesterday, was a small one, only 20 meters per second. The next two burns are much larger, close to 300 meters per second. Here is the schedule for the upcoming burns, according to the Rosetta blog:

Note: last night the ESA Operations Twitter feed mentioned that all looked good with 15 meters per second of the burn complete. This confused several people, including me, who wondered why it was 15 and not the stated 20. So I checked this morning and Daniel Scuka told me that the tweet had been while the burn was still in progress, and that they did accomplish the whole 20 meters per second as planned.

Two more burns will happen after the ones in this list, according to the Rosetta blog: "one on 3 August, which should bend Rosetta's trajectory from a 200-km miss distance to 70 km and reduce the rel-v to a stately 1 m/second, and one on 6 August, which is the orbit insertion manoeuvre itself."

It's hard to believe that Rosetta is almost there, after so long. I'm looking forward to more images of the comet! 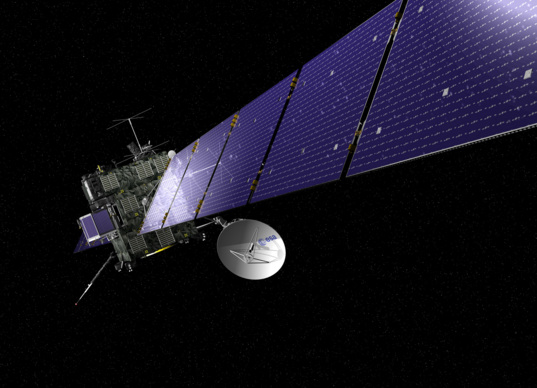 Artist view of ESA's Rosetta cometary probe. The spacecraft is covered with dark thermal insulation in order to keep its warmth while venturing into the coldness of the outer Solar System, beyond Mars orbit.

Is it true that the comet is chasing rosetta, not the other way around?