Rosetta is doing the spacecraft equivalent of yawning and stretching after its long sleep, and last week the spacecraft rubbed its proverbial eyes and blinked a few times, squinting at its distant target. Comet Churyumov-Gerasimenko is still five million kilometers away and less than a pixel across to even Rosetta's highest-resolution cameras. Still: there it is! 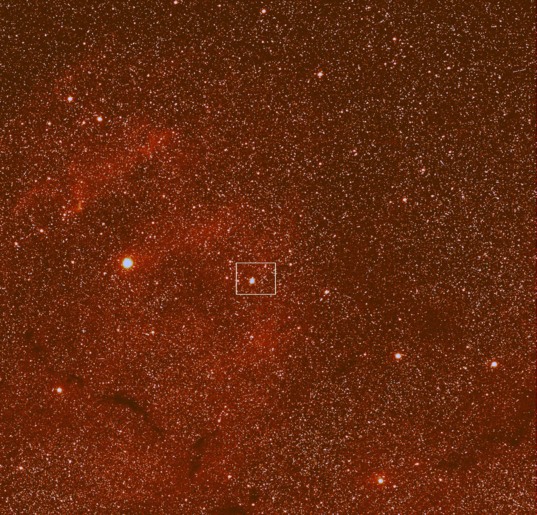 Shortly after waking from its long hibernation, Rosetta pointed its cameras at its comet target for the first time on March 20, 2014. The star-filled Wide-Angle Camera image contains comet 67P/Churymov-Gerasimenko in the constellation of Ophiuchus. It shows a wide field 25 times larger than the diameter of the full moon. The color composite shows a background of hydrogen gas and dust clouds. The white box indicates the position of the close-up taken with the Narrow Angle Camera, with the comet appearing towards the top of this box, close to the bright globular star cluster M107. The image was taken from a distance of about 5 million kilometers to the comet.

No, it's not the bright smudge in the picture; that's a globular star cluster, M107. Here's a Narrow-Angle Camera view, corresponding to the rectangle in the middle: 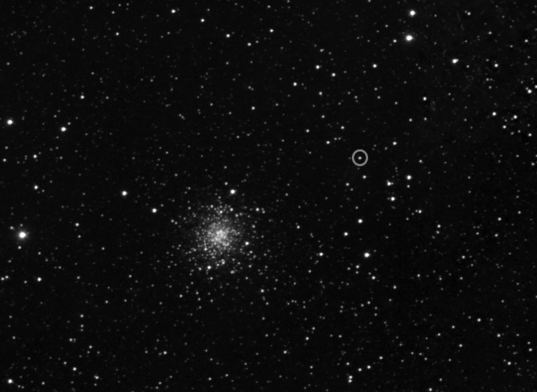 Comet 67P/Churymov-Gerasimenko in the constellation Ophiuchus. This image was taken on March 21, 2014 by the OSIRIS Narrow Angle Camera. The comet is indicated by the small circle next to the bright globular star cluster M107. The image was taken from a distance of about 5 million kilometers to the comet.

Just a dot! But a very important dot. Unlike all the other dots in the image, this one will grow and grow over the coming months.

What's going on with Rosetta right now? The cameras -- more formally known as the OSIRIS instrument -- are just two of a great many individual instruments being turned on and put through their paces this month. One of the most important events comes tomorrow, according to a tweet from ESA Operations this morning:

Command to wake lander @Philae2014 was sent last week, will be executed on board @ESA_Rosetta tomorrow at 07:00CET pic.twitter.com/0ugGMYHRdL

One note about the image above: it's not actually Rosetta's first image of the comet, just the first one since hibernation. Rosetta took its first image before entering hibernation, two years ago yesterday.

For more details about Rosetta's wakeup and rendezvous plans, see my last blog entry on that, and to follow the details of the commissioning phase, read the Rosetta blog.

The house is empty, all people from the Rosetta Lander left today for Cologne. I wait for the first results tomorrow. One question to the people with more orientation in the solar system. You see the comet near M107 (Ophiuchus) in the images of OSIRIS, but from earth it is located in sagittarius. Where is Rosetta now?

Rosetta is now some 651 Mkm from earth but only 5 Mkm from the comet. So seen from earth it has to be close to the comet. And indeed HORIZONs tracking data tell it is somewhere between Aquila and Sagittarius.