India's Mars Orbiter Mission is still in Earth orbit, preparing to depart for Mars with a long rocket burn on November 30. The mission's scientists and engineers are taking advantage of the "layover" in Earth orbit by switching on and commissioning the instruments. Here, for your enjoyment, is the first image of Earth taken by the mission's Mars Colour Camera. It's so fitting that it's a look toward the mission's birthplace -- the Indian subcontinent. 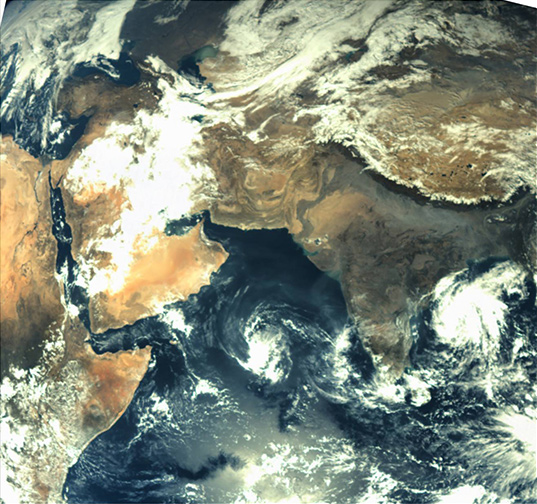 On November 19, 2013, from a 70,000 kilometers above Earth, the Mars Orbiter Mission took this photo of the Indian subcontinent.

I can't imagine what it feels like to have built and tested and then launched a scientific instrument and then seen an image taken from space for the first time. Congratulations to the Mars Orbiter Mission and to the Mars Colour Camera team!

This photo was taken from a distance similar to Mars Orbiter Mission's eventual apoapsis altitude, so it should compare well to the kinds of pictures that the Mars Colour Camera will get of Mars. It shows roughly 60 degrees of latitude -- a picture taken from a similar distance at Mars would show most of the planet. Those photos are going to be super.

The photo was shared on Facebook today, and I believe it has been downsized from the original, so better is yet to come. The Mars Colour Camera has a 2000-pixel-square detector, but this image is only about 1400 pixels across. The caption released with the photo speaks of 3.5-kilometer-per-pixel resolution, but I think (based on comparing landmarks to Google Maps) that the image is actually closer to 5 kilometers per pixel. I also notice that two corners have little white triangles in them that make it appear that the photo has been rotated in order to put north up, and then cropped to make it square. I'm going to try to find out more about this photo and any further photos that appear on Facebook over the next weeks -- I'll let you know what I learn!

Meanwhile, the mission is gearing up toward its November 30 departure. (Articles speak of a December 1 departure, but that will be India time, and most of Mars Orbiter Mission's events have been early in the Indian day, so I am planning on looking for departure activities on November 30 in my time zone.) Here is a very detailed newspaper article with an interview of ISRO chairman K. Radhakrishnan, explaining the next steps for the Mars Orbiter Mission. It will take a 22-minute burn of the main rocket engine to send the spacecraft on its way to Mars.

Thanks to Pradeep Mohandas for the link to that story, and the tip about the Earth photo!

Great picture! And good work by ISRO. The mass of clouds swirling in the Bay of Bengal off the east coast of India is Cyclone Helen, which is expected to make landfall on 21 November around 6 pm IST (1230 UTC) on the southern coast of Andhra Pradesh - very close to Sriharikota from where the MOM was launched aboard the PSLV C25.

If you see carefully on the upper left corner there is a portion of the edge of the earth so this picture is a truncated portion of probably the full picture.

I would really love to know the orbital mechanical reason why this thing is hanging out in orbit and doing all these burns, whereas Maven just immediately took off on its Hohmann transfer. I've read all these vague and probably erroneous explanations, e.g., "It doesn't have enough fuel so it's gaining speed so it can slingshot out," but I'd like to hear a real answer. Why is in such a highly elliptical orbit? It doesn't seem to confer any advantage into getting to escape velocity. And does anybody know if this probe travels along the ecliptic, and if not, where the inclination change takes place? The link in the blog didn't seem to address this.

Hi Kevin, ISRO currently only has one launch vehicle that is tried and tested: The PSLV. They are currently getting ready to test the next generation launch vehicle: The GSLV. PSLV is a smaller launch vehicle hence cannot put the Mars Orbiter Mission spacecraft directly on a trajectory to planet Mars. Hence they have to rely on this slingshot technique by using earths gravity to accelerate the spacecraft and give it enough velocity to leave earth orbit on its way to planet Mars. GSLV was supposed to be ready by now but the program has had quite a few delays especially due to the indigenously built cryogenic engine. Next month they are going to try again...so fingers crossed. atsidhu

Because so many people were asking me this question, I wrote a blog entry about it: Why are MAVEN and Mars Orbiter Mission taking such different paths to Mars? http://www.planetary.org/blogs/emily-lakdawalla/2013/11220947-maven-mom-trajectory-explainer.html

Congratulations to India's space program! I hope that during my lifetime I get to see a joint manned mission to Mars by ALL of Earth's Space Agencies.