The Planetary Geomorphology Working Group of the International Association of Geomorphologists has a nice monthly web feature titled, appropriately, "Planetary Geomorphology Image of the Month." Each month, a different scientist writes a brief, illustrated, referenced post about a different feature found on the surface of an extraterrestrial world. (This is one of those situations where "planetary" refers to all bodies in the solar system large enough to have interesting geology.) This month's feature, written by researcher Joe Levy, compares water tracks on Earth and Mars. Because the intended audience is other scientists, the text can sometimes be a little challenging for laypeople, so I've edited Levy's text below to make it accessible to non-geomorphologists.

Adapted from this article by Joe Levy

Water tracks are found in regions where much of the ground stays frozen all year. Each summer, a little bit of the frozen ground thaws, generating meltwater and unlocking pore spaces in the soil. More water may come from snowmelt and even from salt deliquescence (that's where salts in the ground effectively pull moisture out of the air). Although water does not pool at the surface, it may "pool" underground because it can't penetrate into the still-frozen layer of permafrost below the seasonally melted level; water collects at local lows in the ice table. Where there is a slope in the ice table, groundwater may run downslope. Capillary action pulls some of the water to the surface, and where that happens, you get a local darkening of the ground. That's a water track. They darken and lengthen during the summer melt season. They freeze-dry in winter, rendering them nearly undetectable from late fall to early spring. 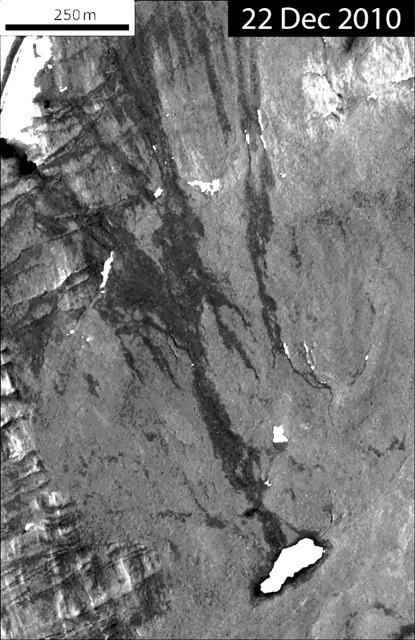 Although Antarctic water tracks usually don't have branches, they can form dendritic drainage networks on permafrost hill slopes. Water tracks are typically a few meters wide and range in length from a few tens of meters to several kilometers, depending on the volume of water available for transport and local hill slope topography. At breaks in slope, water track fluids (water or brine) may actually reach the surface, creating groundwater seeps. If the water track fluid is briny, its evaporation at the surface can leave behind flowery fringes of bright salt crystals around the edge of the flow feature.

Water tracks have been shown to occupy the same broad channels for up to a century. As a result, water tracks are locations where chemical weathering is most active in the polar desert, and are hotspots for biological activity in the Antarctic soil environment.

Are there water tracks on Mars? There is a feature on Mars called recurring slope lineae (often abbreviated RSL) that look similar and are similarly seasonal. They are narrow (0.5-5 m wide), relatively dark-toned features that form on steep (25-40˚), southern-hemisphere slopes, and that appear in early spring, grow longer in the downslope direction during spring and summer, and fade during autumn and winter—behavior identical to water tracks on Earth. 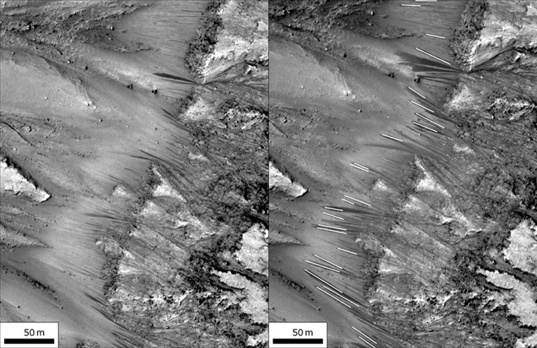 (Because I can't stand including a HiRISE image without showing it at full resolution color glory, here's a wider view of the same area, in color, taken from the right-hand observation.) 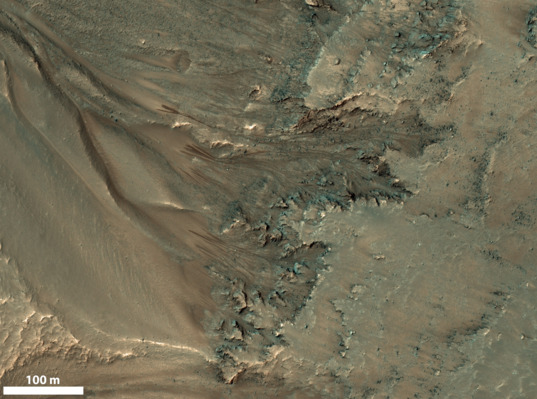 Scientists have proposed several hypotheses to explain the behavior of Mars' recurring slope lineae. Because the lineae occur only in the southern hemisphere, on slopes that have warm summer temperatures (where "warm" is above 250 kelvins, or minus 20 Celsius), and because they grow in summer and fade in winter, many scientists favor the interpretation that they happen where water and/or brine percolates and flows just below the surface. And that in winter, the fluid evaporates or freezes, then submlimates. If these inferences are true, recurring slope lineae are the first direct evidence of water-based liquids flowing in the near-surface environment of modern Mars.

So if these are made by briny water, and the water evaporates, where are the salt deposits? One would think that after many years of this, there would be some sort of visible crust. Even is most of the water is just below the surface, one would think it would break the surface, at least in places.

Layman here, but I can think of two mechanisms where one would delay salt visibility and one can entirely suppress it: - Deposits makes the drainage channel move. - Wind may deposit fines faster than the salt deposits grow.

Layman here also. If it were the first then there would be some topological relief, some build up over time. I would expect something like a river delta look at the ends where the stream deposits. If it were the second, I would still expect some build up of material over the salt plus sand deposits. I don't see any hint of relief like that in the images. They look more to me like dust devil tracks, just straighter. Perhaps it is like in the mountains where there can be a sudden river of air flowing down slope blowing stuff around you, yet 50 meters to the left or right, the trees are motionless. I could see some sort of a temperature inversion keeping colder air on the landscape around until is finally punches through and down into the crater in a gust,