Is Opportunity near Lunokhod's distance record? Not as close as we used to think!

A few weeks ago, a press release from the Opportunity mission celebrated Opportunity's surpassing of the previous NASA off-world driving record. That record was set in December 1972 by the Apollo 17 astronauts aboard their Lunar Roving Vehicle. Their odometer read 35.744 kilometers at the end of their mission; Opportunity's odometer read 35.760 kilometers at the time, but (as of this moment) she's already rolled another kilometer-plus, to 36.84 kilometers. So it seems she's creeping up on the longest record of them all, the one set by Lunokhod 2. Wikipedia (and numerous other sources) will tell you that Lunokhod 2's distance record is 37 kilometers.

But don't declare Opportunity a champion too soon. The Lunokhod distance measurement was based upon wheel rotations and a map of Lunokhod's progress made with relatively low-resolution images. And any off-world rover driver worth her salt will tell you that wheel slippage and other factors make it very difficult to estimate how wheel rotations translate into actual distance traveled. And any space mapper will tell you that it can be terribly hard to determine the correspondence between craters and hills seen from the ground and seen from space.

Now that we have actual photos of hardware and wheel tracks from Lunar Reconnaissance Orbiter, Russian scientists are re-mapping the Lunokhod traverses and finding quite different numbers, about 42 kilometers in the case of Lunokhod 2! Opportunity has a long way to drive to beat that record. And while Opportunity could theoretically achieve 42 kilometers, now that she's reached the rim of Endeavour she doesn't need to cover such long distances anymore. She may well get to the magic number 42, but she's not in any hurry to do so.

Alexandra Witze has a great article at nature.com about the revised Lunokhod distance, with interviews of Sasha Basilevsky (who worked on Lunokhod) and Phil Stooke (planetary cartographer extraordinaire). It's not paywalled, so go check it out! See also my earlier story on the Lunar Reconnaissance Orbiter images of Lunokhod 2 and Lunokhod 1. 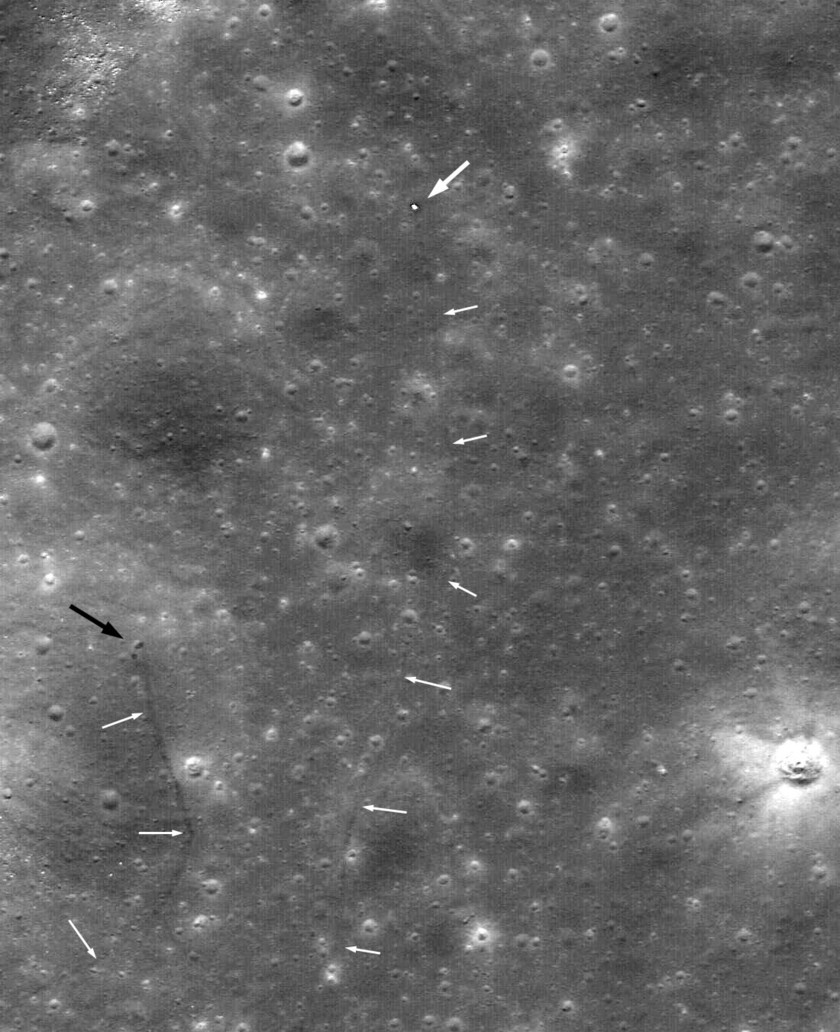 The final resting place of Lunokhod 2

Lunokhod 2 roved 42 kilometers across the Moon over five lunar days (Earth months) in 1973. This image, taken by Lunar Reconnaissance Orbiter's high-resolution camera, shows the final resting place of Lunokod 2, as well as the crater that caused its death.

If 37km was based on wheel rotations, and if there was slippage, then the distance would actually be shorter than 37km? Mapping seems the best way to determine distance, except for the fractal factor...if you count the distance of every grain of sand that was disturbed!

37km was based on wheel rotations, but they obviously would have known about and tried to account for slippage when coming up with that number. The actual raw rotation count * wheel circumference would have been higher (than even 42km) but that number doesn't mean much without taking into account the error. They just overestimated the amount of slippage.

looking through the library at Arizona State University in the 1980s I came across a photo in a nonfiction book which showed a photo og two astronauts on the moon showing the Lunokhod tracks disappearing in the distance on the moon beside them. The tracks looked tank like but you never never see that photo outside the library ???

@gmvoeth, it can't have been Lunokhod tracks. Perhaps it was the tracks from the LRV (http://nssdc.gsfc.nasa.gov/planetary/lunar/apollo_lrv.html )?