Lunokhod found on the Moon -- and on Earth, too

Yesterday I posted a bit of a Lunar Reconnaissance Orbiter camera image showing the tracks of the Russian Lunokhod 2 rover. Today, I can post for you an image showing the rover's final resting place: the patch of bright pixels near the top of the annotated image below. 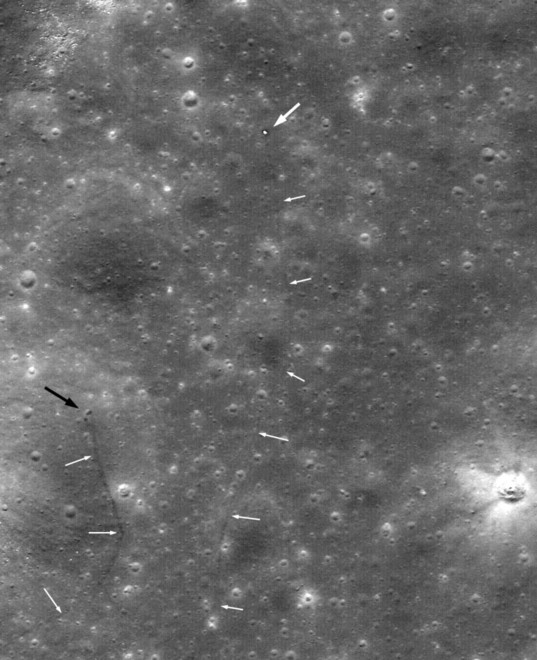 The final resting place of Lunokhod 2

Lunokhod 2 roved 42 kilometers across the Moon over five lunar days (Earth months) in 1973. This image, taken by Lunar Reconnaissance Orbiter's high-resolution camera, shows the final resting place of Lunokod 2, as well as the crater that caused its death.

There's an interesting story in the discovery of Lunokhod 2 in this image. Yesterday, planetary cartographer Phil Stooke posted an item to unmannedspaceflight.com pointing out what he thought was the final location, a dark patch of pixels on the image above, near the black arrow. But this morning, I had an email in my inbox from Sasha Basilevsky, addressed to Phil, titled "Close, but not the place." Sasha wrote: "I think you indicated not the Lunokhod 2 but the crater in which Lunokhod [accidentally] got in and, maneuvering in which, it put soil on the solar battery panel. That later resulted in pollution of thermal radiator with that soil and overheating and death of Lunokhod 2 next day. Look at the attached image. The position of Lunokhod 2 (big white arrow) was determined by Sergei Gerasimenko, Kharkov University. Black arrow shows that damned crater. Small white arrows show the Lunokhod tracks."

I didn't know this part of Lunokhod 2's story, but fortunately Phil Stooke related it in the International Atlas of Lunar Exploration (p. 357): "Near the end of the lunar day, driving northeast away from the Sun with poor visibility, Lunokhod 2 was accidentally driven into a small crater (Chaikin 2004). As it maneuvered to climb out, the open lid protruding behind the body of the rover struck the crater wall and its solar cells were partly covered with soil. A drop in power was noted, though this was not itself a serious problem. Unfortunately, when the lid was closed to help keep the rover warm during the lunar night, the soil was dumped on thermal radiators intended to cool the rover during the day....Lunokhod 2 was roused on 8 May and driven for two more days towards the hill called Far Cape, but it overheated and died a few days into the fifth lunar day. Before operations ceased it was oriented so its laser reflector could be used in future. It was still being used in 2005."

A few readers who have paid much closer attention to Russian exploration of the Moon may note what appears to be an error in the above. Apparently, it is commonly -- and erroneously -- reported that Lunokhod 1's retroreflector was the one that was still functioning as of 2005. In fact, it was Lunokhod 2's. Phil has not, as yet, located Lunokhod 1 in the LROC data set, but I can assure you he's trying!

A final note on Lunokhod. While I was at the Lunar and Planetary Science Conference, this distressing image appeared on a Russian-language blog: 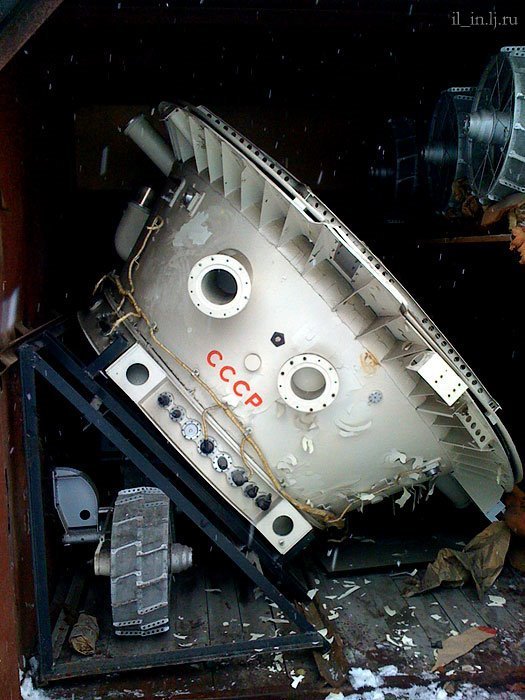 Lunokhod model in a storage crate

It's clearly a Lunokhod, perhaps an engineering model, but it looks in sad shape. What are the circumstances of this photo? The text on the blog seemed to indicate that this rover had been "found in a container on the courtyard of the Institute for Space Studies," or IKI, among a pile of other containers, of which the contents were unknown.

While reading this I happened to see Misha Ivanov walk by, so I grabbed him and pointed him to the original Russian text. He grabbed Sasha, and they both conversed and shook their heads and then Sasha told me to send him the link and he'd get a real answer as to what this was. A couple of days later, Sasha wrote to tell me that "Lev Zelenyi, Director of IKI, says that they brought these things a month ago from the Exhibition Center of the Russian Academy and now are working on placing them in the IKI Exhibition Center. So situation is not as tragic as one could think and obviously going to the best." And a couple of days later, he forwarded more information from Sasha Zakharov of IKI: "As I know Vystavochnyi center RAN delivered to IKI in the last week some models of spacecraft (including model of Lunokhod) for the IKI exhibition. The IKI workshop is working now to renew these models for the exhibition."

I've never been to IKI -- I hope to go someday, and see this restored model of the trailblazing Lunokod rovers in person! As Lou Friedman commented on my earlier post, "I can truthfully estimate that 90% of the SPACE-KNOWLEDGEABLE (!) people I talk to either forgot or never knew of the old Soviet lunar accomplishments. They were lost in the glare of Apollo. To this day the Russians are the only ones who have ever conducted an automated sample return from the surface of another world. For 25 years the Lunokhods were the only automated planetary rovers ever flown. I have been very fortunate to see the duplicate models of these vehicles in the wonderful (but largely hidden) museum of the Lavochkin Museum near Moscow. It is a testimony to a golden age -- not of politics, but of ambition and can-doism. These pictures are also fantastic testimony to the NASA Lunar Reconnaissance Orbiter and its camera -- nice going to all involved in the picture taking and picture processing.