I post these pictures for no other reason than they're cool. Here's a photo of the recent Cumberland drill hole, taken after dark by the MAHLI camera on the end of Curiosity's arm. Note the line of scorched dots down the back wall of the drill hole -- those are Chemcam shot points. Pew pew pew! 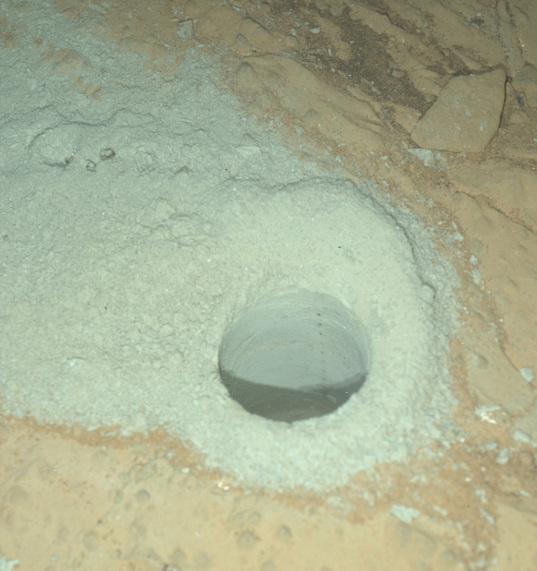 MAHLI can take photos like this after dark because it's equipped with a set of LEDs. Here they are, blinking on and off in a test during Curiosity's first use of the arm:

But this sol 292 observation gets cooler, because they used Mastcam to shoot a photo of MAHLI illuminating the ground at night. The Mastcam photos have a lot of speckle noise because the cameras really weren't intended to be used under such weak illumination conditions; they had to do a long exposure, I'm sure. I did some work on this image to reduce the noise, though I had to be careful because one of the wonderful things about this photo is the shadows thrown by the little spheroidal nodules protruding from the otherwise flat surface of the rock, and my despeckling filters wanted to get rid of those shadows, too. 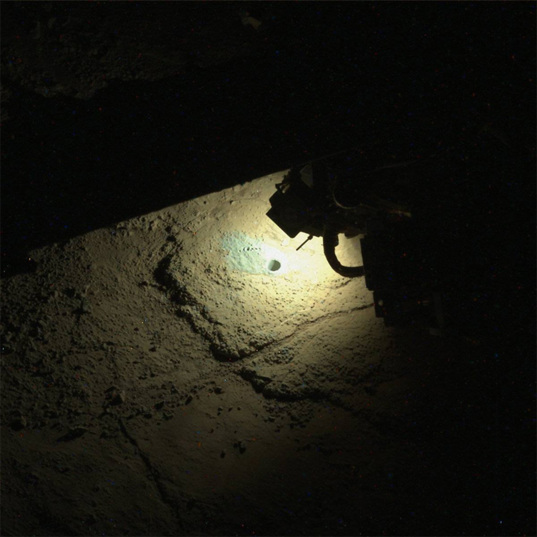 On sol 292 (June 2, 2013), Curiosity performed some nighttime MAHLI close-up imaging of the drill hole at Cumberland. The scene is illuminated only by the light-emitting diodes (LEDs) next to the MAHLI optics.

A very creative member of the public figured out he could use the various MAHLI images of the inside of the Cumberland drill hole to produce an "unwrapped" view of the walls of the hole. This is actually something geologists do with boreholes all the time; they map rock contacts and veins and figure out which way they're tilted. It's unlikely that the unwrapping below is geometrically perfect but it is a mighty cool view into our little drillhole on Mars.

The interior of the drill hole at Cumberland, seen by Opportunity using MAHLI nighttime imaging on sol 292 (June 2, 2013). Originally posted at unmannedspaceflight.com.

Definitely cool images. Has or is Curiosity going to take a panarama shot of the night sky? It would be nice, aka cool, to see the stars from there if the camera is capable of doing so. (forgot) A sky without light pollution is so cool.

Near the top border of the sol 165 MAHLI image http://mars.jpl.nasa.gov/msl-raw-images/msss/00165/mhli/0165MH0199003000C0_DXXX.jpg a little right of the center, you may notice a faint bluish diagonal line. That's how stars look like on MAHLI images.