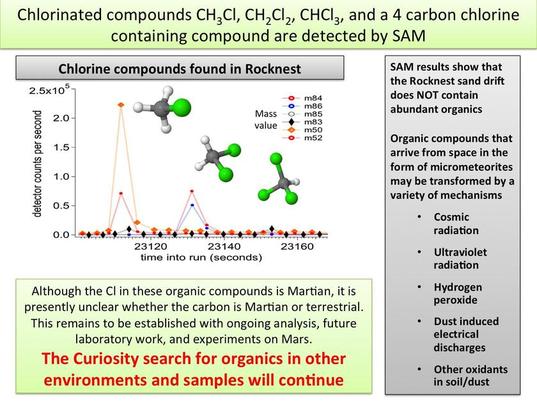 The first examinations of Martian soil by the Sample Analysis at Mars instrument show no definitive detection of Martian organic molecules at this point. The instrument did detect simple chlorinated carbon compounds, represented by ball and stick models on the graph.

Science takes time and patience is not a virtue of the general public. I remember reporters asking how many earth like planets Kepler found only months after commissioning! They obviously didn't understand that it takes at least one year to get an initial result and several more years for confirmation. Similarly the public is anxiously awaiting the news from Curiosity of some form of life on Mars, either past or present (even if it is not a mission objective). We've become an instant gratification society which loses interest quickly. NASA needs to do a better job at making projects exciting and keeping them exciting if they expect continued public support. I don't believe another Mars rover will do that unless it is coupled with a sample return objective.

I have several comments on the hangout. 1) Emily mentioned (@43:50) one reason why a rover to Europa might not be a good idea: its terrain. Another reason would be the hazardous radiation environment which bathes Europa. That radiation is presumably the reason the estimated lifespan of the proposed Europa orbiter, once it actually reaches a Europan orbiter, is about a month. To have a rover last longer than that would probably mean armouring it like a tank, which in turn may impair its mobility! 2) Casey's comment (52:41)--concerning the cost of planetary exploration--that "we can do all of this very cheaply by government standards" begs the question as to which government standards he was referring to? If the US government spent $2.5 billion dollars on a single piece of (say) military hardware most people would reasonably expect something the size of a largish aircraft carrier, not a thing more the size of a Volkswagon Beetle! 3) During the hangout Society members and their supporters were urged to lobby Congress and the Administration to reverse those draconian budget cuts. While I too support such an move, in one way such calls were kind of weird. As Emily pointed out during the hangout: (48:15), the Planetary Society is an international organisation. That means it has a membership composed of non-Americans as well as Americans. In addition, the hangout, being on the Internet, has an international audience. Yet when Casey (@31:40) urged the Society's members and supporters to lobby "their Congress people" it was as if the Society was purely an American organisation and the hangout had no non-Americans in the audience. For only those people who happen to be American citizens have members of the United States Congress they COULD lobby. For everybody else the appeal was irrelevant. Even if those of us who were not American did send in letters etc, at best we could expect to have them ignored. At worst, having a bunch of non-voters lobby U.S. politicians would have the potential to dilute the impact on Congress and the Administration of the Society's campaign, especially if more non-Americans send in appeals as a result than US citizens. That's one aspect. Another is that such an Americo--centric appeal given out to the Society's members and supporters without any acknowledgement of the international nature of the Society and the audience tended to convey the impression that, for all its claims to be an "international organisation", the Planetary Society regards itself, on the current budget issue at least, as a purely American organisation. (And indeed it seems fair to ask how much lobbying the Society does in other countries to increase their planetary science budgets?) 4) At 33:30, Casey referred to what I presume to be the Decadal report when he seemed to suggest concerning the Mars Sample Return mission that the authors of that report had priced a single-missions MSR a $5 billion. I would be curious to know where in the report that figure can be found. AFAIK the committee only did a cost analysis of the rover mission element, which they priced at $3.5 billion. Given that each of the MSR's three component missions seems to be of flagship class, such a price tag for just one suggests that the full 3-mission version (especially if you factor in the cost of the technical development required for the second and third mission) could exceed $8-9 billion. Even with a single Earth launch vehicle and using the committee's recommended cap for the rover of $2.5 billion, $5 billion sounds like a highly optimistic estimate. 5) Concerning Casey's answer to the hangout question about MSR (@32:38) about whether an MSR "should be accomplished before a human mission" to Mars, the answer he (arguably) SHOULD have given is that an MSR is what you do when there ARE no human missions in the pipeline. For had NASA been given the go-ahead for human missions to Mars no one would be seriously arguing for a single multibillion dollar unmanned mission to bring back a few grams of Martian material when there would shortly be human missions going which would bring back kilograms--any more than NASA bothered sending lunar sample returns once it got the go-ahead for Apollo.

@Stephen: 1) Yes! Radiation is a major problem. I'm not sure how far they've pursued solutions to this in the Europa mission concept group. 2) I consider Planetary Science cheap because it's approximately 0.04% of the federal budget each year, which is for the entire program. Curiosity, while totaling around $2.5 billion, spread that cost out over eight years, this type of spending makes bigger missions possible but dramatically reduces their cadence. 3) Thank you for calling me out on my U.S.-centrism. I've been so focused on reversing cuts for NASA's planetary program that my views get a little myopic on the issue. We are an international organization, and there is work that needs to be done regarding ESA, CSA, JAXA, and Roscosmos as well. I'll try better to represent our international membership. 4) The MSR concept was revamped in the Mars Program Planning Group, and the ideas for cheaper missions are presented here: http://www.nasa.gov/pdf/691580main_MPPG-Integrated-v13i-Summary%20Report-9-25-12.pdf It's hard to figure out the exact costs of all of these, since they basically put forward five different pathways for sample return. $5 billion is feasible given the reduced scope of the missions proposed therein. 5) Agreed!