Post for Sandra Boynton: An apology for, and explanation of, my crescent-Moon pedantry

For my regular readers: this post does get around to space eventually. Bear with me.

A recent tweet by @AlYankovic tipped me to the fact that the children's book author, songwriter, and illustrator Sandra Boynton recently established a presence on Twitter. As I'm a huge fan of her oeuvre, I immediately followed her. Most of her Tweets are funny one-liners, often accompanied by drawings, but the other day she tweeted the following:

2012. The 30th consecutive year of irked parents asking me why, in The Going to Bed Book, the animals exercise before bed. Hey, it was 1982.

The Going to Bed Book, by Sandra Boynton

The Going to Bed Book is one I know well; owing to its popularity with my kids it's one of four of Boynton's board books that I can recite from memory (the other three being Opposites, Moo Baa La La La, and But Not the Hippopotamus). The book features a boat full of animals doing various things to get ready for bedtime. The line Boynton was referring to has, in fact, always irked my husband, though I enjoyed its silliness. It goes:

And when the moon is on the rise,
hey all go up to exercise!

Now, I'm not bothered by the "exercise" bit; unexpected words like that are one thing that make Boynton's books fun to read aloud. But the "moon is on the rise" bit punches one of my buttons (more on that below). So I tweeted in response:

@SandyBoynton The pre-bed exercising bugged my husband. Me, I was bugged by rise of a *crescent* moon at nightfall.

(Honestly, I didn't even expect her to notice the Tweet, much less respond, so it was a surprise last night when she remarked in a tweet (since deleted) addressing the people who talked about the scientific inaccuracy of the crescent moon at night, saying that she was looking at a crescent moon at night right now.

I immediately felt bad because here I am commenting to one of my favorite kids' authors about the phase of the Moon presented in a book that, after all, features animals wearing pajamas on a boat. That kind of pedantry drives me nuts when I'm on the receiving end (which happens a lot). So, to Ms. Boynton: I'm sorry for my pedantic remark! And thank you for writing and illustrating so many books that have enriched my family's lives.

Having said that, I do want to explain why this is a button of mine, why I am bothered by incorrect representations of lunar phases even in silly children's books.

Children are natural scientists. They are constantly learning through observation, seeing things out there in the world and constructing an understanding of how everything works. The Moon is something that they notice; "Moon" was one of my older daughter Anahita's earliest words (something I've written about before). Typically, when my kids notice the Moon, it's bright daylight, because we're not often out after dark. From babyhood Anahita and Sanaya learned by assembling the evidence they've seen with their own eyes that the Moon is there in the day and there at night too, but it's in different places and appears different shapes on different days.

Anahita knew this, yet somewhere in her third year she learned from book after book that the Moon is a nighttime object, the complement to the Sun, the yin to the Sun's yang, rising in any of its possible phases when the Sun sets. This, of course, is wrong, and directly contradicts the evidence she's seen with her own eyes, but it's what she was taught, so it's what she learned.

And that's such a shame because one of the wonderful things about naked-eye astronomy is that it's not messy like so many of the processes on Earth; things that move in the sky have a rhythmic, cyclic, deterministic motion. A motion that allows budding scientists to go from observations into predictions. In other words, when we look at the sky one day, we can actually tell the future, and predict what's going to happen the next day, at least in terms of the positions of the Moon, planets, and stars. In so much of science we're forced to tell kids about how things would work, assuming they were spherical and in a vacuum; but the Moon and planets are spherical and in a vacuum, so they actually do work in very predictable ways, in patterns that even a young child can notice. By noticing the patterns in the Moon's motions and phases, young children can begin to understand how there are rules that run the universe, and that we can learn what those rules are through observation.

Anahita and I walk to kindergarten at the same time every day. When the Moon is in its waning gibbous phase we notice it every morning at the same time, setting on the western horizon. But each morning, it's never where we noticed it yesterday. Each morning, we can rely on it to be a little bit higher, and a little less fat. On our northwestward walk we always have to look a little to the right and a little more up from its previous position to see it each day. By last quarter we often no longer notice it, now above and behind us as we walk, and we usually forget to look for it in the rush to get to school (although baby sister, looking around at the world from her stroller, does sometimes point it out to us). Then, three weeks later, we're pleased to spot Aunty Moon wearing her gibbous phase again, come back to greet us every morning, and the cycle repeats. 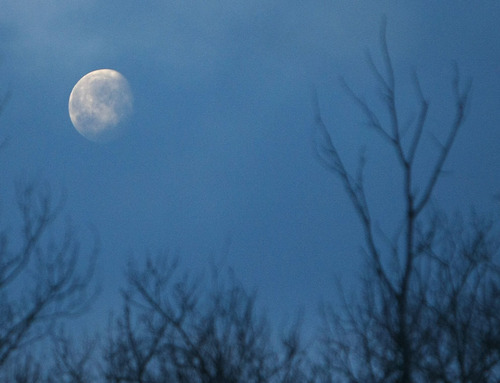 The Moon on the morning of February 10, 2009, around 7 o'clock. From a blog entry by Astro Bob, who was also surprised to notice it then.

Anahita's not old enough to get the geometry of it all yet, how the relative positions of Sun and Moon and Earth create the lunar phases. But I can point out to her that a crescent Moon is always close to the Sun in the sky, that we most often notice it right after sunset, when the Moon's about to set, or right before sunrise, when the crescent Moon will soon be washed out by the Sun's brilliance. And I've pointed out to her how when the Moon's a crescent you can easily see its night side, that the Moon is actually always a circle, that when it appears to have different phases it's just that some parts are lit up and some parts are not. When she's a little older she'll be able to put together how the Moon's a crescent when it's close to the Sun in the sky and it's fat when it's far from the Sun and see how that makes sense if the Moon is a sphere.

It's such an accessible thing, so amenable to childhood observation and inference. So that's why it bugs me so much when children's books teach us that the Moon's only up at night, and that it can rise and set at any old time in any phase.

And for those of you pedants out there who will no doubt remark that the Moon and Sun don't actually rise and set, that it's Earth's rotation that make their motions: that's not what my kids see with their eyes. One day, that fact will suddenly snap into focus for them, and they'll feel a sense of vertigo as they realize they're tiny things on a great big sphere that's spinning fast and circling the Sun even faster and holy cow the Sun's moving too as our galaxy spins but it's just one of uncountable galaxies and there is no center of the universe and the cosmos is breathtaking in its vastness. Do you remember making that discovery? They haven't made it yet. They still think that they're each at the center of the universe. When they discover that they're not, it'll be a poignant moment, because they'll be on their way to not being children anymore.