Blast from the past: The Galileo Messenger

It's impossible to avoid a foreboding feeling when reading the early newsletters that came out of the Galileo project. Undoubtedly, Galileo transformed our understanding of Jupiter and especially its moons, revealing Europa and Ganymede to be worlds with liquid oceans worthy of exploration on their own. But it was befallen by one disaster after another, from even before its construction began, through its too-long-cruise, and into its Jupiter mission. Despite all that, Galileo lived longer than it had any right to before finally ending its existence in a fiery plunge into Jupiter's atmosphere on September 22, 2003.

From 1981 to 1997, the Galileo mission published an approximately quarterly newsletter called the Galileo Messenger. It eventually ran to 45 issues, until the end of the Prime Mission, by which time Internet access had become commonplace enough that it made sense to transition the news function to the Web. I have them all now in PDF format thanks to Patrick Wiggins, a NASA/JPL Solar System Ambassador in Utah, who saw my earlier posting of the Voyager Mission Status Bulletins and offered to scan his collection of miscellaneous JPL newsletters for me. As with the Voyager Bulletins, I'm posting the Galileo Messengers in batches when I have the opportunity to read through them. There were 45 issues, and 20 of them were published before Galileo ever got off the ground. That period is the subject of this post. 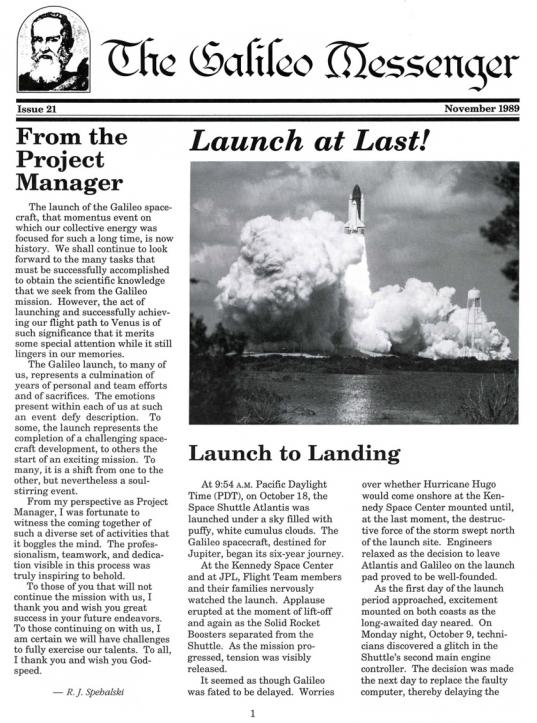 Clearly, the Galileo project had a tortured history even before the first Issue of the Messenger. The first newsletter opens with a message from Project Manager John Casani: "After a flurry of activity during the last three months the Galileo mission has again stabilized. It is important at this juncture that we avoid the tendency to listen to rumors, which will be rampant a few more months, and to concentrate on our specific tasks." It also describes the point of the newsletter:

The Galileo Messenger will be a combined project newspaper and status bulletin. Its purpose is to provide both a summary of the project activities and an informal set of feature articles highlighting specific aspects of the project. We hope that the Messenger will convey not just the facts associated with Galileo, but also something more subjective, an exciting look at the nature of the Galileo endeavor.

The Messenger will be published quarterly, between two weeks and one month after each quarterly review. It will carry several standard features, including a short status-oriented message from the Project Manager, a presentation of one of the Galileo science experiments, and an in-depth discussion of an important (and recent) engineering activity. In each issue there will also be a capsule profile of a key Galileo team member and an explanation of a significant facet in the mission design.

The final standard feature will be Potpourri, a column about the people and activities of the project written in a "stream-of-consciousness" style by Gentry Lee.

In Issue 2, July 1981, Gentry Lee lamented, "After the Voyager encounter with Saturn this summer, there will be a hiatus in our exploration of the solar system ... We have grown accustomed during the last decade to a new unmanned planetary spectacular every year or two ... a new launch, a new planet, a new set of knowledge for our children and grandchildren ... and now it will be at least five years ..." This impending hiatus was one of the things that had inspired the foundation of The Planetary Society less than a year previously.

Casani opened Issue 3 with: "Despite rumors to the contrary, it apparently never was the intent of the Office of Management and Budget (OMB) or the Presidential Science Advisor, Dr. George Keyworth, to cancel the Galileo Project." The same issue announced the change in the baseline mission from a 1984, direct-to-Jupiter launch to a 1985 launch requiring a Venus flyby. Gentry Lee remarks, "...maybe this will be our last significant programmatic change." Sadly -- no. Issue 4 announced a new baseline, including a 1986 launch, with a lengthy essay by Casani explaining the messy history behind this change. Of course, it wouldn't be the last.

They pressed on. By Issue 5 (September, 1982) they were in to integration and testing. Gentry Lee remarks about a renewed energy among the mission team: "...the climate has changed on the Project. As we near the start of system testing, the business of engineering now dominates our discussions. After years of delays and reprogramming replete with anxieties about the very survival of Galileo, it is now clear that we have a project. The job we must do now is the one we all know best -- build the highest quality spacecraft possible within the cost and schedule constraints, and send it to Jupiter to gather for all mankind the secrets of the giant planet and its fascinating moons." Ironically, the same issue included a detailed description and several photos of tests of the deployable antenna, which was eventually to fail to deploy, crippling the mission.Issues 6 to 14 chronicle the orderly progress of integration and testing, both its successes and hiccups. I found the section on Single Event Upsets in Issue 8 interesting -- they identified the risk of bit flips from energetic particle strikes to the attitude control computer as being too extreme, so needed to design a new "rad-hard" processor. This remained a serious concern until Casani reported good progress on the problem in Issue 11, September 1984. Issue 10 included this interesting bit of trivia: "The Galileo mission will be the 24th U.S. space mission since 1961 to be powered partially or totally by nuclear power sources." In Issue 12, Casani reported that NASA had "agreed to add an asteroid option," which would delay the Jupiter arrival date slightly. At the time, the target was 19 Amphitrite. The planned orbital tour was announced in Issue 14, September 1985. Casani also discussed the beginning of the transition from integration and testing to the launch phase of the mission. In fact, Galileo was shipped to Florida in December 1985.

Everything changed in January 1986, and the project was thrown back into the turmoil and uncertainty it had suffered in 1981 and 1982. Issue 15 was published late, in February 1986, after the tragic loss of the Challenger. The necessary interruption to Shuttle launches immediately delayed both Galileo and Ulysses to the next Jupiter launch opportunity, in June 1987. Casani explained that the project planned to store Galileo in Florida in "active storage," permitting continued testing. But by the next newsletter, July 1986, NASA had cancelled the Shuttle/Centaur program, and launch was delayed to December 1989, when Casani remarked that "The design of the new flight path to Jupiter will be a challenging task in light of uncertainty about shuttle lift capability, modifications to the [inertial upper stage] injection module, and potential shielding of the power generators."

The project had found a new path by December 1986. Without the powerful Centaur upper stage, Galileo would now travel to Jupiter on a VEEGA trajectory, flying by Venus once and Earth twice. But it wasn't until Issue 18, April 1987, that Casani could state a launch date for certain (October or November 1989). The new mission plan was very different from the original one. Casani wrote: "The spacecraft sent to the Kennedy Space Center in December 1985 was prepared to be launched from the Shuttle aboard a Centaur, to study the asteroid Amphitrite, and to conduct a two-year mission at Jupiter beginning in 1989. In April 1989, we will send a very different spacecraft back to the Cape for launch. Galileo (now back at JPL) is being reconfigured not only for changes in the mission, but also for changes in the launch vehicle, cruise science opportunities, and mission duration." Thermal issues and the new inertial upper stage were the biggest problems.

I had no idea until reading Issue 19, December 1987 that the low-gain antenna was a late addition to Galileo. It was required for the cruise phase of the mission because the delicate deployable high-gain antenna needed to remain folded behind a protective sunshield while close to the Sun. Without that low-gain antenna, the mission would have been a complete failure.

An 18-month hiatus followed; Issue 20 was not published until August 1989. During that time, Casani moved on, and Dick Spehalski became the new project manager (and author of the newsletters' mission updates). The spacecraft was taken apart, re-tested, re-integrated, and shipped to Florida. Magellan had successfully launched, paving the way for Galileo and then Ulysses to launch from shuttles.

Finally, on October 17, 1989, Galileo departed Earth at last, as reported in Issue 21. Just a day before, a magnitude 7.1 earthquake struck near the Inertial Upper stage control center in Sunnyvale, California, but "The crew recovered as the night progressed and JPL was receiving the required data as launch neared." When Atlantis finally lifted off, Spehalski said, "The emotions present within each of us at such an event defy description."

Watch the launch of Atlantis and deployment of Galileo:

Many on the team were probably wishing that, now that Galileo was finally in space, the mission would leave its tortured past behind. They could have had no inkling of the challenges that the mission had yet to face. But I'll leave the next part of the Galileo story for another day.

Again, I'm very grateful to Patrick Wiggins for scanning these for me!

Galileo was launching toward an incredible multi-planet, multi-asteroid, multi-moon journey. So I'm kind of puzzled about something. At the time of the launch, I was 14, a confirmed science geek, taking honors chemistry, and spending most of my after-school hours outside of volleyball season hanging around in the science wing of my high school. My family watched public television science shows whenever they were on; the TV was almost always tuned to PBS during dinner. But I have absolutely no memory of noting the launches of Magellan, Galileo, or Ulysses. I do have a vague memory of being excited about the Voyager flyby of Neptune, possibly when the images were published in National Geographic or Discover or some other magazine. But the idea of space missions as journeys, as adventures, had not yet been transmitted to me.

These newsletters certainly chronicled that adventure, but they were not directed at the public, at least not initially. They were explicitly for the team and their families, although "other interested parties" could write to JPL to subscribe. Today, NASA and JPL are much better at presenting these missions to the public as the adventures they are, though perhaps at a cost in terms of technical detail. 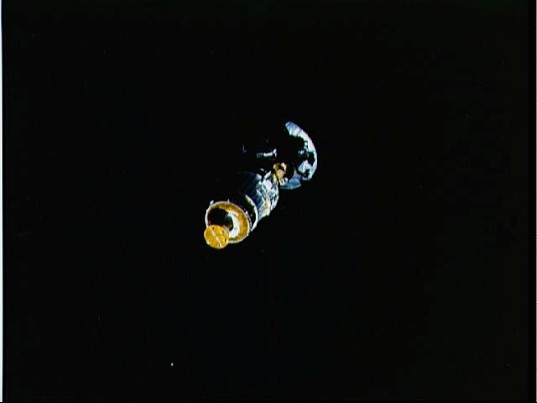 The Galileo spacecraft atop the inertial upper stage drifts into the blackness of space after deployment from the Space Shuttle Atlantis payload bay during mission STS-34, October 1989.