Getting up to speed with Curiosity as of sol 84, and two awesome mosaics

I've spent a pleasant day getting up to speed on Curiosity's activities over the last 40 sols or so. I missed a press briefing two weeks ago during the Division for Planetary Sciences meeting, and another one yesterday while I was at the opening ceremony for the shuttle Endeavour exhibit at the California Science Center. There's another briefing coming up on Friday at 10:00 PDT (17:00 UTC), "to provide an update on Curiosity's studies of the Martian atmosphere." I will not be missing this one! More on that in a moment.

You can see the results of today's work in my Curiosity sol-by-sol timeline. Curiosity has already spent more than three weeks at Rocknest, working through the very slow process of commissioning the sample handling systems. All but one extremely important activity -- the first soil analysis in SAM -- has been completed. Two samples were scooped and delivered to the CheMin analytical laboratory instrument. The two press briefings that I missed concerned the first CheMin delivery (which happened on sol 71, October 18) and the first CheMin analytical results, which show that the soil is made of the same stuff that basalt is, which should be no surprise to anyone. I'm sure there are lots of really interesting details about the component minerals lurking in the X-ray diffraction pattern though.

It was apparently a surprise that (according to the release) "Roughly half the soil is non-crystalline material, such as volcanic glass or products from weathering of the glass." Here, "glass" has a precise definition -- it refers to an material that usually forms a crystalline solid that displays no ordered crystal structure. The main way you get natural glass on Earth is by dumping lava into water, which quenches the liquid so quickly that atoms don't have a chance to line up into orderly crystals. But there's quite a lot of amorphous material in space that didn't form that way. I think, but am not sure, that cosmic ray hits can disorder the crystalline structure of minerals, making it amorphous. The Moon used to make glass by spraying magma into the cold vacuum of space, which produced soil containing lots of teeny little glass "beads." I need to ask a petrologist what might be going on on Mars.

If I don't sound that excited, don't think I'm being dismissive of the significance of these first results -- it's the first time anything like this has ever been done on Mars, and the fact that they've succeeded is exciting. But the science won't be really exciting until it can be presented to an audience that can really get into the details, either through a refereed journal paper or at least at a scientific conference.

The mission has been taking good advantage of being parked in one place for a long time to acquire images for an insanely enormously detailed color mosaic of their surroundings. The image I've embedded below is just part of that, at just one-fifth of its full resolution even when you click through twice to enlarge it all the way. It consists of 270 (three rows of 90) frames from the right Mastcam camera, and wraps a full 360 degrees around the rover, but is only about 12 degrees high. There are more download options here and a Gigapan version here. It is so huge at full size -- 84,213 pixels wide, in Ed Truthan's version -- that it can't even be saved in JPEG format (JPEG tops out at 65,535 pixels).

While parked at Rocknest to commission her sample handling system, Curiosity acquired hundreds of color images of her surroundings. This amazing panorama consists of 270 of those images. Full-size versions may be viewed here.

The images for this panorama were gathered on sols 64, 66, 67, 70, 72, and 74. Since then, there were more right Mastcam frames taken on sols 77, 78, and 79 at least. I don't know how many rows of 90 frames they are going to get done before they pull up their anchor and get driving again. It's already a phenomenal image, even without all the other pics they've taken since.

Anyway, back to the mission status. With those two initial CheMin deliveries complete, they wrapped up the commissioning and cleaning of the CHIMRA sample handling mechanism and declared it ready to use for science on sol 81 (October 28). Meanwhile, the other analytical instrument, SAM, began a lengthy Quadrupole Mass Spectrometer analysis of the atmosphere on sol 78, which it competed on sol 81. They had previously performed one other atmospheric analysis on sol 46.

They must now have their results in hand from the sol 81 analysis, so I expect that the headline of Friday's press release will be something to the effect of "First results from SAM." Like previous "first results" press briefings, it'll explain SAM and then deliver the news of the first atmospheric measurement. But this briefing is more hotly anticipated than previous ones, because everyone wants to know if SAM detected methane, and if so, how much.

Methane has been observed on Mars spectroscopically (although that observation is difficult and the results controversial). It's been observed to vary. This requires some ongoing process that creates and/or releases methane. That's because methane is a gas that has a short expected lifespan in Mars' atmosphere before ultraviolet radiation from the Sun breaks it apart and it reforms with other atmospheric components into different gases.

Some people will even tell you that the most likely explanation for Mars' methane is extant life on Mars. I'm not one of those people. For me, this is clearly one of those "extraordinary claims require extraordinary evidence" issues, and considering that even the initial observation of the existence of methane is controversial, we don't have extraordinary evidence yet. Don't get your hopes too high for tomorrow's briefing though -- there's really nothing that the Curiosity team can say tomorrow that will settle the argument. The most exciting result would be a definitive positive detection, but it's quite possible they may not have anything much at all to say about methane.

I'll close with one more bit of eye candy that came down from the spacecraft today. Curiosity has finally taken a complete self-portrait with the MAHLI with its lens cap off, showing the whole rover in beautiful color on the Martian surface. It could be a while before all the data comes down. But we already know it's going to be sensational, because thumbnail versions of all the images are on Earth. Here's a self-portrait created from those thumbnails. So awesome! 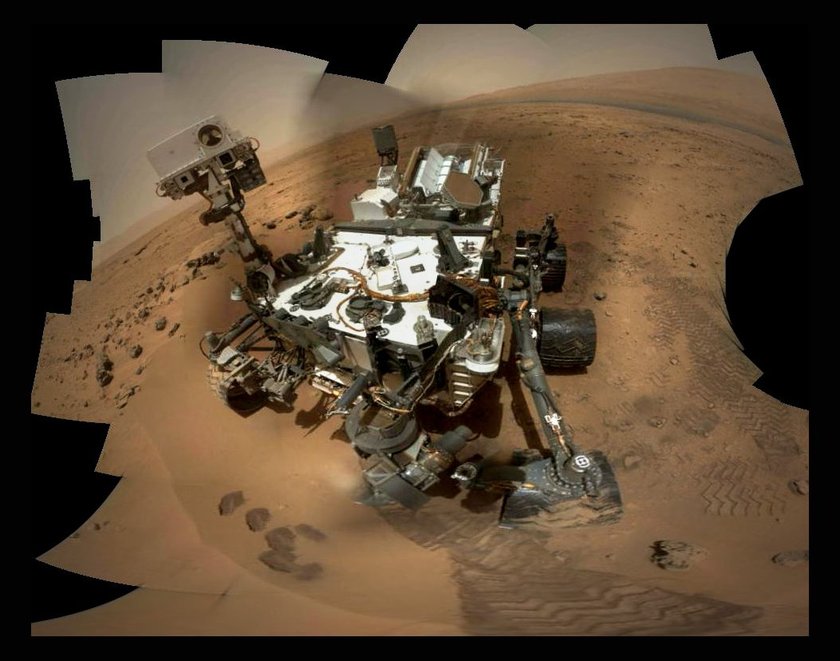 Considering that the conglomerate rock showed water and was very old, it must be very rewarding that the Gale crater promises to elucidate the wet-dry climate transition of Mars at the very least. "For me, this is clearly one of those "extraordinary claims require extraordinary evidence" issues, and considering that even the initial observation of the existence of methane is controversial, we don't have extraordinary evidence yet." And we should note that methanogenes uses some of the most energy demanding enzymes out there. It seems, not surprisingly, be the latest metabolic evolution and originating after the atmosphere oxygenation. (As already the ancestral methanophile metabolism did, albeit it is not as demanding.) The other way to biotically generate methane I know of is by massive bioproduction and its break down in, mostly I think, wet environments. Just maybe the crustal ice overlays a wet and massively bioproductive region from which methane can seep. But that is a long shot too.

Oops. Methanogens. And the posting script ate my paragraph spacing. :-/

Two questions from the last press brief: When asked if there were any surprises from the CheMin results they said the presence of feldspar but no one said why it was surprising. Any ideas? Second it was stated further analyses could identify the glasses in the sample. But since X-ray diffraction scattering depends on planes in crystals, it's not clear to me how they can do that with CheMin. Info appreciated.

Hi Emily, regarding the wheel tracks we can see in the images. On Earth, tracks on dry sand or dry soil do not leave clearly defined tread imprints. What we are seeing in these images indicates that something is holding the grains together almost as if the sand was moist. With moisture being out of the question, do you guys know what is going on there?

Hi Emily. Seems like a lot of people wonder how that was a self portrait of Curiosity as no sign of itself "holding" the camera at arms length but it was explained how after. Also, you twitter posts are great to keep up with all the info from Mars. Thanks for your hard work.

@Roy: See my earlier post for an explanation of the Chemin results and why feldspar is unusual. And SAM and APXS will be needed to determine glass composition, I think. @Keijo: it's actually Mars' dryness that helps things stick so well. The dust is really fine, and it's electrostatic forces that hold them tight to each other. Grain-to-grain electrostatic connections give them some cohesion. @Bill: thanks!