HiRISE's best view of Curiosity yet

I've been waiting with bated breath for this photo, and it didn't disappoint. Behold the Curiosity landing site as seen from HiRISE on August 17, or sol 12 of Curiosity's mission. The rover's in the same position as it was when it landed. But this was the first time since landing that Mars Reconnaissance Orbiter passed nearly directly overhead; it had to tilt less than 10 degrees to the side of its path to spot Curiosity on the ground. (The previous best image of the landing site had an emission angle closer to 30 degrees.) Being overhead does two things to improve the image. The range to the target is shorter, which means the resolution is better. And the path length through the atmosphere is shorter, which means it's less hazy. Both of those have combined to produce a view of Curiosity that resolves amazing details.

First, the wide view, which includes the rover's first driving target of Glenelg. I'll be using this as a base map on which to track Curiosity's driving progress. 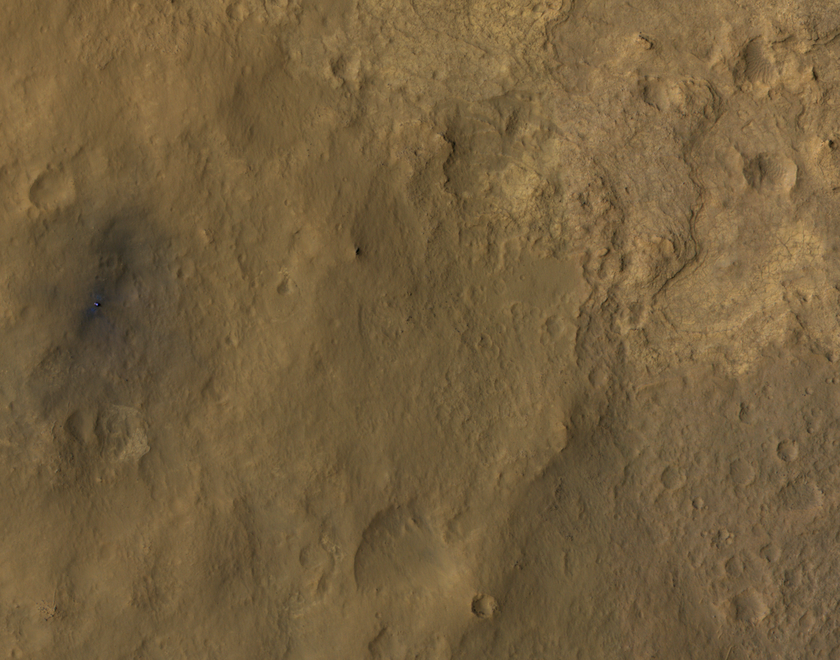 Curiosity as seen from HiRISE, 12 days after landing

And next, a full-resolution view centered on the rover. This is at 25 centimeters per pixel. The image is 134 meters on a side. 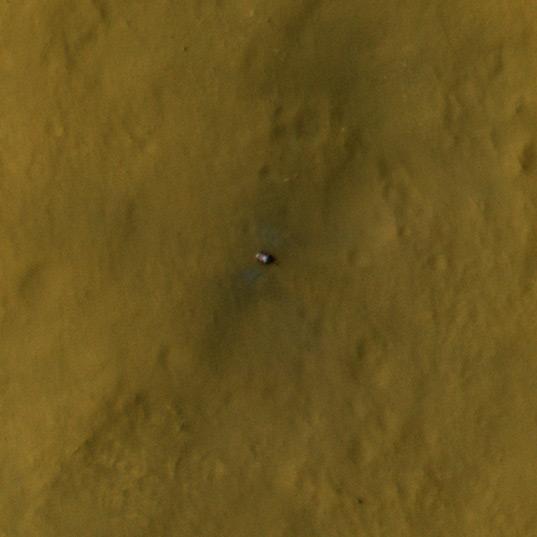 Squint at that photo and you'll clearly see the shadow of the mast poking in front of the rover. That's nothing we haven't seen before; HiRISE can even resolve Spirit and Opportunity's much shorter mast shadows. But check this out. Blow up the photo a bit more, and I can convince myself that I can see the mast head, the shadow of the turret (which is parked on Curiosity's left shoulder), of course the RTG, and even distinct bumps for each of Curiosity's wheels. That makes sense, because the wheels have 50 centimeters diameter, right at the resolution limit for a 25-centimeter-per-pixel photo. But still. We can take a photo from space of the six rover wheels on Mars. What an awesome camera!! 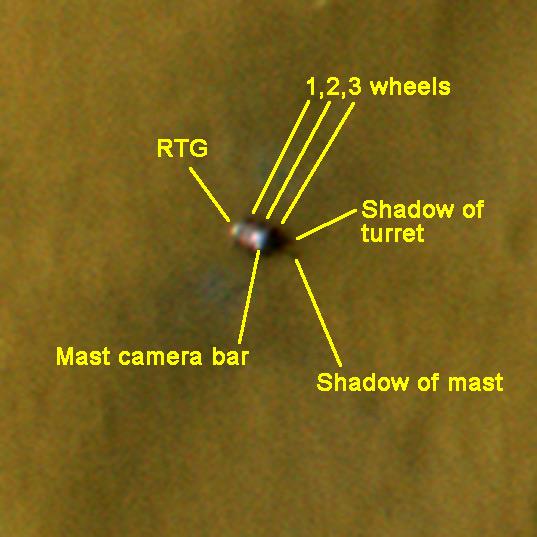 This is a cool site. No doubt about it. Emily, what's your role at the Planetary Society? Wish I could have come to the Planet Fest for the Landing Party, but navigating the last 50 km from the airport to the convention center was so daunting, that I decided to stay home and watch it on the PC. I'm an aero and astro engineer working full time for CARB and it's going to be a long time before we have a seamless transportation system here in CA, USA, Earth. Sigh.

Hi Emily Can you keep us appraised of the latest results from ChemCam? All we seem to get are tantalizing hints; the latest hint is of a variety of elements found during the last raster. Which elements? Which minerals? Did they get a read on the matrix holding the conglomerates together? What is the theory about the hydrogen and magnesium coating the rocks and calibration targets? What kind of dust is this?

This is the first image I've seen that gives a good sense of how far Curiosity will have to drive to get to its first waypoint. It's nice to finally have a scale bar!

No doubt about it, the next few years are going to prove very interesting indeed. Thanks, and keep up the good work.

Very neat! Is that darkening all around the lander the blast wash? If it was lowered by cables the powered portion would have hovered for longer than usual I assume, at probably just the right altitude to make one heck of a mess.

Hi Emily, On one of the news conferences JPL scientists seemed really excited about a discontinuity they observed on a photo taken by MastCam of Mount Sharp. Have you heard anything more on what they believe caused this? Have been reading your articles for years, your passion for the subject is contagious.

Amazing pictures , second only to those of lunar rover .Very many thanks for these . Sent from darkest Africa !

Awesome imaging system from orbit! I can't wait for the upcoming great discoveries!

Hi Emily, Do you know the state of play for the once vital HiRise Clickworker Program at NASA? It seems to me that using that machinery to coordinate surveys by the public of what HiRise sees in the zones near Curiosity might be a neat and useful thing. Thanks, Bob

Regarding the dark marks, in general, where Mars' bright dust is disturbed, the surface appears darker; that dark surface is still reddish-brown but because it's the darkest thing in the image, my processing made it really black-looking. Simon: I'll have more to say about that in the future; the feature they're talking about is called an "unconformity" and they knew it was there before but it looks spectacular from the ground. Bob: That particular program isn't currently running, but try Moon Mappers and Asteroid Mappers for very similar projects. Everyone: thanks very much for your kind comments!