When I got the newest issue of Icarus I was surprised that the cover featured photos of Uranus. I'm quite fond of Uranus and happy whenever I see it get any attention. (By the way, I am aware of every double entendre in this post. I can mock and love this planet at the same time.)

The cover photo was related to an article by Larry Sromovsky and 16 coauthors about "Episodic bright and dark spots on Uranus." I've written before about how these bright storms in Uranus' northern midlatitudes have made the formerly bland-looking world a much more exciting planet to study. Cloud activity was  observed in 1999, 2004, and 2005, but not since -- until late last year.

New cloud activity flared up in July 2011, but was not noticed until October. There were actually two different bright storms located very close in latitude (at 23 and 25 degrees north) but having quite different drift rates. One moved west at 9.2 degrees per day, the other at 1.4 degrees per day. Extrapolating the drift rates, the astronomers predicted that the two storms would have a close encounter on December 25, 2011.

They activated a Hubble Target of Opportunity proposal to get images before, during, and after that predicted event (on December 20, 25, and 29). But instead of a storm encounter, they found something quite different: the original spot had faded, but the second spot was found to have a companion dark spot. We've seen lots of dark spots on Neptune, but this was only the second ever observed on Uranus.

At this point, I asked myself: I wonder if those images are available? Hubble data is funny. Sometimes there are long proprietary periods, sometimes not. A bit of searching led me to Proposal ID 12463, which featured 32 photos targeted at Uranus on those three dates through different filters. And hot diggity dog, the data was not proprietary. Even better, among the filters that they used were the ones necessary to make approximate true-color filters. I sent an email to Ted Stryk, and the next day he sent me processed versions: Uranus as seen by Hubble WFC3 on December 25, 2011. 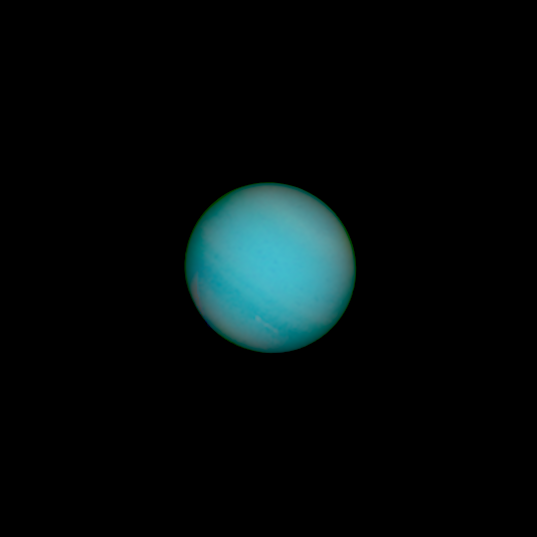 Astronomers exercised a "Hubble Target of Opportunity" to image Uranus when ground-based photos revealed that bright storms had blossomed in its midlatitudes.

The image didn't show the alleged bright and dark spots, though. I read the paper more closely, and sure enough, they -- especially the dark spot -- were only visible when viewed through certain narrowband filters at near-infrared wavelengths where methane is strongly absorbing. I grabbed those images from the Hubble website and produced a view that shows the bright and dark spots, very close together: 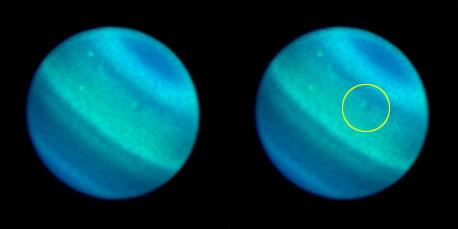 The close association of the bright and dark spot is no coincidence. Consider Neptune, which famously had a Great Dark Spot to show to Voyager. (The spot has since disappeared.) Check it out in this lovely image processed by Björn Jónsson: 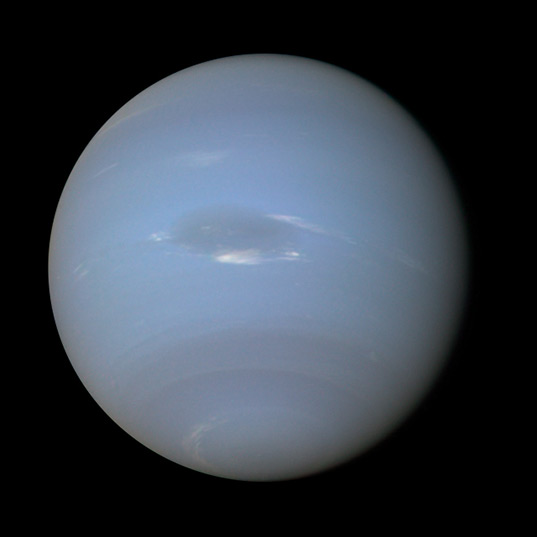 The Great Dark Spot is accompanied by some much smaller bright clouds, which "were termed companion clouds because they traveled along with it in defiance of the meridional shear of the local zonal wind profile." Originally described by Heidi Hammel, these clouds are thought to be "orographic." That word had me excited when I first read it because "orographic" typically refers to clouds that form near mountains, where moist air is lifted in elevation by local topography, expands (lower pressure up there) and therefore cools (remember, PV α T) beyond its dew point, so clouds form. I was like: there are mountains on Neptune!?

But that's not what they meant when they used the word "orographic." The clouds form for the same reason -- air is lifted topographically to an altitude where it expands and cools and a liquid phase condenses to form clouds -- but the lifting isn't caused by rocky mountains; it's caused by the air flowing around the deeper-rooted dark storm vortex. (Also, they aren't water clouds; they're methane.)

The paper delves into the positions and elevations of the bright and dark spots observed at Uranus in great detail, concluding that whatever is making the December 2011 dark spot dark is not the same thing that made Neptune's spots appear dark. The Neptune dark spots were probably clouds; the Uranus dark spot may actually be a clearing in Uranus' clouds, a hole through which we're seeing a dark methane-rich (but not methane-cloudy, it's too warm for that) part of its atmosphere.

As far as I'm concerned, the main point is that there are exciting things to see at Uranus -- storms that appear and disappear over a period of days or weeks, and holes that open in its clouds to provide windows into its interior. Those storms have been appearing and disappearing for years. It's my hope that I will see a spacecraft orbit Uranus in my lifetime.

Quite honestly, I think that a mission to orbit and probe Uranus would be awesome for space exploration. The late night comedians would never get tired of talking about it.

These are fantastic images, Emily. I'm giving a solar system talk next week at Chicon7 in Chicago. May I use these images? Are they available at full resolution anywhere?

Indeed, we should have continuous presence in EVERY planet and all their major moons.

According to one of the mission scientists, Cassini would be capable of making the trip to Uranus. It would be a matter of getting a gravity assist from Titan to fling it out of Saturn's grasp, and then making a long, slow trip to the orbit of Uranus. When it got there, I believe there would not be enough fuel to achieve orbit, so only a flyby lasting a few hours or days would result. The long, slow trip would take more than a decade, and Cassini's nuclear power supply would be near the end of its life when the spacecraft arrived, but it could be done. It might be the fastest way to get a probe to Uranus, and should be seriously considered. It's not the proposal I favor, though. The proposals for the end of Cassini are: 1. Keep orbiting Saturn until control is lost. Bad idea. Because of all the moons, the gravity field is complex, and the end result is likely to be a crash into Titan or another moon, spreading nuclear waste. 2. Crash into Saturn, deliberately. I don't like this, because it has poor science returns, so far as I know. Cassini does not have the instruments to take advantage of the descent into the atmosphere, like the recent Jupiter probe did. 3. Enter orbit around a moon. Cassini has enough fuel to make this work. I favor orbiting Titan. The spacecraft would be stable there for ~50 million years, in an achievable orbit. That's long enough for the Plutonium to decay to lead. Also, photos and other science could continue, both for Titan and for other moons that pass near, for another 20 to 30 years. Finally, Cassini could serve as a radio relay station for a future Titan landing mission, if it is launched soon enough. 4. Enter orbit around Enceledas. This is the most interesting moon, with the best science potential, but Enceledas is small, the orbit would be unstable, and eventually Cassini would either crash into the surface, or break free and later crash into another moon, in a few thousand years. 5. Go to Uranus. Good science potential, and if the probe dies en route, at least its Plutonium is headed for deep space, and is no danger to Saturn's moons. 6. Go to Neptune. Same advantages as the Uranus trip, but it would take up to 40 years, and the odds of surviving the voyage are very low.

Christian: Yes, you may use them. These are full resolution -- in fact, I didn't state it, but they have actually been blown up to 200% their original size. Uranus is far away from Earth, and even Hubble only gets so many pixels across its disk. Frank: It doesn't matter what option you favor, Cassini is crashing in to Saturn in 2017.