Well, this was a nice surprise. The MARDI images from Curiosity's descent to Mars were posted to the Curiosity raw images website several hours ago, but I didn't notice until someone on unmannedspaceflight.com pointed out that among the nearly 300 thumbnail frames (200 by 150 pixels) there was a single full-resolution image, and it contained the heat shield far below the rover. So cool. It is still mind-blowing to think that this snapshot was taken by a spacecraft flying in the air above a different planet. 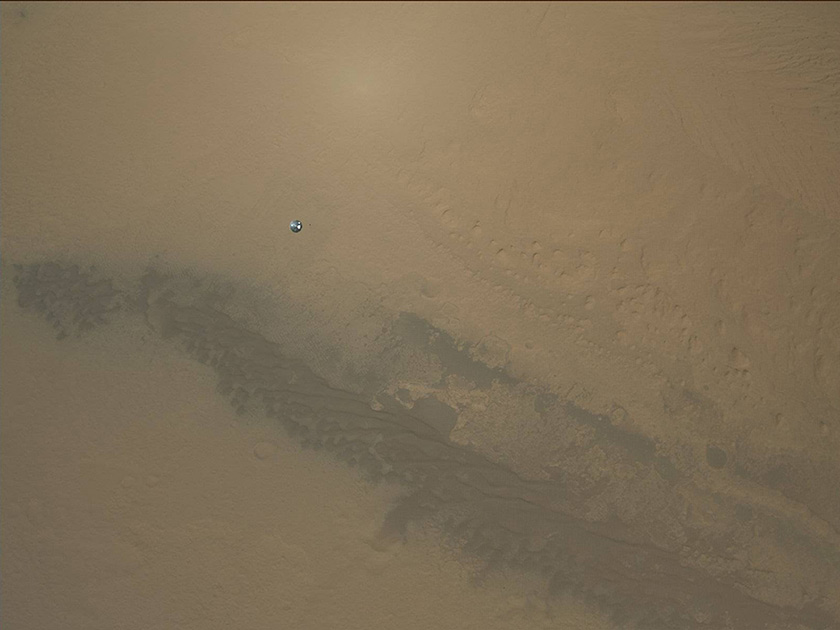 The raw image has some odd and distracting compression artifacts, so I did some light tweaking of the image in Photoshop to suppress them. "Compression artifacts" are features that weren't in the original image that get introduced into the image when it is run through an algorithm that shrinks its file size with some cost to the quality of the image. They have to compress the heck out of most of the images that are coming down from Curiosity right now because it's only communicating at 8 kbps right now, which is a pretty darned low data rate. It'll be wonderful when they finally get that high-speed link to Mars Reconnaissance Orbiter working and they can start downlinking at 2 Mbps.

Eventually, we should be getting back the entire MARDI descent video uncompressed, but the uncompressed frames are low in priority compared to science and engineering data, so we'll probably have to wait for some time. I thought about noodging the color and contrast a little bit to bring out more features on the surface, but when I tried that the image lost the sense of atmosphere separating the heat shield and the surface, so I decided to leave the color alone.

Related: Emily's continuing coverage of the latest images from Curiosity

I wonder if the bright spot at about the 1 o'clock position from the heat shield is the same sort of bright spot that can be seen from a small airplane on Earth, when more than about 3,000 feet above the ground? Also, is the actual landing spot visible in that image? Do we know yet exactly where the lander landed?

Yeah, that spot really looks like the opposition effect.

@Mike. I think the two white spots you see on the heat shield are calibration marks used to calibrate the brightness and color of the Mardi camera. See the first frames of the animation to get a better look of them.

What do you think about small dark spot near heatshiled? First I thought, it's a heatshiled shadow on the ground, but In opposition effect I can't find something like sahdow, maybe there is only some little darker circular feature as a shadow of parachute, but it's not so dark..

Yes, I thought "opposition effect" too when I saw that, but wasn't sure of the geometry. We asked about that dark spot on unmannedspaceflight.com and Mike Caplinger (Malin Space Science Systems) thinks it's a "bit of crud" on the detector.

What is that square or diamond-shaped "crater" to the right and below the heat shield? It's near a more visible round crater.

FYI: The white spots on the back of the heat shield are visible in this picture: http://www.nasa.gov/mission_pages/msl/multimedia/gallery/pia14127.html

I noticed the same thing Anne did. It looks like a square wall foundation. I wonder who built that? ;-)

So do I take it that the high-gain antenna is still not working?

So, they are doing the (lossy) compression on Mars (some martian algorithm?) before sending because of the slow data rate.. Does this mean when the 2mb transmissions come we get raw/uncompressed? I would presume so.. btw, what compression are they using?

Regarding the crater shape: there's a lot of degradation/modification of craters here; they're really old. It's not surprising that erosion has carved weird shapes into some of them. And regarding compression, it's just JPEG, but it has some funny effects on the Bayer-filtered images. Yes, the hope is that they will eventually return losslessly compressed versions.