Junocam will get us great global shots down onto Jupiter's poles

Juno is a mission that will peer deeply into Jupiter's interior, and didn't really need to take a visible-light camera along in order to accomplish its scientific goals. But I think nobody could bear sending a spacecraft to Jupiter without getting pictures from up close. Especially considering the unusual orbit Juno will have, a polar one that sweeps very close to Jupiter's cloud tops.

So they added Junocam. Junocam is an instrument that is specifically intended for public engagement. In particular, it was added to the spacecraft in order to take advantage of Juno's unique, polar vantage points on the planet. Its field of view is designed to fit all of Jupiter within it as Juno flies over the pole. Once its data is returned to Earth, it'll be released immediately to the public, and at the press briefing they showed Björn Jónsson's wonderful Voyager mosaic over the Great Red Spotas an example of the kinds of help they are hoping to get from the amateur community. 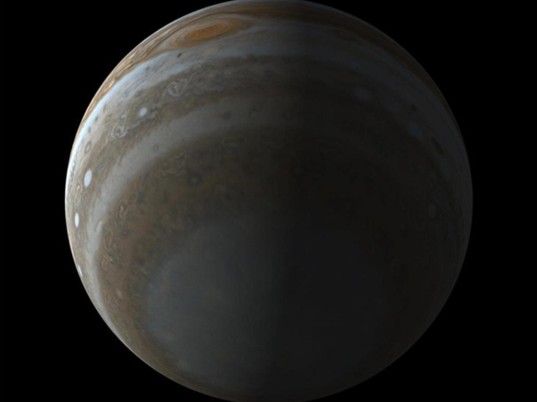 This simulated view of the south pole of Jupiter illustrates the unique perspective of the Juno mission. The spacecraft's polar orbit will allow Junocam to image Jupiter's clouds from a vantage point never accessed by other spacecraft. Junocam has a 58-degree-wide field of view encompassing the entire polar region. The view illustrated here simulates an image taken 40 minutes before Juno's closest approach to Jupiter. At closest approach, Junocam's images of Jupiter's cloud tops will have a resolution better than 5 kilometers per pixel.

Here's a description of the instrument and what it'll do. This information landed in my inbox last month -- thanks very much to Mike Caplinger at Malin Space Science Systems (MSSS), who sent me so much raw material for this post! -- but I didn't want to post it until Juno was safely on its way to Jupiter. With today's successful launch, I now feel free to post.

Junocam faces some significant challenges. Juno is a spin-stabilized spacecraft, and Junocam is mounted on one side, so as Junocam takes pictures it has to deal with both the spacecraft's motion around Jupiter and the spacecraft's rotation. The orbit is one that is not optimized for imaging; it is highly eccentric and goes from a perijove of about 5,000 kilometers to an apojove of 2.7 million kilometers over the course of its 11-day period. Most Junocam imaging will happen in the two or three hours around perijove, though they may make lower-resolution atmospheric movies at other times. When the spacecraft flies over the poles, the planet will roughly fill the Junocam field of view, and as the spacecraft gets closer to Jupiter the images will have higher resolution but lower areal coverage. The Juno orbit is roughly along the terminator, so about half of each image will be of the dark portion of the planet. It's possible that they will attempt searches for lightning, aurorae, rings, and other faint objects, but these details are still being discussed and the camera is not really designed for very dim targets. Here's a simulated view of what Juno will see from orbit:

Another challenge is the intense radiation environment. One of the major unknowns is the effect of radiation on the camera, both in terms of image quality near perijove and in the lifetime of the camera's electronics. The team at MSSS has designed the system to last for only the first eight orbits, though they hope that this is a conservative estimate of its actual lifetime. They have included onboard processing software that will attempt to correct radiation-induced noise.

About 40 megabytes of Junocam data can be sent back to Earth on each orbit; depending on the exact size of each image and the amount of data compression, somewhere between 10-100 images will be taken. A very common question about Junocam is whether it will be able to image Jupiter's moons, especially volcanically active Io. In theory, Junocam can image them, but unless there is a serendipitously close approach, they will never be more than a few pixels across. For example, if Io were directly above Juno it would be at a distance of about 345,000 kilometers and resolution would be 232 kilometers per pixel, so the whole satellite would only be about 16 pixels across. The other moons will be even farther away.

Some nitty gritty details: Junocam is a "pushframe imager" like MARCI on Mars Reconnaissance Orbiter, except that rather than using spacecraft orbital motion to build up coverage, it uses spacecraft spin. Juno spins at about 2 RPM, and Junocam has to use "Time Delay Integration" (a form of electronic image stabilization) to keep the images from being blurred. (To learn about how a different instrument uses Time Delay Integration, read this blog post about HiRISE.)

Junocam has a wide field of view, covering about 70 degrees around a line perpedicular to the spacecraft's spin axis by a full 360 degrees around the spin axis. As such the resolution is low -- the instantaneous field of view (the angle one pixel subtends) is 673 microradians. (For comparison, Dawn's Framing Camera has am IFOV of 94 microradians, and Cassini's Narrow-Angle Camera is 6 microradians.) The Junocam resolution thus ranges from about 3 km/pixel at closest approach to about 1800 km/pixel at apojove, when the planet will only be about 75 pixels across. For the two hours around closest approach, Junocam will achieve better resolution than Cassini did during its Jupiter flyby.

Junocam takes images in four colors (wavelength bands) -- blue (420-520 nm), green (500-600 nm), red/near-IR (600-800 nm) and the methane absorption band around 890 nm. The last allows the instrument to map the abundance of methane in the jovian atmosphere. Typical exposure times are about 1/80th of a second for the visible bands and about 1/2 second in the methane band.

Junocam may be operated during the Earth flyby in October 2013. But because Junocam was designed for the dimmer sunlight at Jupiter's orbit (5.2 AU), imaging Earth without overexposing it may be challenging. They are also considering imaging the Moon. Junocam will be checked out for the first time 20 days from now, long after Juno has left Earth behind.

eyepped Current plan for Juno is to destroy the spacecraft by diving into the Jovian atmosphere following completion of the nominal mission. What a waste. Why not extend the mission by 'pumping-up' her orbits using gravity assists from Jupiter's Gallilean moons; taking further imagery and other science from these and the minor satellites of the system? Would it be feasible to even eject the spacecraft from the Jovian system so as to investgate other objects of interest nearby, say the Trojan asteroids, which follow the planet some 60 degrees behind the planet or are trapped in some of the other Lagrangian points? Even ejecting Juno further outward in the solar syatem would be a great test to see how far from the sun the probe's solar panels can collect useful energy to power the spacecraft. For similar reasons to above, I'm dissapointed that they plan on crashing the Cassini spacecraft following completion of its mission to Saturn.

I don't understand why such a large FoV is used. I'd far rather have much higher resolution. I suppose that the scientific value of visible-light imaging for a gas planet is considered low, and images that encompass an entire pole are thought to be more appealing to the public. I wonder how image quality will compare to what Galileo sent.