Juno is on the way to Jupiter!

It almost looked like it wasn't going to happen today, but it did! At 16:25 UTC, a huge Atlas V 551 lifted off with the Juno spacecraft and sent it on its way to Jupiter. The launch was 51 minutes later than initially planned due to a "helium issue" and an annoying boater who wandered into the downrange safety area, but Juno had a 69-minute-long launch window -- plenty of time, it turned out, to deal with the issues. 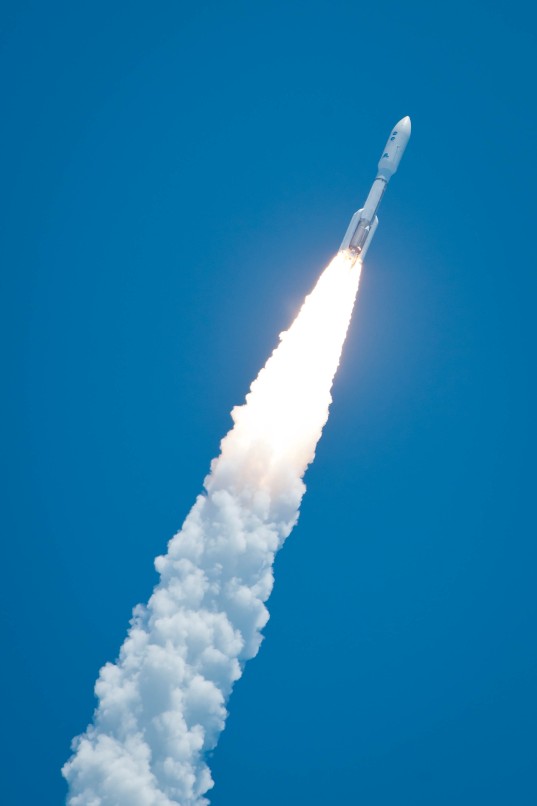 A triumphant project manager Jan Chodas said that the Deep Space Network acquired the signal from Juno only 24 seconds after its separation from its Centaur upper stage, and locked on the signal at 39 seconds after separation. The three great solar wings unfurled as expected five minutes later. "We are stable, we are spinning, we are power-positive, and we are commandable."

The three huge solar wings opened as planned, and the spacecraft is now rotating at a gentle 1 revolution per minute as it heads onward into solar orbit. Now begins a long cruise. It'll return to Earth for a gravity-assist flyby on October 9, 2013 and will enter orbit at Jupiter five years from now, on July 4, 2016. 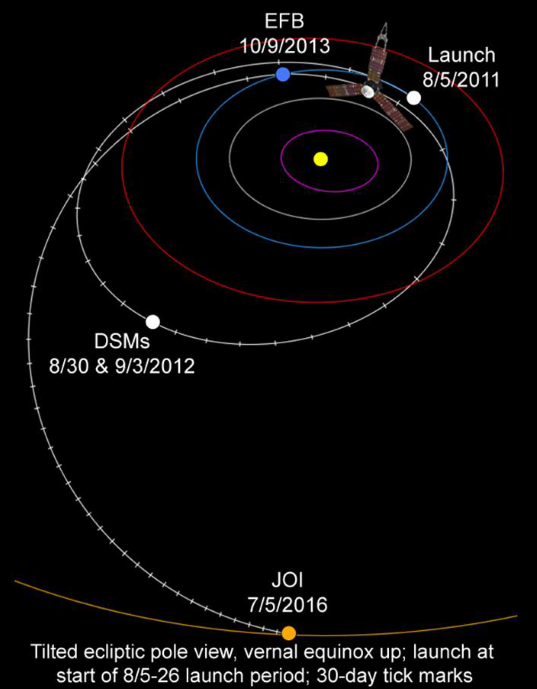 Many people were conscious of Juno being the first launch after the end of the Shuttle program. Participants in the NASA Tweetup commented on the relatively small crowd for this launch compared to Shuttle launches. Representing NASA, George Diller rightly stated that this is a public relations problem for the space agency, and that somehow public attention needs to be redirected toward the scientific missions: "Right now science is the positive face of [NASA]." They actually invited 10,000 people to attend, and the crowd was, in fact, unusually large for a science mission. Project scientist Scott Bolton: "We need to make sure that everybody realizes that NASA reaches out to understand nature." Perhaps this should be a major goal for the Planetary Society -- channeling the public's dreams of being astronauts in Earth orbit into dreams of riding robots deep into space.