Cassini caught a particularly nice grouping of moons two days ago through the red, green, and blue filters needed to make a natural color view. A couple of other sites have posted this image already but I couldn't resist making my own color version. There are five moons here: Janus, Pandora, Enceladus, Mimas, and Rhea. 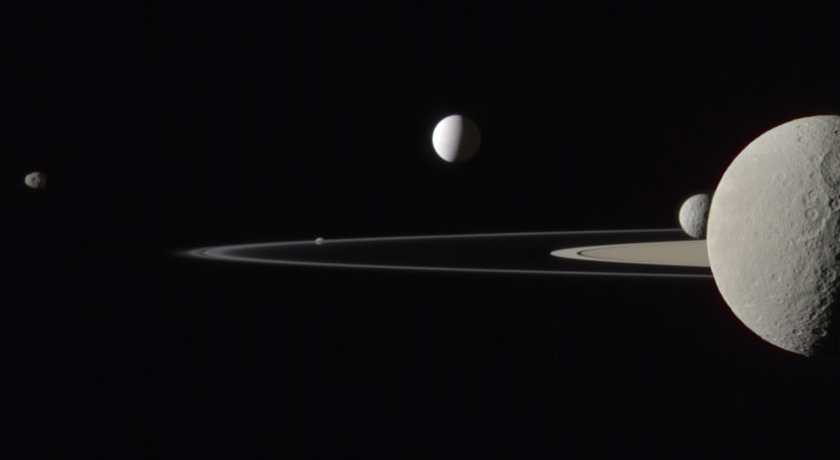 A gaggle of moons

Cassini caught five moons at the edge of Saturn's ring system in this natural color photo from 29 July 2011. From left to right the moons are Janus, Pandora, Enceladus, Mimas, and Rhea.

When I see groupings like this I wonder: just how precisely did they need to time their capturing of this photo, in order to catch all five moons? And would it have been possible to get it with Rhea entirely within the frame? To answer those kinds of questions I always head to the PDS Rings Node Tools page, where there's a Saturn Viewer to play with. Plug in dates and times and desired fields of view and you can see exactly where every moon was and how quickly it was moving. Here's an animation of some Saturn Viewer simulations, one frame per minute, for the 20 minutes surrounding the moment that Cassini took its photos. Note that the three moons on the left are on the far side of Saturn from Cassini and moving to the left, while the two moons on the right are nearer to Cassini than Saturn and are moving to the right.

A simulated view from the Rings Node Saturn Viewer through Cassini's Narrow-Angle Camera on July 29, 2011, when five moons passed through the field of view. Cassini took a "Kodak Moment" shot of all five at about 14:53:00, centered on Enceladus. The animation is sped up to 120 times actual speed.

Of course there wasn't a single "moment" when Cassini snapped the color photo; it took the original red, green, and blue images one after the other. That always makes the task of composing color views challenging. Here's an intermediate step in the processing, in which I'd aligned the rings with each other, but not yet the moons:

Red, green, and blue-filter images taken by Cassini on 29 July 2011 were aligned on the ansa of Saturn's rings, which appears its proper yellowish color. But the motions of the five moons between the acquisition of the three pictures cause them to spread out across the different color channels.

To finish the images, I had to do some cutting and pasting to align everything -- I picked the position that everything occupied in the first, red-filter image, because the moons were clustered more tightly and because that way there would be less fudging of the rings involved. It was easy to line up Janus and Enceladus -- just cut out and move the green and blue images until they lined up with the red one. Pandora was slightly harder, because when you cut out Pandora you're also cutting some rings; I had to take bits of rings from elsewhere to fill in the gaps left behind. The most challenging was Mimas and Rhea because of their overlap and because there was less of Rhea available in blue and green filters than there was in the red filter. I could have chosen to crop the image where Rhea ended in the blue filter but I wanted to preserve a view of more of Rhea, so I fudged that by filling the gaps in Rhea coverage in green and blue filters with a strip of data from the red-filter image, adjusting its brightness to match the appearance of Rhea in the other two filters. It works fine because that strip lies near the terminator (day-night boundary) where variation across Rhea has more to do with light-and-dark shading from topography than it does with any color changes there may be across Rhea's surface.

One thing that didn't take much work is the color. Often with Cassini images there's a subjective step in which you have to adjust the levels of the different channels to make the colors look right. But whenever there is a color composite containing both black space and Enceladus, getting the colors right is easy. Black space is black; Enceladus is pretty darn close to white. The automatic contrast stretch applied to the raw images doesn't actually do any stretching (or, at least, doesn't stretch the different-color channels in different ways) when there's a lot of black and white pixels already in the photo. So the rest of the colors come out pretty close to true.