I had to wait until the kids were in bed and the husband fed last night before I finally had time to sit down and really look at the Dawn images of Vesta. And I still hardly knew where to begin. This brand new world is just so different than others I've seen. Of course some aspects are familiar. Every solid world (except maybe Io) has craters, and so does Vesta. Smaller ones, like Phobos and Eros and Lutetia, have grooves, and so does Vesta. There are some worlds, like Hyperion and Epimetheus, that have sustained impacts nearly large enough to shatter them, leaving a crater as wide as the body itself, and a polar peak -- Vesta has that too. It has craters with unexpected albedo variations, like Phoebe. Lots of things are familiar. But, taken together, they're like nothing we've seen before. And how Vesta's albedo (brightness) varies across its surface -- there are few other small worlds that have such obvious color variety. Miranda has that; the Moon has it; Mercury doesn't. (Iapetus beats them all.)

I think there's probably no better place to start than the rotation movie released early today. The version below is not quite the same as what was posted on NASA's website. Tayfun Öner "tweened" it, meaning that he used morphing software to interpolate between adjacent frames to smooth the animation. These morphing algorithms tend to do a poor job where features appear out of darkness, rotating into daylight at the limb, but everywhere else it is impressively smooth, making one feel that Vesta really is spinning smoothly before your eyes.

Dawn captured 64 images of Vesta over one rotation period (a little more than 5 hours) from a distance of 5,200 kilometers on July 24, 2011, making a movie of its rotation. In this 720p native resolution version, Tayfun Öner has tweened the images, making the rotation appear smoother.

I don't know if this works for everybody, but the way I have approached this video is to play it over and over again. Each time I play it, I pick one thing to focus on. You might think I'd start with those wild grooves, but they're the part I understand least; better to start with phenomena I understand and step from those into uncharted territory. So the first thing I look at is the craters. 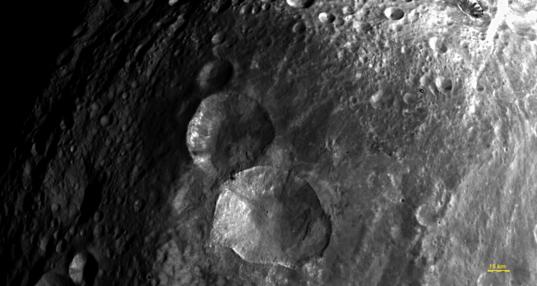 This set of three craters has informally (but obviously) been nicknamed the "Snowman" by the camera's team members. It is located in the northern hemisphere of Vesta. The image was taken on July 24, 2011, from a distance of 5,200 kilometers.

There are big ones and small ones. There is the distinctive triplet of the "Snowman" crater early in the video, and the odd black-streaked craters both at the beginning and the end. Replaying it again to look at craters, I notice the subtle imprints of old craters that have been worn down nearly to oblivion by new craters. It appears to be a pretty saturated surface. "Saturated" can mean lots of different things, but in this context it refers to a planetary surface that is so heavily cratered that, on average, every time a new crater forms, an older one is destroyed; these are four-billion-year-old cratered plains.

...Except that's not true everywhere. Replay the video again, and look at the southern hemisphere.

[I think I should pause here to talk a bit about Vesta's geography. Vesta is not spherical. Roughly speaking, it's a flattened sphere; it's about 570 kilometers across its equator, give or take a few percent, but only 470 kilometers across pole-to-pole. You don't even really need to ask where its pole is; for largish bodies in the solar system, the two fattest axes wind up on the equator, while the shortest axis is the rotation axis. Any other orientation will get tugged upon by the gravity of Sun and Jupiter and, with the help of forces of internal friction that tend to dissipate energy, will eventually wind up with the shortest axis being the spin axis. Conveniently, there's a great big peak marking Vesta's south pole, and grooves lining up pretty much parallel to its equator. Orienting myself on Vesta is going to be pretty easy, maybe even easier than orienting myself on Iapetus.]

Anyway, getting back to the video: look at the southern hemisphere. Playing the video a few times, I think I can see areas of "plains" that appear unmarked by craters. Playing it again, I can't convince myself that I can see any craters that are as large as the "snowman" craters. These two things together -- smaller craters and fewer craters -- means a younger surface. This is of course what I was expecting, because solar system simulations have led people to the conclusion that the gigantic impact that left Vesta with an enormous peak at its south pole and scattered the eucrite, diogenite, and howardite meteorites across the solar system happened roughly a billion years ago. That may sound like a long time ago, but as solar system events go it's relatively recent.

Different personalities of craters on Vesta, as seen in the images taken during a rotation characterization on July 24, 2011. All are at about the same scale, with each square very roughly 75 kilometers across. Clockwise from top left: one of the splashy fresh craters with its strange cascades of dark material; a larger, crisp-looking crater, one of the Snowman triplet; what I think is a crater similar in size to the Snowman one, but heavily degraded and covered with other, smaller impact craters; and some southern hemisphere terrain, featuring a couple of small fresh craters but also some crater-free intercrater plains, suggesting this area is more youthful than the northern hemisphere.

The image below is mostly just to illustrate that Dawn's getting a lot more information about the craters than you can see from the black-and-white images. It's too early to interpret this image, to say what it means about variations in surface composition across Vesta, but it does show that Dawn's getting some great data. 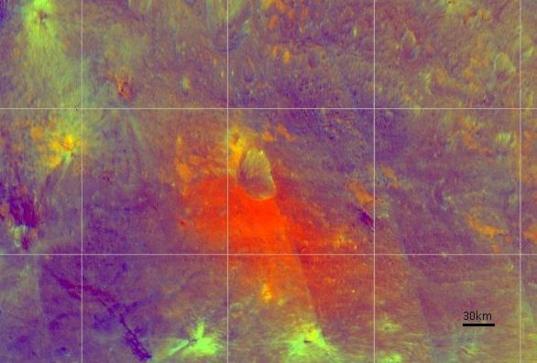 Dawn's framing camera can capture images of Vesta in infrared wavelengths where its rocky materials display more pronounced color differences than can be seen in visible wavelengths. This image is exemplary of the way such infrared images can be used to separate surface materials into areas of similar and different composition. It will take some time before the camera team is confident enough in their instrument calibration that they will be able to turn this colorful data into information about the distribution of specific minerals or different grain sizes in the regolith across the surface.

OK, so much for the craters. Next, I'm stepping back and looking at the 3-dimensional shape of the world. Hubble really did get it right. The top half of Vesta has a quasi-round shape, but that roundness doesn't extend to the south pole. It's like a slice has been taken off of Vesta a bit below its groovy belt. The flatness of the south pole just looks wrong and strange.

The northern hemisphere has its topographic oddities, too. Right at the start of the movie the glancing sunlight illuminates a deep gouge into Vesta's surface. It doesn't look like an impact crater, and there seem to be grooves running through it and bounding it at its top. And -- I can't tell if this is an optical illusion or not -- it looks like the dark splash that surrounds the snowman craters comes to an abrupt edge on its eastern edge at a place where there's a sudden change in the slope of the surface, as though Vesta has been faceted.

So, on to the grooves. Here's a closeup of some of the more pronounced ones: 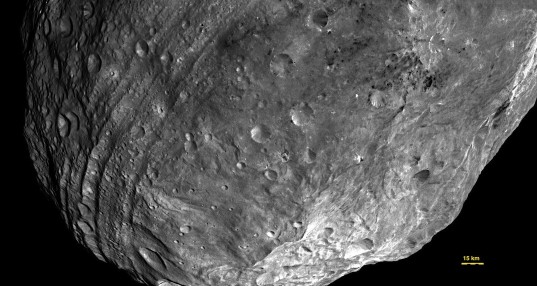 In this image, a peak at Vesta's south pole is seen at the lower right. The grooves in the equatorial region are about 10 kilometers wide. The image was taken on July 24, 2011, from a distance of about 5,200 kilometers. 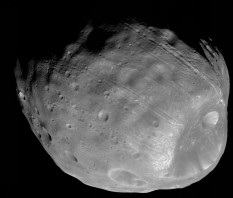 Mars Reconnaissance Orbiter captured this beautifully detailed view of Mars' moon Phobos on March 23, 2008. The full-size version has a resolution of 5.8 meters per pixel, revealing many tiny craters in Phobos' smooth plains. A color version is also available.

The grooves are very interesting. Grooves have been seen on lots of other bodies, most famously Phobos (at right) but I just don't think that Vesta's look quite the same. Phobos' grooves look like fused chains of pits; one possible explanation for their formation is that they mark subsurface fractures, where regolith from the surface has drained into gaps opening underground.

Vesta's grooves don't look like chains of pits at all. Most of them do appear to be concentric to that south polar impact basin, but there are exceptions. One way that the science team will try to investigate the connection of the grooves to the basin is to try to figure out whether they're the same age or not. In the version of the image below, I've scrawled a few arrows to point out some superposing relationships, the first tool a geologist uses to figure out the history of an object. There are lots and lots of small craters (yellow arrows) that clearly lie on top of the grooves. There are some places where you can see evidence for what might be much older craters that the grooves cross through; I've outlined one with magenta lines. 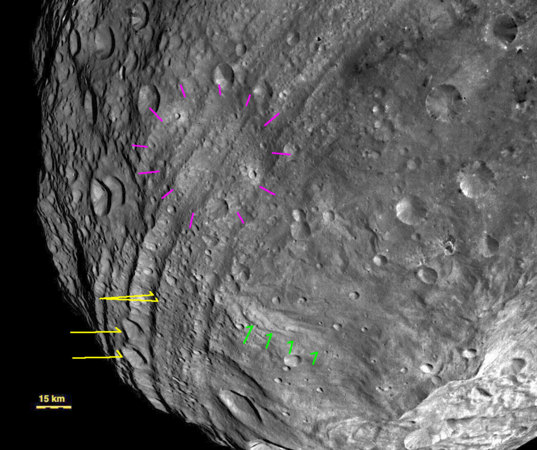 My first reaction to examining these relationships is that the grooves seem to have a lot more small craters sitting on top of them than the relatively crater-free south polar region. That would imply that the grooves are actually older than the surface of the south pole. Could the grooves have existed already when the massive impact happened to fall right at their center? That seems really unlikely. Here's another possibility: the grooves and south polar impact happened at the same time, but the south polar region has since been resurfaced. There's certainly some odd texture to that south polar surface, like the bit I pointed to in green. Could the impact have melted a bunch of Vesta and set up some surface volcanism that persisted for long enough for the surface of the south pole to have a younger crater age than the grooves?

Who knows the answers to these questions? I certainly don't. And my speculative explanations for what I'm seeing are, of course, much more likely to be wrong than the ideas that the science team was tossing around at yesterday's press briefing. But asking questions like these, and chasing down the clues we need to answer them, is the whole reason Dawn is at Vesta. What a great mission this is going to be!