Evidence for rain on Titan

Last week, Zibi Turtle and Jason Perry and a dozen other coauthors published a paper in Science discussing evidence for rain on Titan. I don't write about Titan much on this blog, which is a shame because Cassini has been assembling a vast trove of data from its studies of Saturn's largest moon. 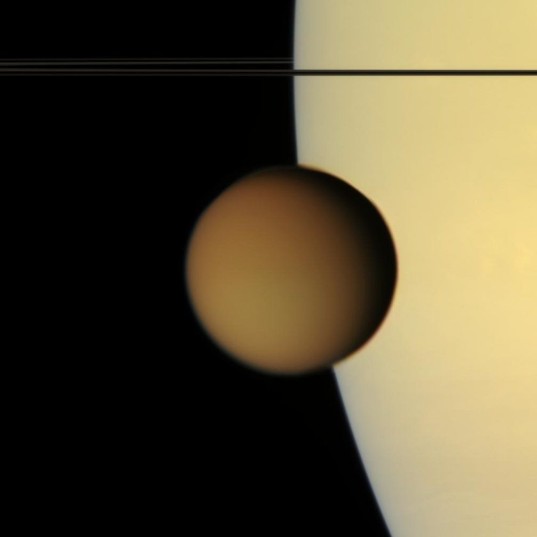 This view of smoggy Titan against the limb of Saturn is composed of photos taken by Cassini on 1 August 2007 through red, green, and blue filters, so it shows the moon and planet approximately as they would appear to the human eye. Titan's absorbing atmosphere is much darker than Saturn, whose light shines through Titan's upper haze layers, particularly the north polar hood.

I neglect Titan mostly because Titan is hard. For most other places and things that Cassini sees, I can show you one pretty picture or another, and with a little explanation, the observation or discovery becomes fairly obvious. But everything about Titan is the opposite of obvious. Its surface is hidden by an impossibly murky smog, partially filling the thickest atmosphere in the solar system (outside of the gassy envelopes of the giant planets, that is). Cassini was specially designed with instruments that are capable of penetrating this smog, but what we can see is still hazy or difficult to interpret. There are no easy conclusions; scientists can only say, "I think this thing is happening, but I can't eliminate the possibility that it's this or that other thing."

With that context, I'll describe this cool paper, which depends upon Cassini's seven years of investigation of Saturn's murky moon. Cassini has fairly thoroughly mapped Titan using three instruments. The main camera, ISS can penetrate the methane-rich atmosphere in an infrared wavelength to see patterns of light and dark on the surface, but it can't see the shapes of Titan's landforms very well, because there are no shadows on Titan; it's always a cloudy day there. The RADAR instrument can see landforms in much better detail, but has only achieved partial coverage of the moon in skinny swaths. The VIMS instrument is a camera that's lower-resolution than ISS, but it can see through Titan's atmosphere in several infrared wavelengths, allowing scientists to read "colors" in the surface and even maybe some shape from shading at the very longest infrared wavelength.

Taking these three data sets together, we can now say that Titan has methane-ethane lakes near its poles (more in the north than in the south), with arid lands in between, dominated by east-west trending dunes of windblown grains of hydrocarbon-rich material. Although the middle lands are now dry, Zibi and her coworkers report, riverbeds are visible across the whole planet, at every latitude.

When Cassini got to the Saturn system, it was late summer in the southern hemisphere. After seven Earth years, Cassini has observed about a quarter of a Saturn year, seeing summer turn to autumn in the south. Scientists are now watching Titan closely to see if the changing seasons bring any changes to the patterns of wetness and dryness across the moon. They've certainly seen spring weather, like the moving clouds in the animation below.

The question driving this research is, they wrote in their paper, "Does methane rain flood Titan's low-latitude channels during rare seasonal storms, between which the surface dries out, or are the channels remnants of an earlier, wetter equatorial climate?"

Excitingly, Cassini has detected two major, unusual cloud events at Titan, one in April 2008 and one beginning in late September 2010. In both cases, "white clouds were observed at low latitudes over several weeks." And even more excitingly, the scientists witnessed changes on Titan's surface following the 2010 cloud event. "ISS observations in October 2010...revealed differences in surface brightness along the southern boundary of Belet, an extensive dune field. Some of the bright terrain bordering Belet darkened by >10% while adjacent areas remained unchanged." Yet those changes didn't last: "Only some of the darkened area persisted through 29 October, and even more territory had reverted by 15 January 2011." Clouds -- surface changes -- it's not hard to guess that there may have been rain on Titan; but it's hard to prove.

Here's a series of images showing the changes. Before you look at the images, just stop a moment to consider the fact that it took Cassini five separate flybys to assemble the data for this comparison -- five different Voyager-like flyby encounters with Titan, each with a carefully orchestrated set of observations in which the instruments had to cooperate and take turns using the spacecraft's time and energy. It takes patience and a lot of work to study change on Titan.

This series of images from Cassini shows changes on the surface of Saturn's moon Titan, as the transition to northern spring brings methane rains to the moon's equatorial latitudes. Some of the most significant changes appear within a period of only a couple of weeks.

The brightest objects seen in these images are methane clouds in the troposphere, the lowest part of the atmosphere, which are most visible on the left of panel B, the lower half of panel C, and the right of panel D. Surface features appear in shades of gray. These images show changes (outlined area) along the southern boundary of a dune field near the equator named Belet. Dark Belet occupies most of the top of these images.

The first image in this montage, panel A on the left, was taken early in the Cassini mission on Oct. 22, 2007, and shows how this region had appeared before the storms. The second image, panel B, was taken on Sept. 27, 2010. The huge arrow-shaped cloud is just out-of-frame to the left in panel B. The arrow-shaped cloud was quickly followed by extensive changes on the surface that can be seen in panel C, an image captured on Oct. 14, 2010. These changes cover an area of 500,000 square kilometers (193,000 square miles), roughly the combined area of Arizona and Utah in the United States.

These images were re-projected, and the view in each is centered on terrain at 19 degrees south latitude, 251 degrees west longitude. Images in panels A, B, D, and E were taken with the Cassini spacecraft narrow-angle camera using a spectral filter sensitive to wavelengths of near-infrared light centered at 938 nanometers. The image in panel C was taken with the Cassini wide-angle camera using the same filter. The views were obtained at a range of distances from approximately 211,000 kilometers (131,000 miles) to 1.85 million kilometers (1.15 million miles) from Titan. Scale is about 7 kilometers (4 miles) per pixel in these re-projected images.

So: how do Zibi and her coworkers set about making the case that this represents evidence of methane rainfall on Titan? The first thing to do is to show that these really are changes on the surface, not just artifacts of the different viewing geometry of the different flybys, which they do.

The next thing to do is to consider alternate hypotheses. They propose three: (1) the darkened area is a new lake, flooding low-lying regions; (2) the darkened area is a place where there has been aeolian modification (movement of dunes); (3) the darkened area is a place where there was cryovolcanism. They discuss reasons why these are unlikely. For instance, flooding doesn't work because the shape of the darkened area doesn't match topography. The strongest evidence against all three of these hypotheses is the rapidity with which the changed areas reverted to their former appearance.
In the end, they say, the simplest explanation for the changes they observed -- and one that's supported by the observations of clouds -- is "precipitation from a large methane storm over Titan's arid low latitudes, as predicted near equinox by atmospheric models."

In other words -- the climatologists predicted rain; and we saw it. Predicting weather on another planet! That's amazing.

I'll leave you with some lovely RADAR imagery, crossing the southern boundary of Belet, the same place that saw the rainstorm. As usual, I got this from Jason Perry's great website of Titan RADAR images.

This radar swath crossing the Belet dune fields of Titan's trailing hemisphere was captured by Cassini during the "T49" flyby on December 21, 2008. It covers an area where the imaging team saw methane clouds form and dissipate, and a darkening, then lightening, of the ground surface in October 2010.