Today the MESSENGER team briefed the press on the impending arrival of their spacecraft at Mercury. This briefing is the one that is intended to help media who have not been paying attention get up to speed, so while I listened in I didn't expect to hear anything that was really news to me. (In fact I hoped not to hear any news, because really the only unexpected information that could come out of the mission at this point would be bad news. Don't worry; all's well with the spacecraft.) Before I forget to mention it, if you'd like a chance to have your questions about MESSENGER answered, check in to the MESSENGER Web chat tomorrow at 14:00 UT. 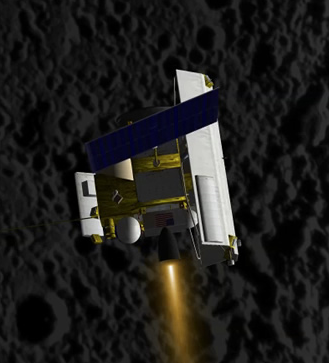 So there wasn't much to report from today's briefing except that they're on course for the March 17/18 orbit insertion. They released this nice visualization of a typical orbit of MESSENGER at Mercury, a complicated dance of the spacecraft in which it exchanges among all its different instruments, alternately photographing the surface and performing spectral measurements. You can see how the narrow-angle camera footprints make small squares at the center of the larger wide-angle camera footprints (both outlined in light blue). The wide-angle camera "flashes" repeatedly as it cycles through all of its different-color filters. There's one little swing of the spacecraft to point at an off-nadir target with the narrow-angle camera before it gets to the close-in imaging, which it performs all with the wide-angle camera at the same time as it's gathering an altimetric profile with its laser altimeter (pink). Also note how the spacecraft periodically has to swing quickly through a 180-degree turn in order to keep its sunshade between itself and the Sun. Once in a while it sweeps back and forth across the exosphere, off the disk of the planet, with the ultraviolet and visible spectrometer; and it also performs global scans as it departs using its gamma-ray and neutron spectrometer (magenta circles).

I took the opportunity of the press briefing to ask about image release plans. The cameras will not be on during Mercury orbit insertion, so there will be no images released right away. In fact, the cameras will not be turned on for a full two weeks following orbit insertion; they're taking the commissioning of the spacecraft very slowly to make sure that it is handling the challenging thermal environment at Mercury perfectly before getting science started. The formal mapping phase doesn't begin until April 4. Once it starts, they plan to release at least one image per work day, but there will not be a raw images website like the ones we've enjoyed from the rovers, Cassini, Phoenix, or New Horizons. The first release to the Planetary Data System will happen six months after orbit insertion, that is, September 17, and every six months thereafter. Their goal is for their first image release to include data covering at least the first two months after orbit insertion, possibly but not necessarily more.

Another reporter asked whether MESSENGER may have an extended mission beyond its one-Earth-year nominal mission. This is a question that's hazardous for mission staff to answer because they have to be very careful not to presume that NASA will fund them beyond their primary mission; it's for NASA to decide, because extended mission funding comes out of their program budget and can affect other missions. But in his very guarded answer Sean Solomon indicated that an extended mission would be possible, provided that they are efficient with their propellant use.

Of course they have to get into orbit first. Here is where I usually post a timeline of orbit insertion events. But the MESSENGER team did such a good job of laying it out in an easy-to-read table that I will just link to theirs!