Wednesday's sessions at the Lunar and Planetary Science Conference (LPSC) on the Deep Impact flyby of Hartley 2 were one of two that I was most looking forward to, the other being this morning's talks on Hayabusa's samples from Itokawa, about which I don't yet have any notes. I am again grateful to Franck Marchis and Andy Rivkin for sending me their notes on Hartley 2. As before, links mostly take you to PDF-formatted abstracts; unlike most conference abstracts, LPSC's are quite long and detailed, mini-papers. 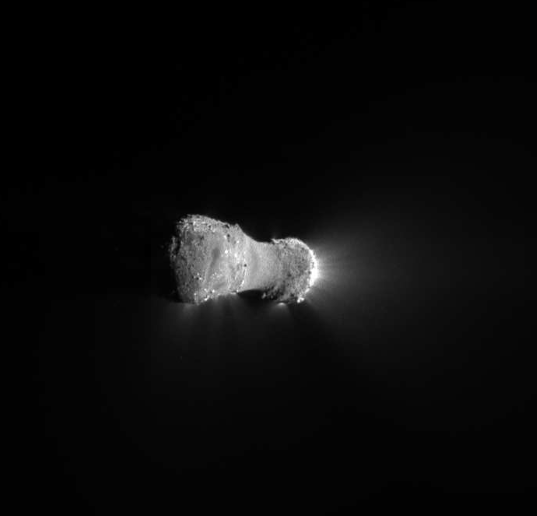 Principal investigator Mike A'Hearn opened the session with a description of Hartley 2 and its cometary activity. He described Hartley 2's morphology as having rough ends and a smooth middle. Images of Hartley 2, like Halley, both show jets even with the exposures set fast enough to reveal details on the nucleus; Hartley 2 and Halley have much brighter jets than other comets, where longer exposures were necessary to reveal jets. Deep Impact also showed that Hartley 2 is tumbling (in "excited state rotation"). There is a factor of 2 variance in the ratio of water to carbon dioxide production, though because of the tumbling it's not yet clear exactly how that maps back to the surface. It does appear that water production comes from the waist (the smooth middle) while other materials come from the ends. The waist appears to be re-deposited material, including ice. The cometary activity seems to be driven by carbon dioxide, and they see no carbon monoxide. This is in contrast to some other comets.

Peter Thomas reported on Hartley 2's shape and geological features. Hartley 2 has a mean radius of about 580 meters, with diameters varying from 690 to 2330 meters. The waist can be used to infer Hartley 2's density: it seems to be a deposition point so must be a gravitational low. The models that best fit have densities of about 0.2-0.3 grams per cubic centimeter (which is incredibly low). They really can't be much lower than that, though they could accommodate densities "about twice as high". This is a very unusual object in that it's a sedimentary environment that is globally shedding mass, so they're still working through lots of details. In Q&A, Thomas guessed the rubbly layers may be tens, not hundreds, of meters deep, but says they don't actually know.

Peter Schultz reported on Hartley 2's geology and how it relates to the jets. There are lots of different kinds of features on Hartley 2's surface, including "spires," "peaks," and "blocks." There's also a variety of jet morphologies, from "narrow," to "fan," to "diffuse." Some jets appear to be coming out of nighttime side of Hartley 2, which is quite strange. Narrow jets emerge from between spires, along bases of scarps, etc. Diffuse jets come from the collar (waist) region and are relatively depleted in carbon dioxide. It's not clear whether the spires are erosional remnants or constructional features.

Jian-Yang Li reported some numbers from a photometric analysis of Hartley 2's nucleus: its single-scattering albedo is 3.6%, its geometric albedo 5%. (Translation: it's very dark!) The albedo doesn't vary by much across the surface, only ±20%. Color-wise, it has a red slope of about 8% (meaning it's 8% brighter at red wavelengths than at blue wavelengths); if I'm not mistaken, this is a relatively low number for space objects, which tend to get redder with age due to various space weathering processes. Indeed, Hartley 2 is "bluer" than Tempel 1.

Two images from Deep Impact's Medium Resolution Imager taken just seconds apart near the spacecraft's November 4, 2010 flyby of Hartley 2 blink back and forth, which reveals the three-dimensional depth of Hartley 2's jets and the cloud of particles that accompanies it.

Skipping to Jessica's Sunshine talk on the icy grains in Hartley 2's coma: Franck noted that Jessica took time to thank the engineering team at JPL for their "remarkable" work in making this difficult encounter successful. She said that Hartley 2 appears to be active over 100% of its surface -- why? Looking at the unusual bright spots in the coma, they have to be centimeter- or even decimeter-scale to show up in the images, yet the best fit to spectrometric data assumes 1-micron sized ice grains, so the spots in the coma must be centimeter-size agglomerations of micron-sized grains. Yet the temperature is quite high, 300 Kelvin (30°C or 80°F); this suggests they're pure ice crystals, since impurities tend to depress the melting temperature of water. This ice, is similar to ice found in the ejecta from the Tempel 1 impact, but not Tempel 1's coma (no ice was seen in the coma). Interestingly, the water vapor in Hartley 2's coma is not at all correlated spatially with the water ice particles; ice particles correlate instead with the carbon dioxide in the coma; that suggests it's carbon dioxide jets that bring the ice particles out of Hartley 2's interior. So maybe pure, micron-sized ice particles are common in comet interiors.

Brendan Hermalyn presented what sounded like some really cool work tracing the paths of Hartley 2 coma particles as they moved from image to image. He said the largest grains were golf-ball- to basketball-sized (same as what Jessica said) and their albedo was high. Most of the motion from image to image doesn't represent fast motion of the particles; it results from spacecraft motion. With accurate navigational data it's possible to determine the location of the particle relative to the nucleus accurately, and from there map its trajectory and speed. Because the close-approach period spanned only 13 minutes, though, it's not possible to derive any meaningful measurements of particle acceleration/deceleration. Among the 50 or so tracked particles, the farthest one they tracked was located 28 kilometers from the nucleus; most were within 10 kilometers. The particles were observed to have low velocities, averaging 0.3 meters per second, with the highest at 1.7 meters per second. The low speeds and their closeness suggests they're bound to the nucleus. The grain motions are not radial, as might be expected; they're biased toward the anti-sunward direction, which implies that solar radiation pressure and jet effects act on short timescales, and also that they are aggregates of low-mass particles (which would be easier to accelerate). These are all preliminary results based on tracking the easiest-to-detect particles in MRI images; more work is needed on the less-bright particles and to include HRI data.

There was one canceled talk, during which Joe Veverka stood up and gave an overview of the Stardust flyby of Tempel 1, but I don't have any notes about that and there was only one Tweet about it, so it doesn't seem like he had much news to share other than that the flyby went great.

That's it for Franck's and Andy's notes. Again, many thanks to them for sharing them!