While scanning through the talks scheduled for this week's Lunar and Planetary Science Conference I came across the following talk title: "Interannual and Seasonal Variability in the North Polar Region of Mars: Observations in Mars Years 29 and 30 by MARCI, CTX, and CRISM." My first thought was "hey, cool research spanning a long time period and across data sets." But my second was "Mars years 29 and 30? What does that mean?" 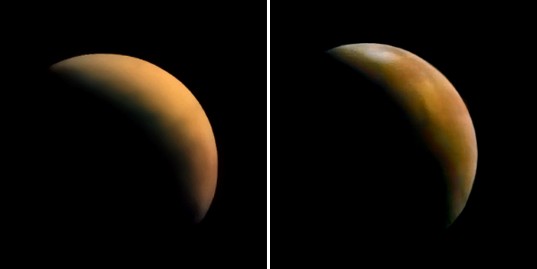 When the Russian orbiter Mars 3 arrived at Mars late in 1971, it found the surface of the planet to be almost completely obscured by an enormous global dust event. Several months later, the sky was finally clear enough to reveal surface features. The image on the left was captured on December 12, 1971, and the one on the right on February 28, 1972.

Clearly it's a way of marking the passage of time on Mars, but I didn't recall seeing such a thing used in an academic paper before. The agreed-upon method (where "agreed-upon" means "used by scientists publishing peer-reviewed papers") of marking time within a single Mars year is something called "Ls," read "ell sub ess," which is short for "solar longitude." Ls marks Mars' position in its orbit around the Sun, measured in degrees, from 0 to 360. As I explained on this webpage, Ls is 0° at the vernal equinox (beginning of northern spring), 90° at summer solstice, 180° at autumnal equinox, and 270° at winter solstice. Dust activity tends to peak a bit before the northern winter solstice, around 260°, though it can happen any time of the Martian year.

But that calendar resets with each of Mars' elliptical orbits around the Sun. Clearly "Mars years 29 and 30" refers to a way to count up the orbits, and it doesn't take much effort to deduce that it's counting up from some point in time near the start of the Space Age. A little bit of digging led me to a 2000 paper by Todd Clancy and several coauthors: "An intercomparison of ground-based millimeter, MGS TES, and Viking atmospheric temperature measurements: Seasonal and interannual variability of temperatures and dust loading in the global Mars atmosphere," which states:

The convention is described again in a 2010 paper by Bruce Cantor, Philip James, and Wendy Calvin: "MARCI and MOC observations of the atmosphere and surface cap in the north polar region of Mars," which includes a handy-dandy lookup table for Earth dates corresponding to Mars' seasons:

I haven't seen this convention used very often, but then there are not very many people who publish research that requires referring to years beyond the span of a given mission. Really it's just people who care about Mars' year-to-year weather who actually need to apply this convention. But it's not just climatologists who care about interannual weather variability; those of us who follow the adventures of landed Mars missions care about variations in weather, too. So, adopting this convention for naming the Martian years, and using solar longitude as the most accepted method of marking time within a year, here's a Martian timeline of interesting events in Mars exploration. And thanks to Aymeric Spiga for pointing out this handy online Earth-to-Mars date converter.

So Mariner 4's images came from year 6, late in the northern summer. Mariner 6 and 7's images came a little more than two Mars years later, a little after the equinox had brought sunlight to the south pole and darkened the north. Mariner 9 and Mars 2 and 3 all arrived another Mars year later, year 9, right around the southern summer solstice; Mars 2 and 3 lasted through the next equinox, and Mariner 9 through the next solstice. Mars 4 and 5 arrived right at the northern vernal equinox in year 11.

The Vikings came in year 12, around the northern summer solstice, so they saw a very differently lit Mars to what Mariner 9 imaged, at least at first. Of course those missions also lasted a long time. Viking 2 Orbiter lasted almost exactly one Mars year; Viking 2 Lander and Orbiter about two Mars years; and Viking 1 lander an amazing three and a half Mars years, most of the way through year 15.

There followed a long drought in the Mars program. Phobos 2's brief mission came around the equinox beginning year 20, but that was the only mission at Mars in the period from year 16 through year 22.

The resurgence of Mars science began midway through year 23, very late in northern summer, when Mars Pathfinder landed. It survived until close to the northern autumnal equinox, when Mars Global Surveyor arrived. That orbiter was still active near the southern summer solstice in year 25, when Odyssey joined the party; and both were active late in the southern summer of year 26 when a flotilla of spacecraft (Nozomi, Mars Express, and the Mars Exploration Rovers) flew past, entered orbit, or landed. Spirit lasted through at least three and a half Mars years. All the rest of the orbiters except Mars Global Surveyor are still operating now, late in the southern spring of Mars year 30.

What do you think? Is this a valuable way of looking at Mars time?