The Kepler exoplanet hunting mission has made news today with a report of "its first rocky planet." However, as the Bad Astronomer explains, while "rocky" is an accurate description of its composition, this thing is so close to its star and so hot that it's probably quite molten. The search for a truly Earth-like planet is not over!

EDIT: It's also well worth reading Franck Marchis' take on the announcement. 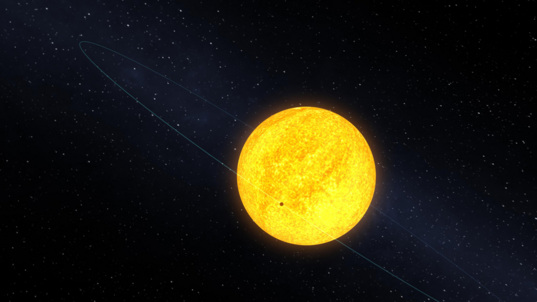 Measuring 1.4 times the size of Earth, Kepler-10b was, at the time of its discovery in 2009, the smallest planet known outside our solar system. (Many smaller ones have since been discovered.) It is a rocky planet with a mass 4.6 times that of Earth and with an average density of 8.8 grams per cubic centimeter (which is significantly denser than Earth's 5.5).

A paper published last week in Science Express reports that a re-analysis of data from the Apollo Passive Seismic Experiment (PSE) indicates that the Moon has an iron core and that its outer part is fluid, like Earth's. The newfound lunar core is small, though, with a radius of only 330 to 360 kilometers (giving it about 20% the Moon's diameter). Chuck Wood has a brief summaryover at Lunar Picture of the Day.

Cassini has its third close flyby of Rhea in about 8 hours, at an altitude of only 69 kilometers. There's the usual preview on the JPL website, and detail on the imaging plans by Jason Perry over at CICLOPS.