What's the significance of this unremarkable spot on the Moon?

This was a fun image released by the Lunar Reconnaissance Orbiter Camera science team. Take a look at it and see if you can figure out what the significance of the red arrow is. I'll give you a hint: it doesn't have anything to do with any past mission to the Moon; it's not a landing or impact site for any spacecraft, past or future. 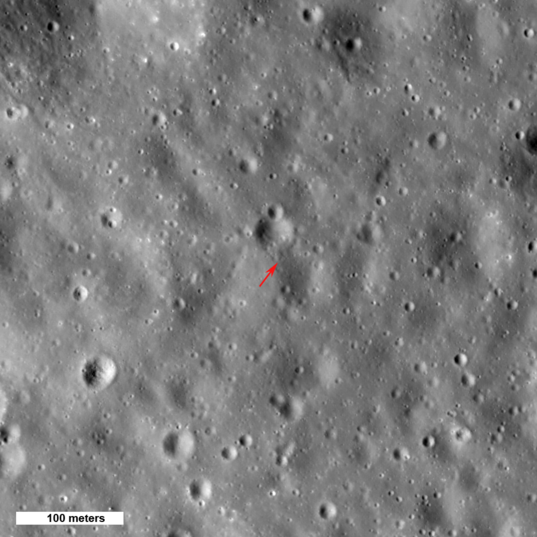 Guess why the red arrow is there!

Stumped? Let's back out of the image a bit. Here is some wide-angle context. The white arrow points to the area seen in the zoomed-in image above. 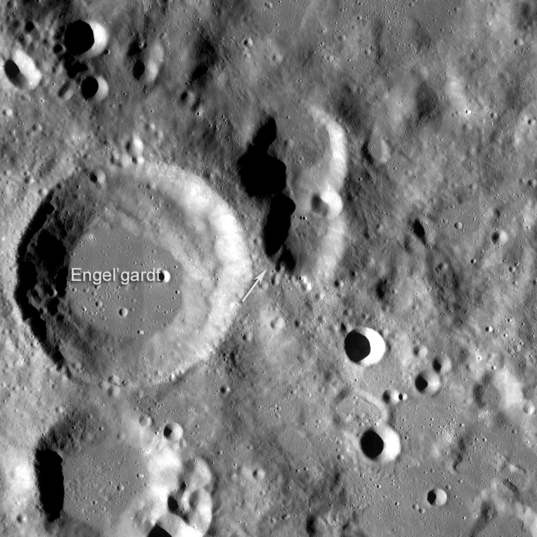 Engel'gradt crater (named after Russian astronomer Vasilij Pavlovich Engel'gradt, 1828-1915) is 44 kilometers in diameter. North is up. Mosaic width is 100 kilometers.

Do you give up yet?

The red arrow points to the highest-elevation point on the entire surface of the Moon, which measured 10,786 meters above the mean lunar elevation. That's kind of crazy, isn't it? It doesn't look anything like the highest point on Earth — or, for that matter, on Venus or Mars. Earth, Venus, and Mars' high points are all in mountains. On Earth and Venus the mountains were built by tectonics, forces arising from within the Earth that cause compression of the crust. When you squeeze something from the sides, it squirts upward; that's what's built the Himalayas on Earth (and Mount Everest at 8,848 meters above sea level), and Maxwell Montes on Venus. Mars appears to have lacked those kind of mountain-building compressional tectonics, but it compensates with the biggest volcanoes in the solar system; its Olympus Mons rises 24 kilometers above its surrounding plains (and 21 kilometers above Mars' mean elevation).

This lunar high point doesn't look like either type of mountain, tectonic or volcanic. It's just kind of a nameless spot in the middle of a fairly typical-looking highland landscape with lots of craters. This high point wasn't built by tectonic or volcanic processes; it's just a spot where the ejecta from one of the solar system's greatest impact craters, the south polar-Aitken basin, happened to pile to its deepest level, and was not subsequently whittled down by other, smaller craters. It's possible that a couple of later impact craters (like Engel'gardt) piled more stuff on top of the spot.

Given that it's so flat and unassuming, how did the Lunar Reconnaissance Orbiter team even find it? The general area of the highest elevation spot on the Moon was first identified with Lunar Orbiter Laser Altimeter (LOLA) data, then the Lunar Reconnaissance Orbiter Camera was commanded to capture a stereo pair of images of that area from which a digital elevation model could be generated, and they found the high point within that model.