The Mars Exploration Rover Opportunity has been driving, driving, driving, as the terrain between her and the rim of Endeavour crater gets steadily easier to traverse. In the last few days, she's passed by several craters, and the rover drivers took advantage of the chance encounters for what they call "drive-by shooting" (a phrase I can't say I'm particularly fond of, but they didn't ask me). In a way, these sets of images are like Cassini's nontargeted flybys -- they're opportunistic photos. These spots aren't considered worth expending the time and energy for Opportunity to park at them and do a detailed survey, but they're worth imaging as she passes them by.

To orient you, here's a screen cap from Google Mars. 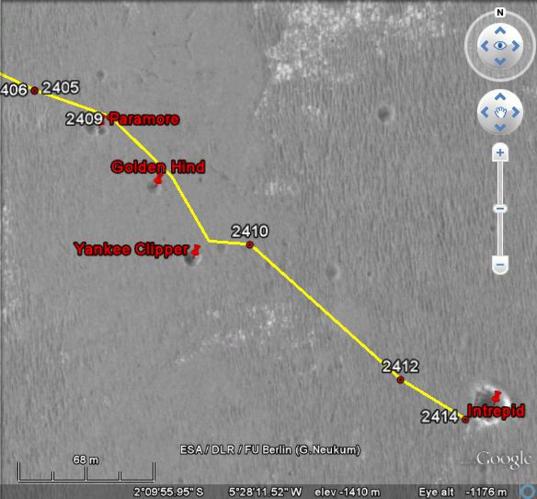 Opportunity's position as of sol 2415

In the week prior to sol 2415 (November 9, 2010), Opportunity racked up the meters as she drove past several small craters, including "Paramore," "Golden Hind," "Yankee Clipper," and "Intrepid."

At the beginning of sol 2409, Opportunity was parked at a little double crater named "Paramore":

On sol 2409 (November 4, 2010), Opportunity finished her driving at a very small double crater named "Paramore," lying off of her position to the south. The pair of craters is about 12 meters wide. To the left (east) of the doublet are a few smaller craters; they may all have formed in a single event, from a fragmented meteorite.

Continuing on, she passed another crater, slightly larger than Golden Hind, named "Yankee Clipper." Those images haven't been relayed back to Earth yet. She continued past Yankee Clipper for a good 20 or 30 meters before finishing up for the day. On sol 2412, she headed toward the largest crater in the neighborhood, Intrepid. This one has some nice exposed bedrock, so they clearly figured it was worth a quick stop, and drove to its edge on sol 2414 before taking some photos on sol 2415:

On sol 2415 (November 9, 2010), Opportunity paused her marathon drive to take in the view of Intrepid crater, a hole about 17 meters in diameter.