Moon Zoo is ready for you

I've always thought citizen science projects like SETI@home and Stardust@home were very cool and a fantastic use of the time and interest of enthusiastic space fans, but if you're a regular reader you know that above all else I love looking at pictures of planetary places. So I'm delighted to point you to a citizen science project for wannabe space geologists like me: Moon Zoo.

What exactly is the science you'll be doing if you participate? Crater counting. This is a task that is perfect for a distributed application like Moon Zoo. The spatial density of craters of given sizes on the surface of a terrestrial planet relates directly to the age of that surface. Since the Moon has no atmosphere to defend it from incoming space rocks, its surface is a faithful record of the rate at which things in this part of the solar system (such as Earth) get whacked. On top of that, the Moon is the only body beyond Earth from which we have returned samples from known locations that are suitable for age dating. So the Moon is the place where we can tie the chronology determined from isotopic age dating of rocks to the chronology determined from crater counting. So the better the crater counts we can get for the lunar surface, the better we understand the chronology of every solid body in the inner solar system.

But crater counting is so, so tedious. Many a graduate student has gone half-blind from hours spent stooped over printouts of space photos on light tables in windowless labs, tediously marking craters. Now you, too, can have that fun. Ha. Actually the experience in Moon Zoo is much less arduous, because they've done such a good job of creating an interface that makes it easy to display the images and mark the craters. And instead of one student marking dot after dot on map after map, Moon Zoo harnesses you, a veritable volunteer army, to count craters of small segments of the Terabytes of Lunar Reconnaissance Orbiter images. Honestly, I don't know how all these data could get looked at without a distributed Internet project like Moon Zoo.

OK, so how do you get started? They make it easy. Go to moonzoo.org and click the "How to Take Part?" button on the left side, and watch the video. Pamela Gay's dulcet voice will explain how things work. 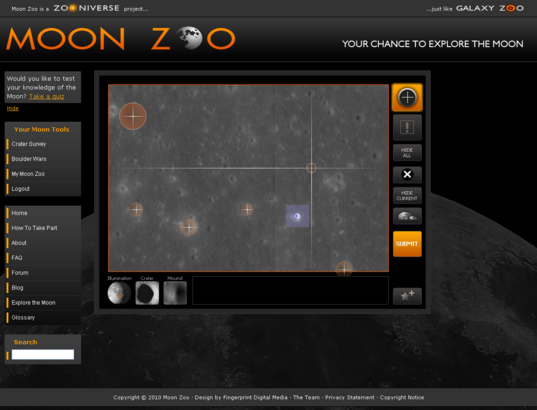 I tried it for myself. The very first image I got was covered in boulders and seemed to have no craters larger than the cursor, which was a bit disconcerting. The next one was a bit of highland terrain covered in tiny craters. It was a bit of a challenge to locate the subdued rims of the larger, older craters. Squinting helps, because it lets you spot the subtle shading that marks the locations of these subdued depressions in the lunar soil. My third image was much easier to map. And my fourth...and fifth... Every time I hit the "submit" button, it loaded a new image, so before I knew it, I'd spent half an hour clicking away at images. Very sneaky of them!

This really is a way that you can help lunar science, so I hope you will all at least try it out, and that some of you will get addicted!